Saturday in the park,

I think it was the Fourth of July

And I’ve been waiting such a long time

Chicago sings Saturday in the park, a song that recalls a day in a city park in the United States. There are people dancing, the ice-cream man, and later on, an artist who plays the guitar, as well as people laughing and celebrating. Surely we can picture more activities to continue the song. Ourselves running or stretching after training, a group doing yoga, a bunch of kids climbing a strange structure while screaming, or teenagers sitting around eating and drinking. The park is a refuge away from the concrete jungle. It’s a sunny day, and we are escaping from the working days. But has the park always been a part of the city? 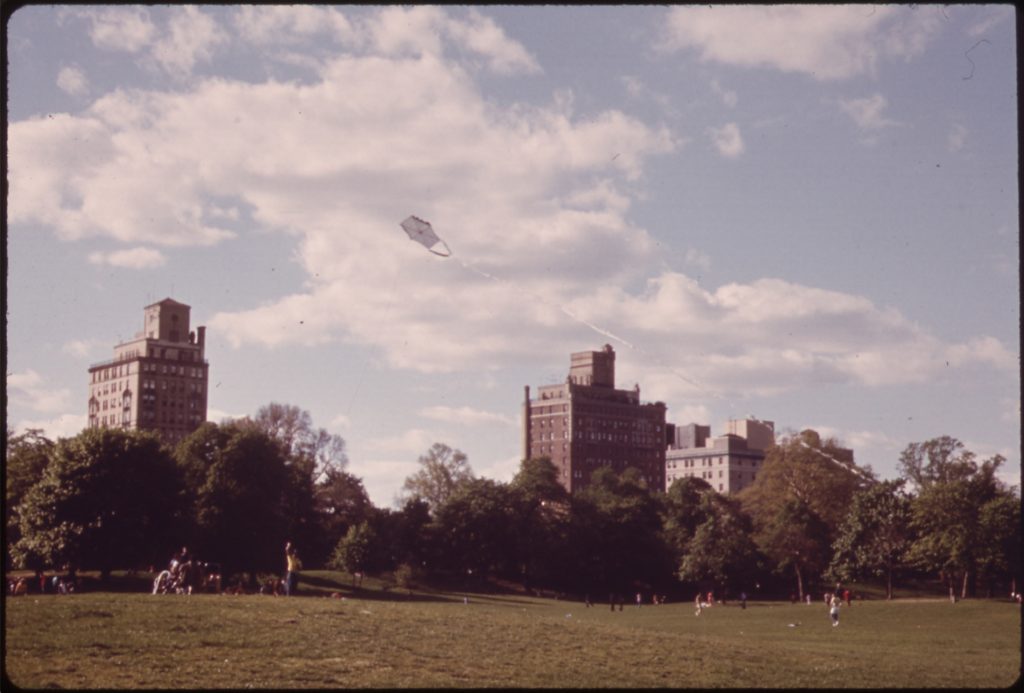 Suzanne Szasz, Part of Brooklyn’s 526-acre prospect park. The park offers a variety of facilities for outdoor recreation, and includes a zoo and a quaker graveyard, 1973. Via Wikipedia Commons.

Actually, the urban park is something quite recent. It was the 19th century that gave it a role in urban history. Demographic pressure, overcrowding and pollution defined the cities of the time. Parks appeared as a response to these issues. This way the designed landscaping common to the gardens of the upper class villas was displaced as a public facility to the city. The first parks opened in Great Britain, pioneer of the Industrial Revolution. There, the English garden presented nature as a reconstituted “setting”, that is, as a natural environment that was no longer wild but commodified.  Western thought, for its part, saw nature as a distinct element, separated from social space. Thus, the park created a new form of mediated encounter between the social and the “natural”.

For the hygienist trends that emerged in the 19th century, parks had not only an aesthetic sense, but above all a functional one. Health and hygiene policies began to be implemented at that time in the new big cities. These included the creation of wide avenues and new urban layouts, such as the Cerdá Plan –which we have already discussed in this article– and the remodeling of Paris led by Haussmann.  The 19th century urban park provides a venue where society reconciles with what is beyond the city. It is also a place where the body can relax after industrial work. With the implementation of parks, certain normative ways of using urban space became common. 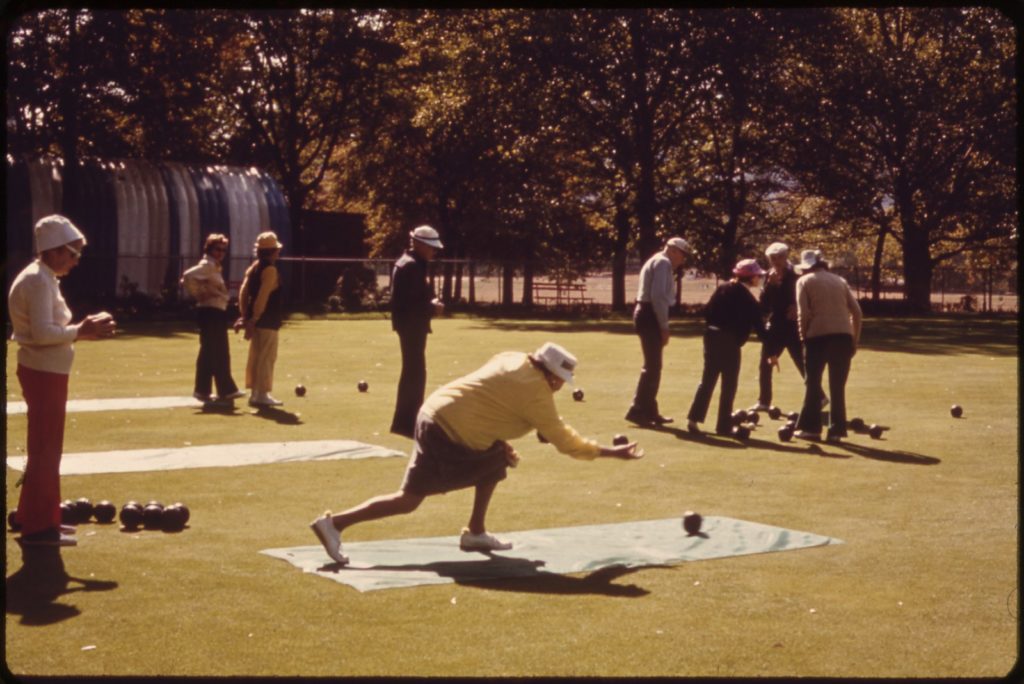 Suzanne Szasz, Members of the bowling green bowling club meet for a game in Central Park. The New York City Department of Parks waters the fine turf, and club members, who meet three times a week, tent a flower border themselves, 1973. Via Wikipedia Commons.

The parks were prepared for activities that favored good physical and moral health, ranging from walking or relaxing to practicing sports. They were also places to watch and be seen, especially by members of the bourgeois middle class. To this end, the promenades, rest areas, benches and gazebos were designed. They were intended for the romantic but decorous meeting of heterosexual couples. 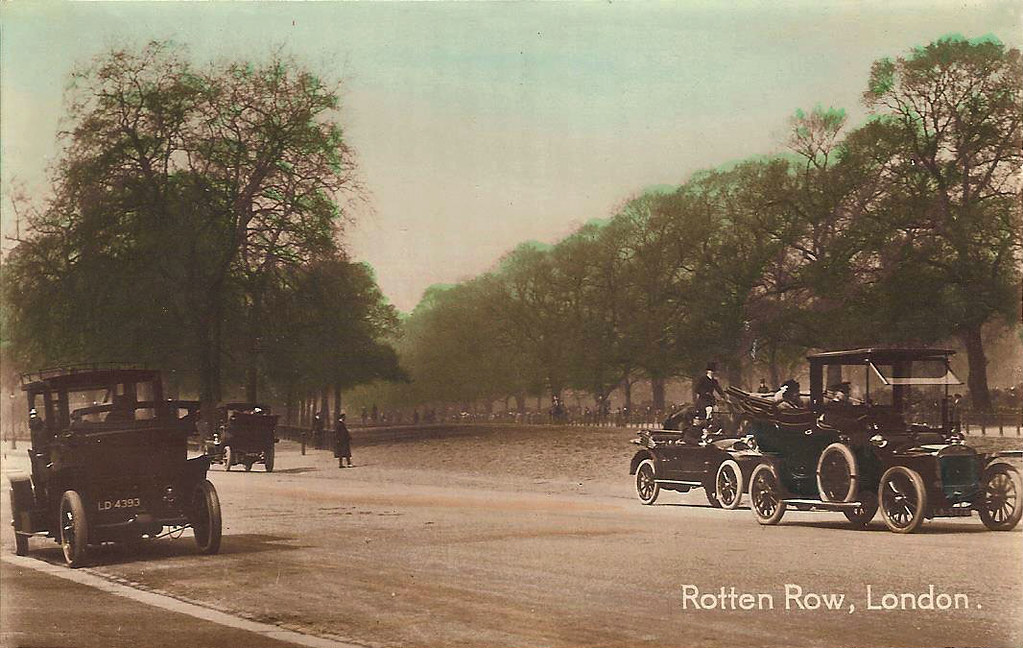 By 1850, Saint James Park, Green Park, Hyde Park, and Kensington Gardens in London already formed a four kilometer network of parks in the center of the city. Regent’s Park, Victoria and Battersea Park were also located in other areas of the city. While Regent’s Park, designed by John Nash in 1812, is the most characteristic example of a 19th century park in the British capital, Hyde Park is the London park par excellence.

Hyde Park, which was originally a royal hunting ground, opened to the public as early as the 17th century. In 1726 the first coherent landscape design of the park was started. At that time, Lake Serpentine was formed by damming the Westbourne River. The resulting landscape was that of an idyllic, domesticated countryside enclave in the large city of London. By the 19th century, Hyde Park already had many of the typical infrastructures of a modern metropolis. The Crystal Palace, of which we have already spoken in this article, was built in 1851 to house the Great Exhibition. This event is considered central to the birth of industrial design. Another facility typical of modern Western society was the Lido, which opened in 1930. The Lido provided swimming and sunbathing amenities. These were requested by the Sunlight League, a naturist group. 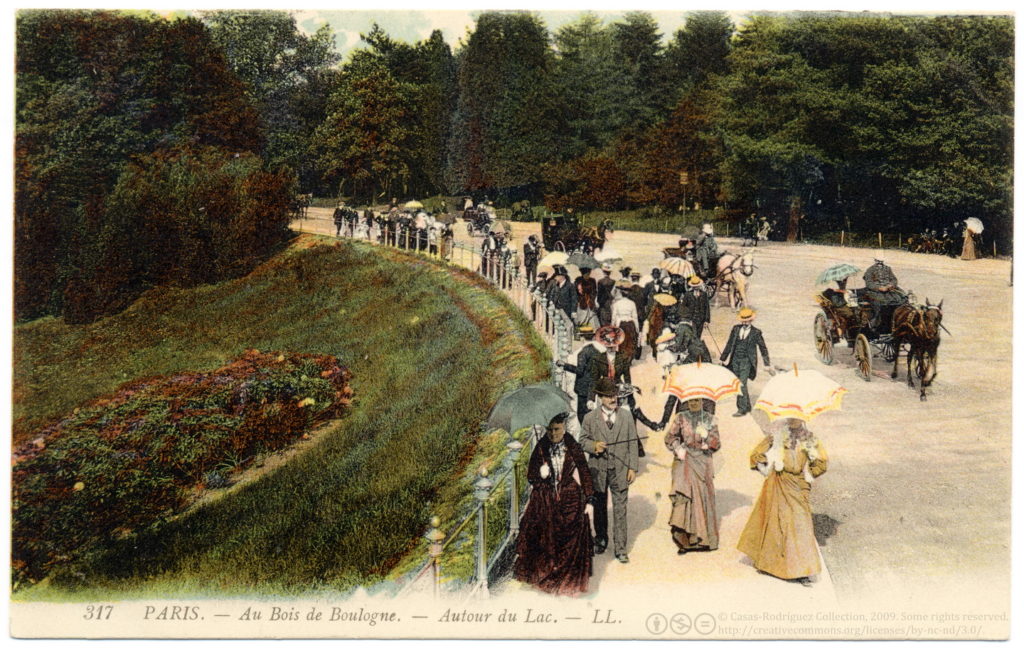 In France, Emperor Napoleon III, during the years of the Second Empire, promoted the opening of new public parks as part of the Haussmann Plan. By 1850 Paris had only the Champs Elysees, the Tuileries, the Royal Palace Gardens, the Luxembourg Gardens and the Jardin des Plantes. Under Haussmann’s scheme the Bois de Boulogne in the west of the city, the Bois de Vincennes in the east and three other smaller parks were added: Mongeau, Buttes Chaumont and Monlsouris. The works for these urban facilities were coordinated by Jean Charles Aclolphe Alphand.

French landscape designers thought of parks as aesthetic compositions. In the case of Bois de Boulogne, a former hunting ground, there was a casual redesign that opened up lawns, planted beeches, cedars, chestnuts, elms, and exotic species such as redwoods. Inspired by English designs, sinuous paths and rocky formations were created. Two lakes, a smaller one and a larger one with islands, were created and connected by a waterfall. Their excavation enabled the raising of the height of an existing hill. Panoramic views were designed over the most picturesque surroundings. This landscape gathered the most dramatic elements of the countryside. 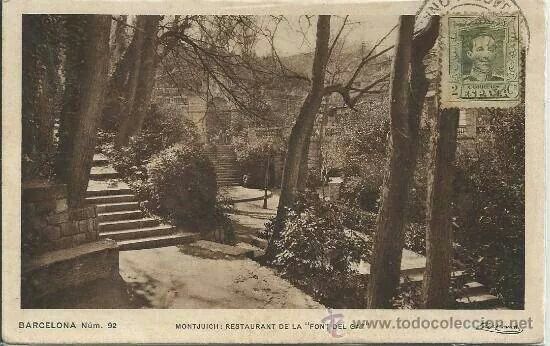 In Spain, the intimate and secret Arabic garden, divided into sections, influenced the landscape architect Claude Nicolás Forestier, who designed many green facilities in Spain. These included the Maria Luisa Park in Seville and the Montjuic Park in Barcelona, at the beginning of the 20th century. The gardens in Montjuic are a good example of this particular formal approach, which does not follow English tradition as much as Hispanic-Arabic tradition.

On Barcelona’s Montjuic hill, Forestier designed Laribal, Grec and Umbraculum gardens. Once again, they were linked to a typically modern event, since their construction began on the occasion of the 1929 Barcelona International Exhibition. In the Laribal gardens, located on the slope of the Montjuic mountain, Forestier incorporated typically Muslim elements. The water paths in the handrails of the staircase that go down the hill are very characteristic of this. They were inspired by the gardens in the Generalife of Granada, of which we spoke to you a few months ago. Thus, in the gardens of Laribal, fountains, benches and tile decorations, water games and flower pots on windowsills and banisters, remind us of Granada. The stairs with ponds and fountains on the landings and waterfalls on the handrails, called, in fact, Generalife Stairs. 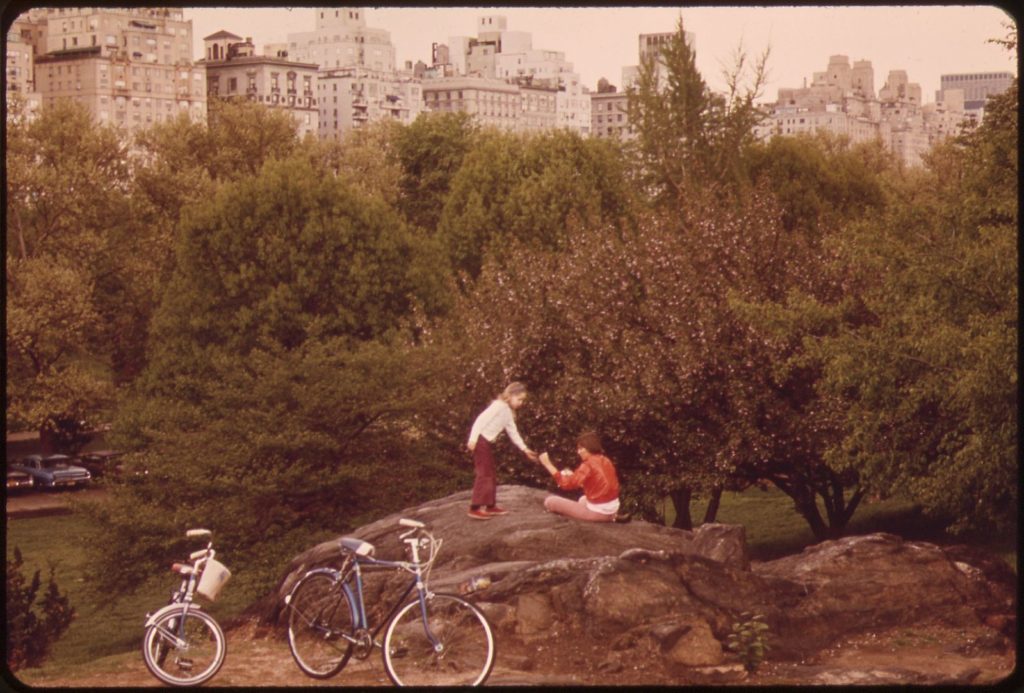 Suzanne Szasz, Bicyclists in Central Park. On Sundays the drives through the park are closed to motor traffic, and cyclists become lords of the road, 1973. Via Wikipedia Commons.

In the United States, cemeteries already had a strong social component as a meeting place. However, it was also the 19th century that gave way to the American urban park. Around 1850, the enormous grid in which the island of Manhattan, in New York, had been organized, was threatening to get filled. To save an area of the island for recreation was urgent. This led to the designation of a large section in the center of the island for a city park. In 1858 Frederick Law Olmsted and his partner Calvert Baux won the competition to design the most portrayed park in the history of cinema, Central Park.

Delineated by the grid of streets that characterizes Manhattan, Central Park has a rectangular shape. Its borders consist of tall, typically New York City skyscrapers. The landscaping proposed by Olmsted manufactured and condensed a piece of countryside within the urban fabric. The internal roads were sinuous and were differentiated between those for cars and those for pedestrians. Artificial lakes and hills participated in the creation of a varied and picturesque landscape that was totally artificial. Central Park is a synthetic of ” nature ” that makes modern life in the big city bearable.

Digging of the lakes of Palermo in Buenos Aires, Argentina. At left, a Buenos Aires and Pacific Railway train, 1906. Via Wikipedia Commons.

In the first half of the 19th century, Buenos Aires’ governor, Juan Manuel de Rosas, bought many lands in the Palermo area of the city. He built a villa surrounded by fields in which native and European species were mixed. As Rosas was expelled from power, the property passed to the State and in 1874 President Sarmiento ordered the transformation of the place into a public park. February 3 Park had Charles Thays, a Parisian who had arrived in Argentina in 1889, as one of the main authors of the design.

Outstanding among the park’s spaces are the artificial forests created from the seeds Sarmiento received from Europe, yet which merge with the mass of trees that predominated in the landscape at the time of the city’s foundation. The woods were assimilated as an urban recreational space. The desire to import European ideas was made explicit in the president’s declarations upon the inauguration of the park. “In its artistically formed forests, to give shade and light to the landscape, as much as the arts, the good taste and the feeling of beauty that the parks of Santiago de Chile, New York, Paris and London offer, as a charm to the imagination or an appeal to the highest feelings of man”.

To conclude, the contemporary urban park is heir to its nineteenth-century roots. It is configured as a green space that domesticates the non-urban elements typical of the countryside. It condenses them pleasantly within the city limits. Strongly influenced by the picturesque ideas of the English garden, evolving then within other aesthetic frameworks, it maintains throughout its history its main will, derived from the hygienist trends. The park favors the development of rest and relief activities. It also favors the physical well-being of the body. In addition, the park facilitates the meeting of people in the open air within the framework of urbanity and civility that modern cities predefine.

The park, as a social meeting place, has undoubtedly also been a framework for the imagination and reinterpretation of the uses of space by citizens. Within its limits, rules and lifestyle have been rethought in ways that, although escaping this article, have been key to life in the contemporary city.