Water has been widely depicted in the history of art. It has also been the protagonist of many architectural designs, since it is an essential element for living. We have already discussed water in architecture from an infrastructural point of view in this article devoted to the Kuwait Water Towers and the Salime Dam. Now we look at a building and a painting where water creates poetry.

Water is a classic motif in painting. It has been painted in the form of streams, rivers, lagoons, seas and oceans. Also it has been painted in its meteorological form: calm clouds, storms, and rainbows. Moreover, since art is a reflection of a society, painted water reflects a specific time and place. Thus, for example, Sorolla painted the bourgeoisie on the beach when sea baths became popular as a healing practice.

Water in architecture is a technical problem, since water must be supplied in towns and cities. The Islamic culture with great skill developed unique technical devices to supply water —and this inspired us in our project for the conditioning of the Arrixaca archaeological site. In addition, this culture incorporated a symbolic dimension to water. Because of that we will talk about an Islamic example of architectonic use of water in this article.

The Generalife’s play of appearances

Here we can find the Koranic garden, present in the Escalera del Agua, or the garden of Persian origin, in the Patio de la Acequia. In both cases we are looking at Paradise Gardens, and when visiting time is over, we face the sad reality of being expelled from Eden.

José Miguel Puerta Vílchez, The poetic construction of the Alhambra.

The Generalife was the country house of the Nasrid kings. The palace was built at the end of the 13th century by the second sultan of the Nasrid dynasty, Muhammad II (1273-1302). It was designed as an architecture integrated into the surrounding orchards and gardens. Its name may mean «the architect’s orchard or garden», or «the most exquisite garden».

As you walk through the Generalife, you will find many different in which water is used. The entrance is through two enclosed courtyards with vines and orange trees. These patios will later inspire the Cármenes of Granada, beautiful small urban properties with a house, an orchard and a garden, enclosed by high white walls.

The route will then take you to the well-known Patio de la Acequia. It is quite elongated, with a water channel that marks a longitudinal axis. This is the Royal Irrigation Ditch, which used to supply water to the Alhambra, the Generalife and the orchards. In the background one can see the Royal Hall, beautifully decorated with plasterwork and with impressive views of the landscape and the Alhambra. This garden was designed based on the Arabic scheme of a four-part patio, Char-Bagh. It is of Persian origin and widely spread in Andalusia. We wrote about it in Translating between garden and paradise, a few entries back in the blog. This kind of garden has two perpendicular axes in which four channels carry water to a central fountain, referring to the four rivers of paradise, full of milk, honey, wine and water. Since this is a long and narrow courtyard, in this case the transverse axis of the Char-Bagh is only insinuated by the vegetation and a low fountain. 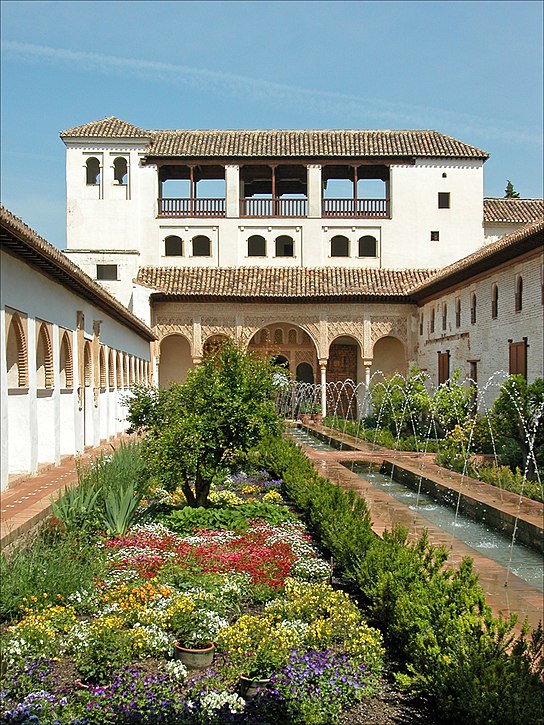 Patio de la Acequia. The water dispensers are an addiction made in the 19th century. Image via Wikipediacommons, Jean-Pierre Dalbéra.

Next, the route will take you to the Sultana Patio, where the Generalife bath was located. This bath was lost at the beginning of the 16th century. Now the garden is landscaped with a large U-shaped pool surrounded by myrtle hedges.

From here we will arrive at the Escalera del Agua (or water staircase). This is an element of great beauty, which has the typical characteristics of the Islamic garden, since it masters topography, water and vegetation. This staircase leads to a small chapel and viewpoint at a higher level.

Here, shading gives permanent comfort. This is achieved through a closed vault of laurels along the entire route. The ground is designed to take advantage of the rays of light that pass through the foliage, built in simple materials: small stone edges. The staircase landings are decorated with fountains. It is actually water that is most surprising: the staircase’s handrails are two whitewashed channels made of tiles and bricks. Water from the Royal Canal flows through them. These small waterfalls fill the air with freshness and sound pleasantly, making the climb a near-dream experience. 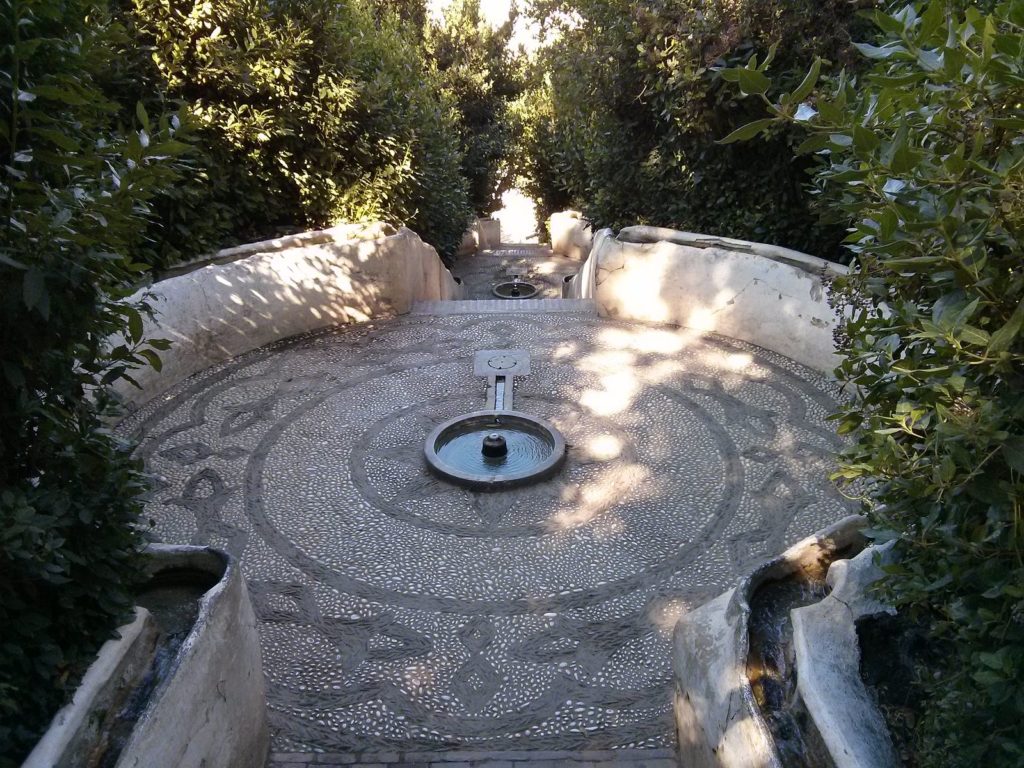 The Muslim builders designed these gardens as a work of fiction, as the Arabist and art historian José Miguel Puerta Vílchez points out. The architecture was configured through a game of appearances formed by walls, columns, arches, domes, fountains, vegetation, natural and artificial light, inscriptions and decoration, reflections and aromas, whose objective was to give a tangible form to paradise.

Water as an allegory of life in The Voyage of Life

Water has a very different role in the series of paintings The Journey of Life, by the American painter Thomas Cole. It also takes us beyond the functional, but in this case through the use of allegory. Allegory aims to give an image to what does not have one, and so did this painter using the image of a river to talk about the passage of human life.

Thomas Cole was born in the United Kingdom and at a very young age emigrated with his family to the United States. He would return to the old continent as a young man, to study painting. Back in the United States, in 1832 he painted The Course of the Empire. Like The Journey of Life, this work is a narrative series, consisting of five paintings. With a message that today seems very contemporary, concerned with the destruction of nature, Cole captured the same landscape in five moments. First, he represented it at a time when there were no human beings. Then, already with them, this place appears without any intervention. In the third painting, The Imperial Consummation, Cole presents the landscape with magnificent buildings. In the following painting, these buildings are being destroyed during a war. The fifth painting, entitled Desolation, shows a ruined landscape.

His series The Voyage of Life also depicts a temporal development, comprising a person’s childhood, youth, maturity and old age. The biblical image of the river of life together with the season’s cycle are used as allegories for each stage of life. 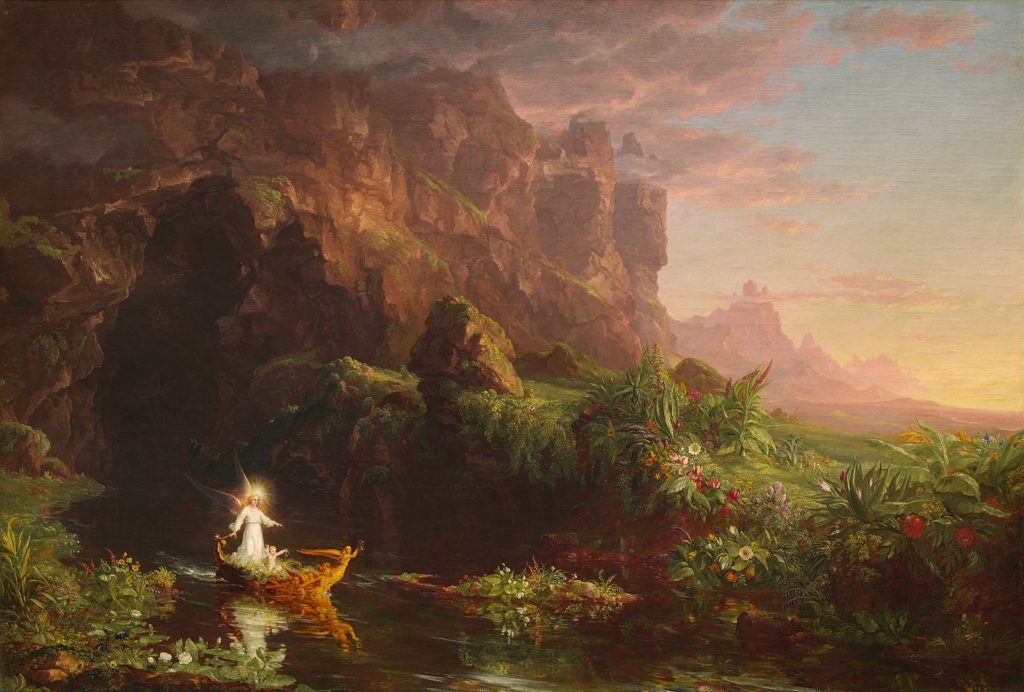 In the first painting of the series, Childhood, the artist painted a flourishing, springtime landscape with a clear sky and shining sun. A baby rides in a boat that sails the river of life, guided at the helm by an angel who guards it. Under the baby, a bed of flowers is a symbol of newly emerging life. On the bow of the boat, an hourglass stands for the passing of time. The cave from which this boat emerges represents the mother’s womb. 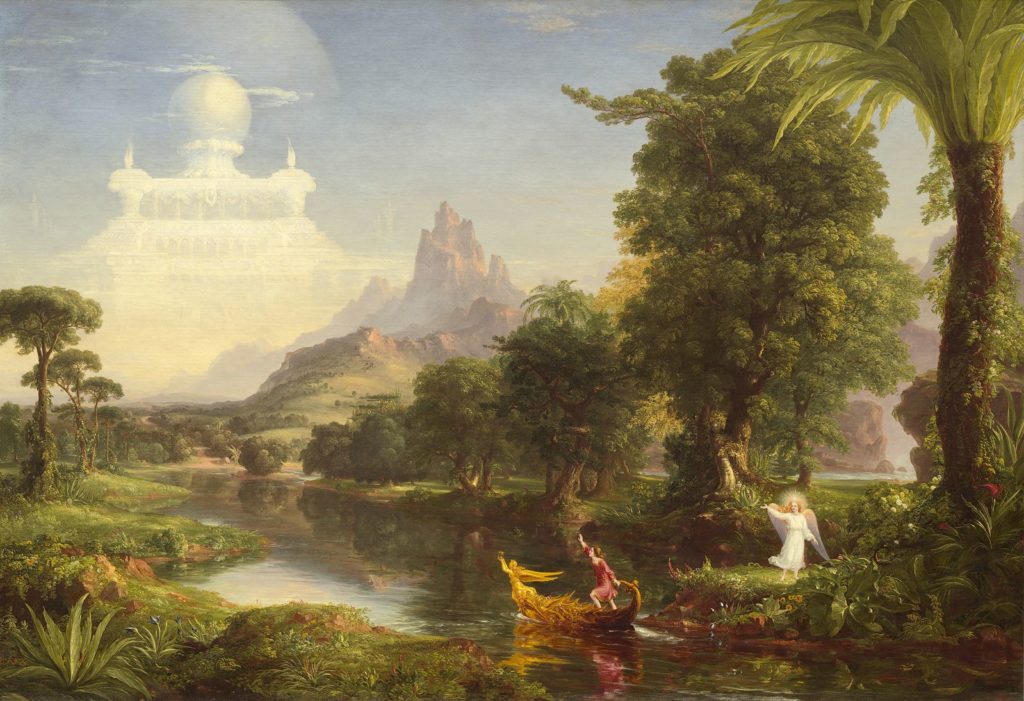 The second painting, Youth, shows a quiet river where the boat moves forward among palms and trees in a summer season. The young man in the boat, already sailing alone, observes the image of a palace appearing up in the sky, symbol of dreams and ambitions. 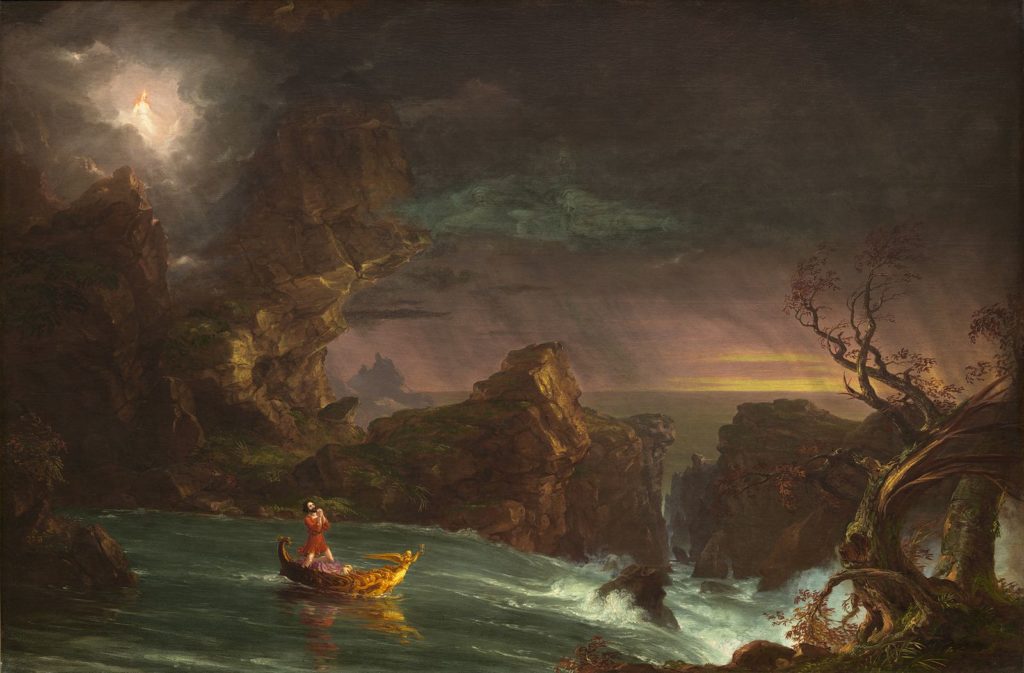 Maturity is represented in the third painting of the series as being of a less positive nature. The sky is dark, and in the background the sun sets. The river is turbulent and the landscape is arid. The boat heads for some rapids and the protagonist prays while the angel watches him helplessly. 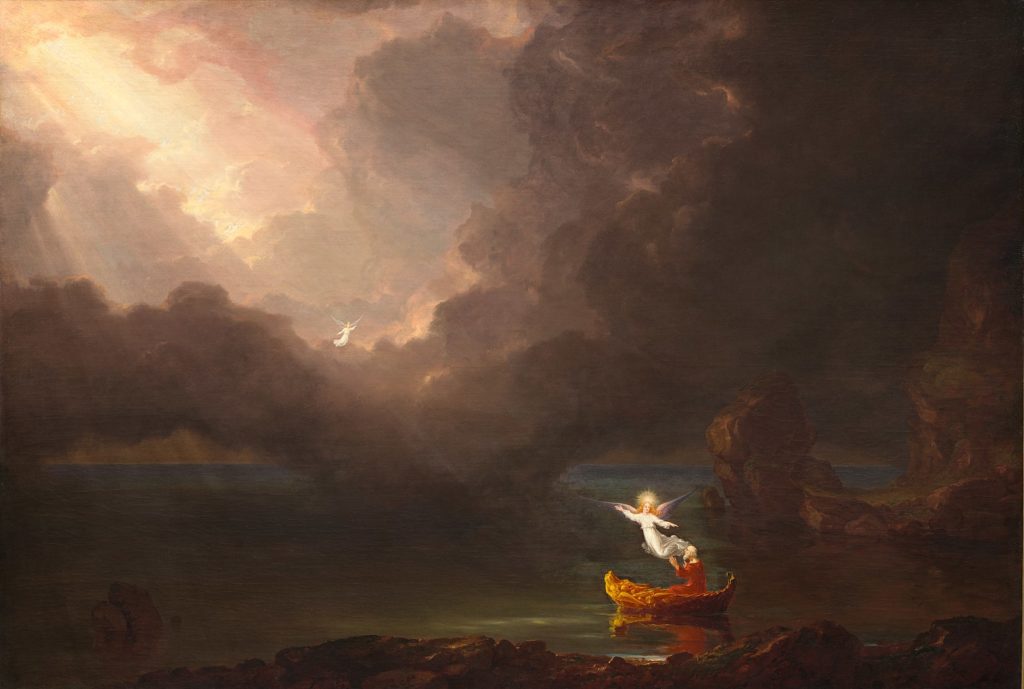 Old age feels somewhat more optimistic. The boat ends up in a calm sea. The angel shows the man the afterlife, which appears in the form of a few rays of light. The boat has lost its figurehead and with it the hourglass, symbol of time, which has ended.

Thomas Cole is considered the founder of the Hudson River School. This artistic movement of the mid-19th century was concerned with the realistic representation of nature. It was strongly influenced by European Romanticism, but at the same time it was based on a nationalistic pride that celebrated the American landscape. It also had a religious character very typical of the American cultural manifestations of the time. Nature was understood as a work of God. Thus, The Journey of Life was a moralizing and didactic project where the landscape shared protagonism with the religious faith.

It seems inevitable to connect Cole’s series with the famous film The Swimmer, which we already mentioned in A Private Splash, the article we dedicated to the rise of the modern swimming pool in the United States in the mid-20th century. In this film, the protagonist, played by Burt Lancaster, swims all the way to his house, from pool to pool, through an upper-class residential area. This seemingly playful trip is actually a life journey. Although initially the film seems to take place over the course of an evening, another discordant temporality is shown simultaneously. As the minutes pass, the leaves on the trees fall and the weather becomes colder. Just as the climate hardens, the character’s decadence becomes stronger. His initial joy withers as signs of a great personal and professional crisis are shown, coinciding with the sunset of the day. The film shows the breakdown of the American suburban man, the grandson of Cole’s generation.