The arcade of Nuevos Ministerios —la Arquería— was conceived by Secundino Zuazo as a mediating filter between the urban space and the garden of a new ministerial complex. Recently an architectural competition has been called to create an Art Center in the Archery, in which the proposal by AGi architects has received a second prize.

Nuevos Ministerios sketch of the 1930s by Secundino Zuazo.

This group of buildings, dedicated to the Spanish Administration, was built after the tearing down of the old Madrid Hippodrome, in what was in the 1930s a border area of ​​the city. This demolition allowed the extension of the Paseo de la Castellana, a great avenue drawn by the same architect, Secundino Zuazo, and Hermann Jansen. La Castellana would be the main axis of Madrid’s expansion to the north. The construction of Nuevos Ministerios began in 1933. After the Civil War, Zuazo was removed from his position, and replaced by a team of engineers and architects. It was them who made the decision to change the brick facade designed by Zuazo for the one executed, in stone.

Nuevos Ministerios exhibition hall was inaugurated in 1983, and served the Ministry of Housing. The exhibition space was located in a newly closed space under the arches. The project, by José María Aparicio and Adolfo Morán, glazed a total of 10 gaps. Its interior showed up to 10 plastic vaults that joined the arches, and that contained the lighting rails.

Initial adaptation of the Archery by José María Aparicio and Adolfo Morán in 1983. Image obtained from the research carried out by Elena Utrilla.

Only two years later, Ramón Vázquez Molezún did the first remodeling of the exhibition room, replacing the vaults with a system of rails. In 1988 Alejandro de la Sota built wooden platforms raising above the ground, which would be expanded in 1998. In 2001 it was commissioned a project for the underground level of the Arquería, developed by Jesús Aparicio and Héctor Fernández Elorza. 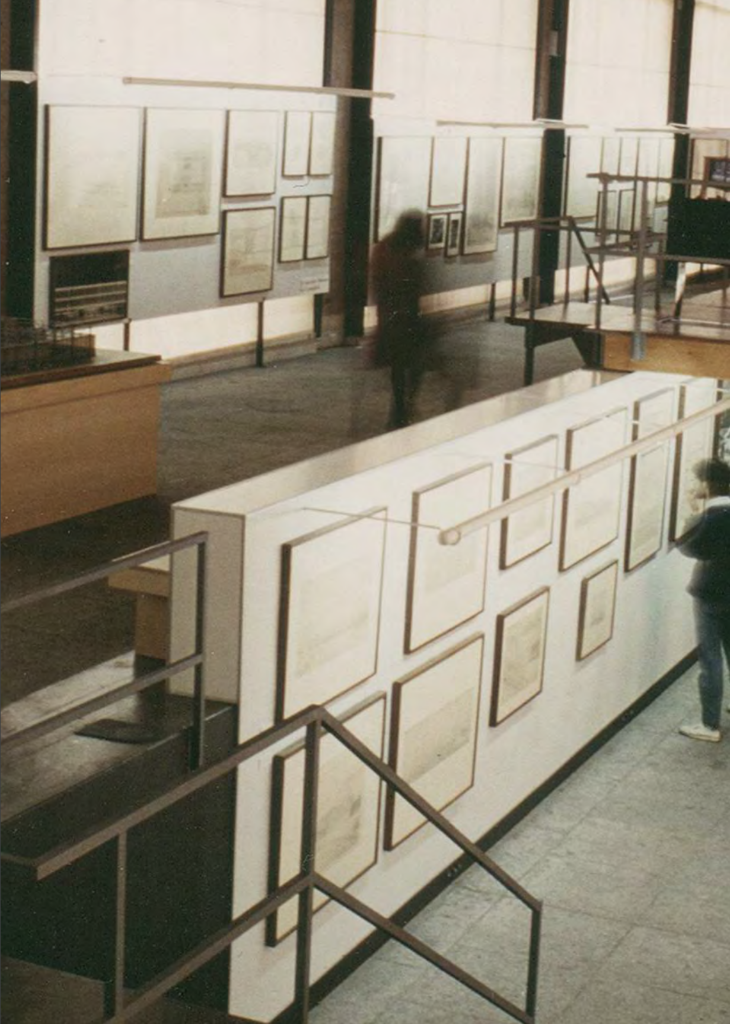 Exhibition ‘Mies van der Rohe. Its architecture and its disciples’, designed by Alejandro de la Sota in 1987. Image obtained from the research carried out by Elena Utrilla.

Currently, the connection between the street and the garden through the Archery has been largely lost.

As an answer to the competition promoted by ENAIRE Foundation to convert the exhibition space into an Art Center which will house its collection, the proposal by AGi architects seeks to recover ​​the Arqueria as the filter and connector that Secundino Zuazo thought of in the 1930s. 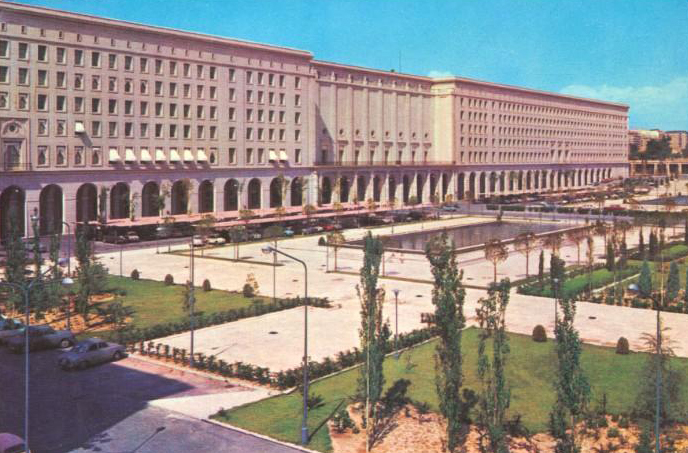 Our proposal seeks formal clarity, volumetric cleanliness and visual transparency. The first proposed action is, therefore, to eliminate the divergent elements that have been introduced successively, liberating the space. The project also involves moving from a spatial complexity with numerous floor levels, to a distribution in only three floors, which generates simplicity. Every new element introduced maintains its distinction with what already exists, by being separate from the wall.

Proposal: Longitudinal section, first floor, details and views of the relation of the new slabs with the existing container.

The second action proposed to be carried out is the recovery of the transparency through the return to glass paraments, with solar control, in each arch. A transparency that extends from the visual to the programmatic, with the proposal made to incorporate the garden as an outdoor exhibition hall.

Seeking to make Nuevos Ministerios Art Center recognizable —and therefore closer to the public— the proposal becomes distinguishable through an entrance marked by a steel plate that covers the access area, and works as a guide. 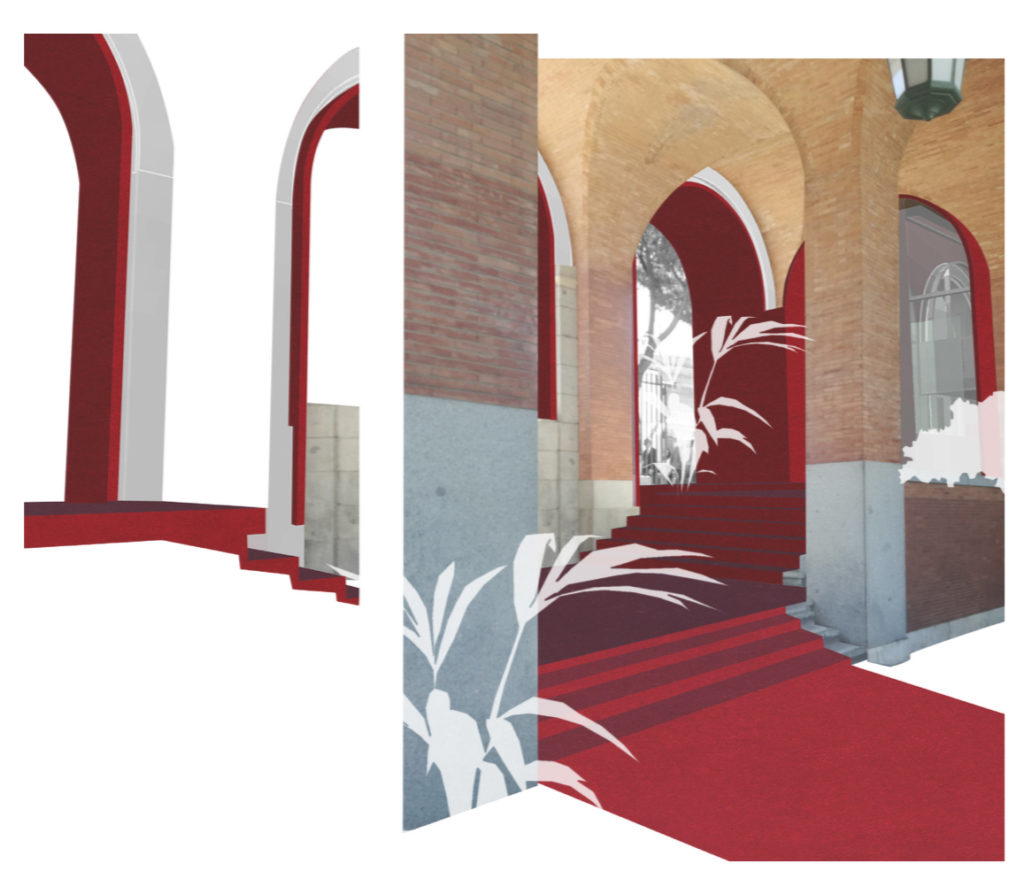 The access is unified, and the communications are organized in two indoor nucleus of vertical communications closed in glass that introduce natural light in the interior. 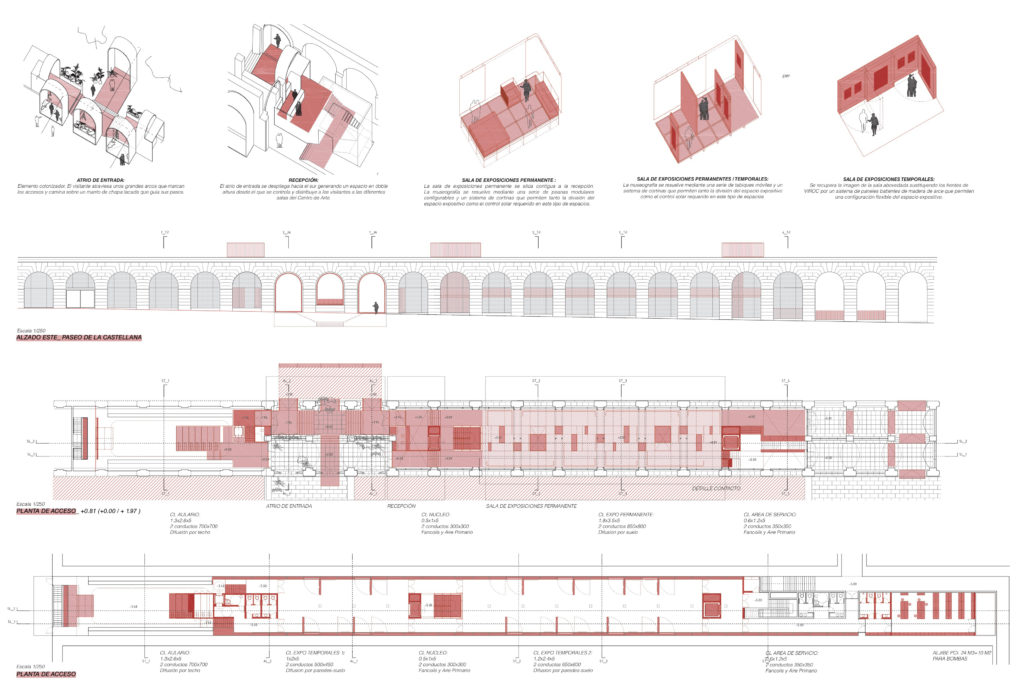 From a museographic point of view, a specific solution is proposed by level. In the lower one, at the basement, the old image of the vaulted room is recovered replacing the VIROC fronts with a system of maple wood swing panels that allow a flexible configuration of the exhibition space. 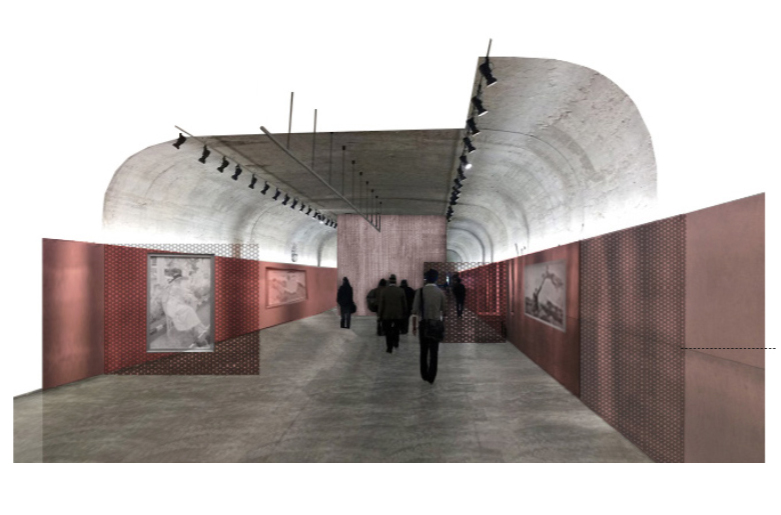 The permanent exhibition hall is adjacent to the reception. The museography is solved by means of a series of configurable modular pedestals and a system of curtains that allow both the division of the exhibition space and the solar control required in this type of space. 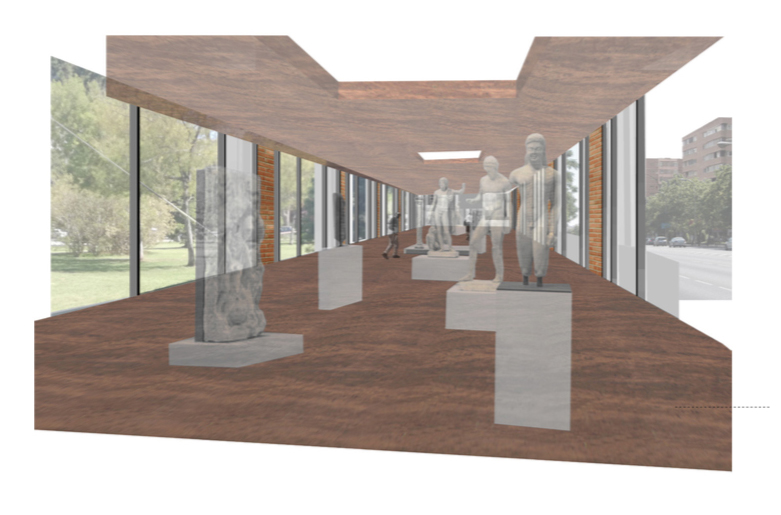 On the first floor, the museography is solved by a series of mobile partitions and a system of curtains. 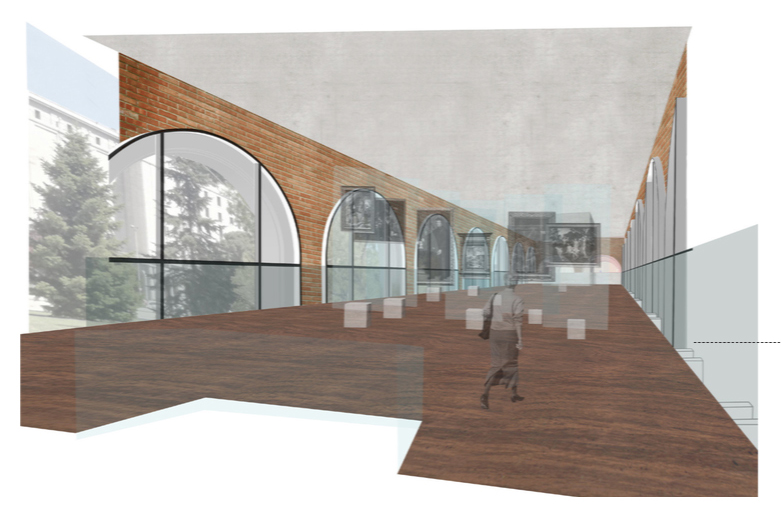 The proposal, which insists on functionality, identity and spatial clarity, has received the second prize in the competition of the Nuevos Ministerios Art Center promoted by the ENAIRE Foundation.