The courtyard house is a type of dwelling in which the rooms are organized around a central private courtyard. The courtyard is an architectural form with its own rules that has generated multiple variations over time. The 20th century, with its high buildings and urban expansion, has perhaps distanced us from this unique space.

Despite this, the courtyard continues to inspire us today. Many contemporary homes, as is the case with our projects Three Gardens House and Wall House, are patio houses. The courtyard provides security and intimacy, has an excellent climactic performance, allows for activities outside without leaving the house and gives a sense of community to the domestic space.

The courtyard house in the Mediterranean and Middle East region 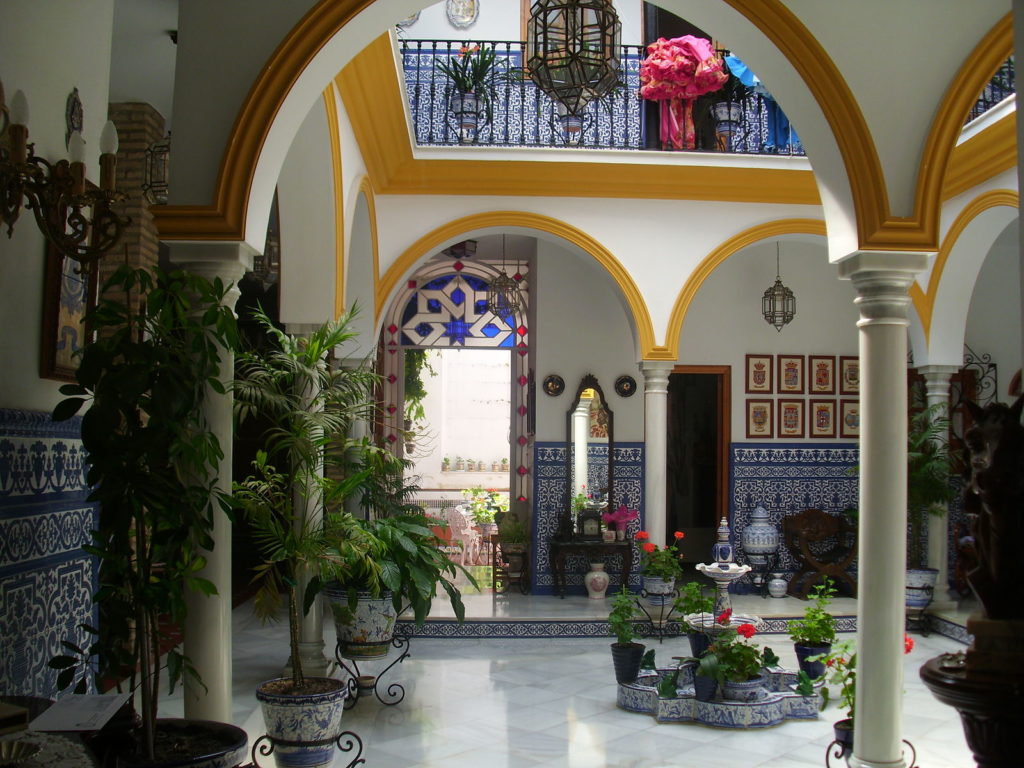 For those of us who live in the region spanning from the Iberian Peninsula to the Persian Gulf, tracing the origin of our courtyard houses goes back to Antiquity. The courtyard house was already fully developed in the town of Ur, the ancient city located near the mouth of the Euphrates River, around 2000 BC. The typical houses of the Mesopotamian civilisation were organised around a courtyard and were either rectangular or circular in shape.

In the Arab world, the courtyard –hosh— has been the heart of the house for centuries. Fruit trees, shade trees and flowers are grown there. A water element is always desired, and can be accompanied by a covered outdoor sitting area. The Arabic courtyard house allows protection from a hostile climate, provides privacy as well as an outdoor space and evokes the lifestyle of a Muslim family. The result is a house hidden in the urban fabric. The house is not perceived as an object to be seen, but experienced through the succession of spaces, designed from the inside. 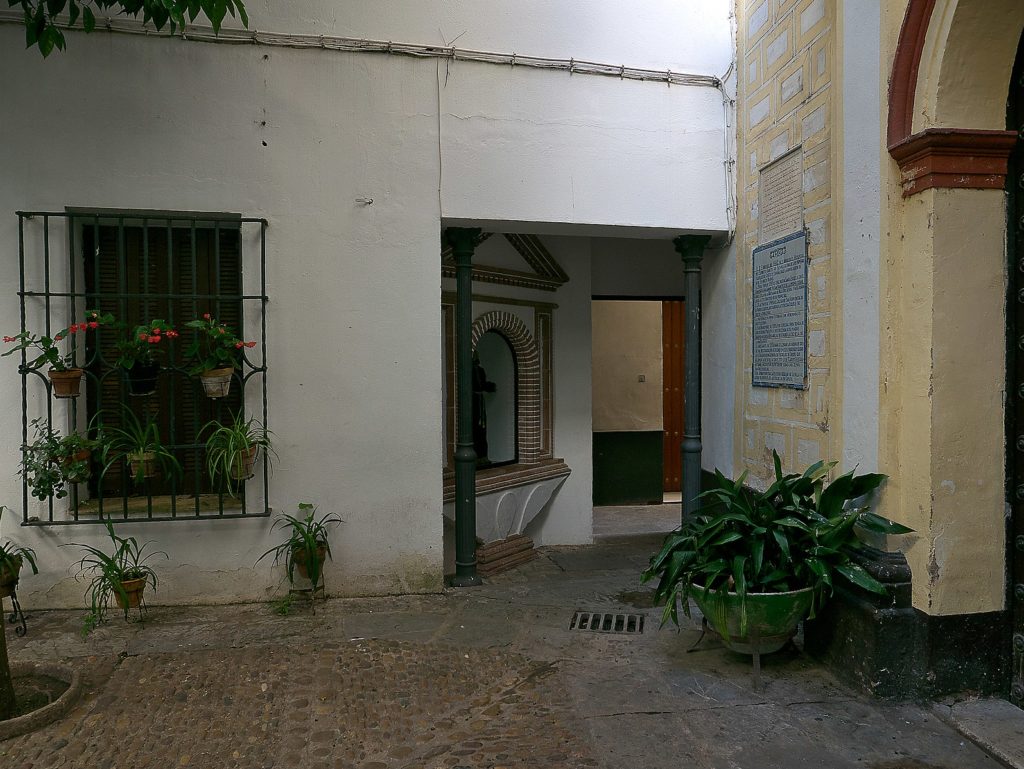 In the Iberian Peninsula, the Muslim tradition of the courtyard, which was embodied in Andalusí architecture, has survived to this day in the well-known Andalusian patio. In Seville, traditional houses fill the old town. Their flat façades are plastered in white, with barred windows –called cierros– on the ground floor and balconies on the first floor. There is also a large door, which is almost always open, leading to the entrance hall. The courtyard is decorated with plants, there are many of them and they are placed on the floor and walls. This environment evokes the idyllic garden. In the house, the rooms have no pre-defined functions, and many of them only have light through the door.

There have been many kinds of courtyard houses developed in these geographies. The architectural academy was influenced by them, and thus was a source of inspiration for Renaissance architects. More recently, Le Corbusier was also inspired by them. Ville Savoye had a courtyard raised above the pilotis. Even more surprising was the use of the courtyard proposed by the Swiss architect in the Immeubles-Villas. In this project, each of the housing units was designed as a two-storey courtyard house. Stacked together to form a building, the courtyard house became a vertical community. This increased housing density while maintaining the possibility of private outdoor space. The courtyard house was imagined for the modern city.

The courtyard house in Ghana 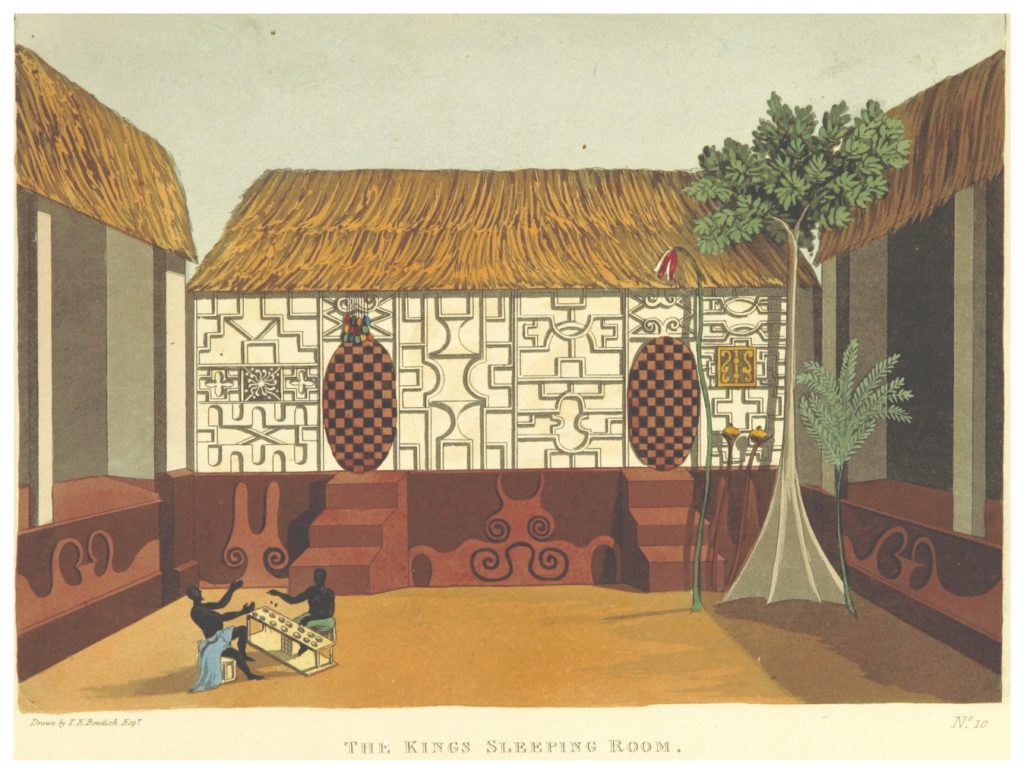 Different types of courtyard houses are found throughout much of the African continent. The Arab tradition also travelled across Africa with Islam to the south and west of the continent. With a rectilinear floor plan, flat roof and often two or more storeys high, these houses were built from sun-dried mud bricks or from mud and stone.

Many African cultures built their dwellings with adobe and mixed materials that were easily accessible on site. They were cheap, and also had excellent climatic performance in hot climates. In Ghana and Ivory Coast the Akan people erected their buildings out of them. Even more characteristic is the organization of buildings around a courtyard and their profuse decoration.

Oral tradition tells that the Akan people, formed by many different subgroups, migrated from the Sahara and the Sahel to West Africa around the 11th century. Descendants of this culture live now also in America, since it is estimated that 10% of the slave ships that left from the Gold Coast carried members of the Akan people.

Among the different Akan groups, Fihankra-type houses were the most common. A Fihankra consists of four one-room buildings, with a veranda, forming a square between them. The four buildings generated a central courtyard. Traditionally they were built with interwoven reeds covered with mud or with clay bricks. The roofs were made of straw, corrugated iron or sewn leaves. Ntwuma, a red ochre coloured clay is still used as plaster. The walls were decorated with painted symbols and reliefs. 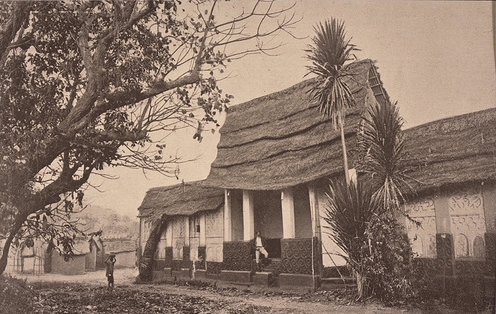 The Ashanti people are one of the Akan groups that built this type of housing. This culture constituted an empire from the end of the 18th century until the 20th century, and is known for having fought intensely against the European colonialists. Between 1826 and 1896, they fought four wars against the British Empire, namely the Anglo-Ashanti Wars.

The decoration of their houses is one of the special cultural features that distinguish these people, who make extensive use of non-verbal communication in their material culture. The reliefs of their buildings generally express proverbial sayings that reflect the moral values of their society. Today, most of Ashanti’s traditional architecture has disappeared. When these buildings were finally declared National Monuments of Ghana in the 1960s, only sixteen of them remained standing.

Contemporary African architecture also reflects the importance of the courtyard today. This is why the Niger-born architect Mariam Kamara, in her project Niamey 2000, was inspired by the region’s pre-colonial cities, such as Timbuktu in Mali, Kano in Nigeria, or Zinder in Niger, which were once dense urban centres. From these references, she proposed a collective housing that maintains the feeling of interlaced and dense dwellings —like those of these old urban centres. At the same time, the project preserves a sense of privacy and intimacy by being linked to a courtyard.

The courtyard house in Beijing 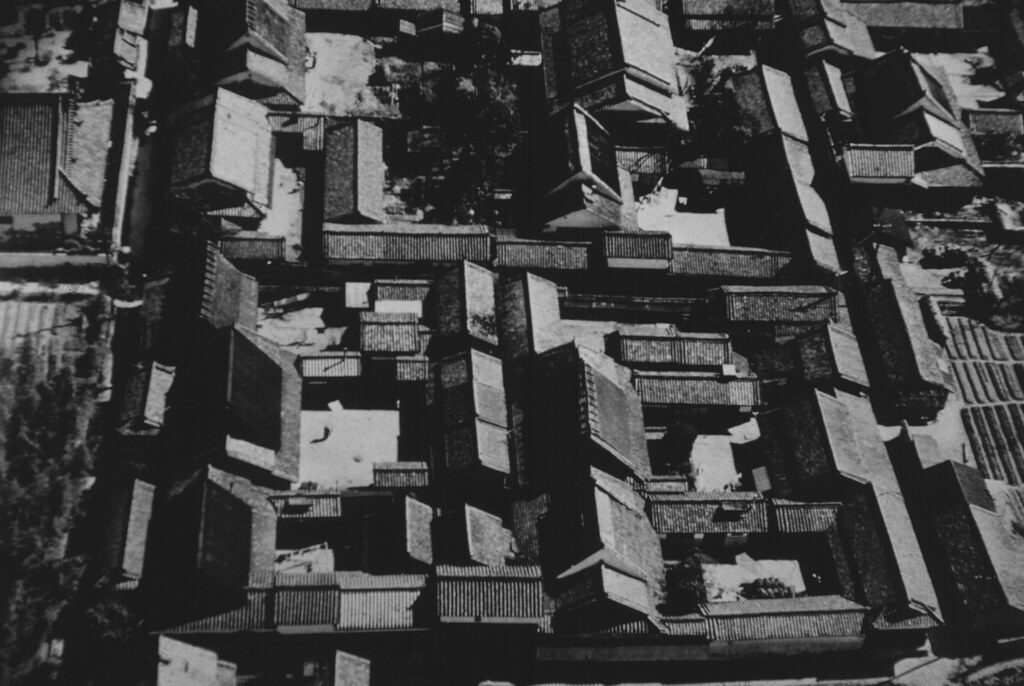 Throughout China a particular form of courtyard house has a long tradition. In Beijing and in rural Shanxi, the local courtyard is called siheyuan, and it goes back 2000 years. A siheyuan is a type of spatial organization used in palaces, temples, monasteries or offices, and is the traditional form of house in the city. It consists of a rectangular, N-S oriented courtyard surrounded by buildings on all four sides. Until 1949, Beijing was a city completely made up of this type of residence. In the following decades, the traditional quarters of the city would begin to be threatened. In the 1990s, a total of 4.2 square kilometres were demolished. In 2005, another 14 square kilometres disappeared, leaving only three square kilometres occupied by this traditional typology. Today, this type of housing is undergoing a process of gentrification that makes it inaccessible to a large part of the population.

The siheyuan is made up of several buildings arranged on the sides of one or more courtyards, forming a small, medium or palace-like siheyuan. In a small siheyuan with a single courtyard, the south-facing building was traditionally the main house. The main house was connected by decorated paths to the side houses, which faced east and west. The building facing north was called the front house, behind which there was usually a separate rear building. 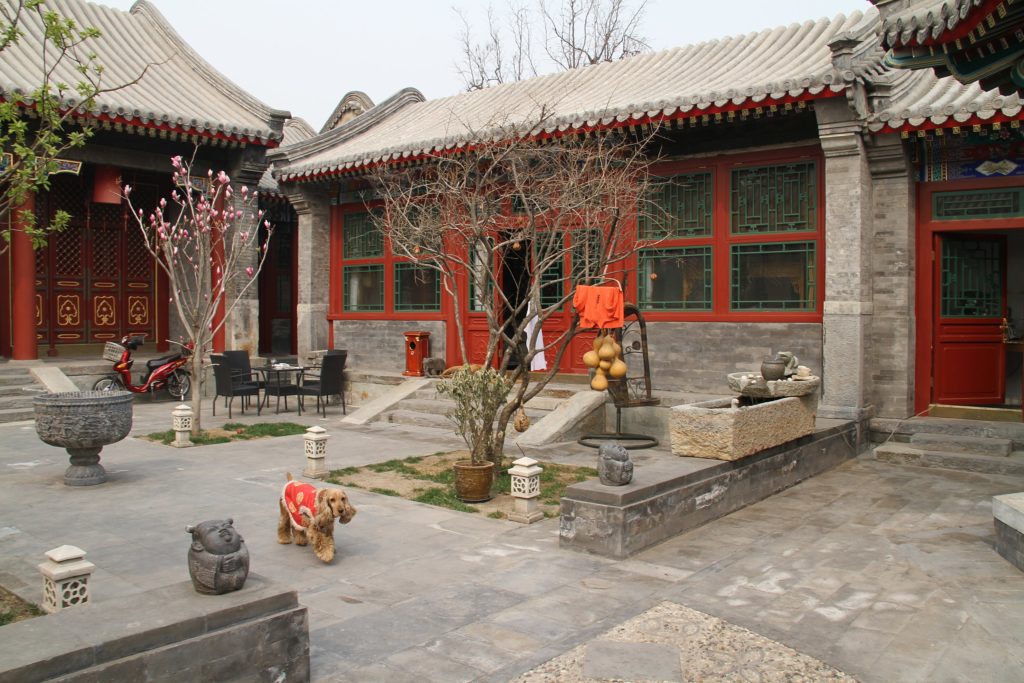 The siheyuan layout represented traditional Chinese morality. Each of the buildings, because of its orientation, receives different amounts of sunlight. The main building in the north and facing south, has the best disposition, serving as a living room and bedroom for the head of the family. The buildings on the east and west sides receive less sunlight and serve as bedrooms for less important family members. The building on the south side facing north receives the least amount of sunlight, and usually serves as a study, reception room or servant’s quarters. The central room of each house is used as a living room. The room in the main house is used for the whole family to meet for dinner.

The main door of the house opens in the southeast corner, which corresponds to the position of xun in the Eight Taoist Diagrams, and which means “wind”. Normally, there is a screen wall behind the door, to provide privacy; protecting the house from evil spirits. The northwestern walls are usually higher than the other walls to protect the interior of the buildings from strong winds. The eaves curve downwards, so that rainwater flows along the curve to fall. Often a pair of stone lions are placed outside the door. In the courtyard, a very decorated door may be placed.

Generally, the windows and doors of a siheyuan open to the courtyard, providing complete privacy for the family. Most of the time, there are trees such as the crab apple, pomegranate or lilac planted in the patio, along with rockeries and goldfish bowls. The courtyard is a garden and an outdoor living room. It is, again, in this case, a domestic paradise.