Sana,  a new system of educational architecture, in Kuwait

Sana is a sustainable school movement proposed by AGi architects. It is a school system focused in architecture that fosters creativity, exploration, play and a desire to learn, and encourages friendship among students and cooperation with teachers. It considers natural light and air, renewable energies, the tactile, landscape, structure and colour as fundamental elements for a new educational proposal. 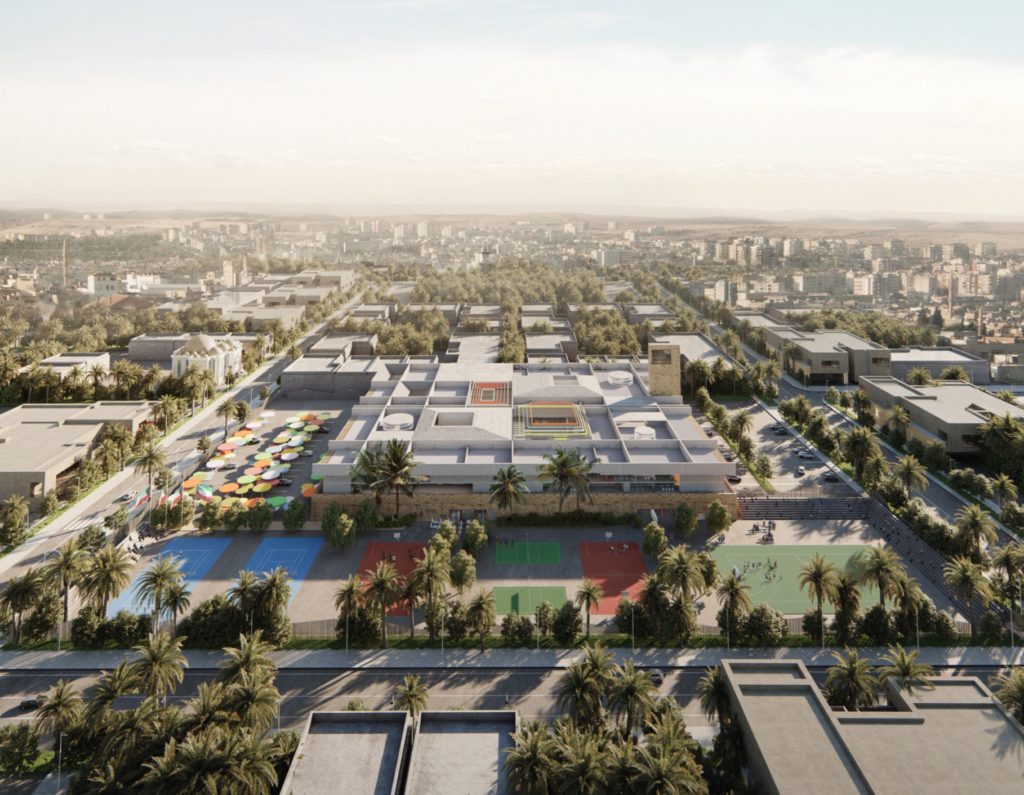 These projects attempt to use design as a tool to transform education and foster learning.

Sana is a flexible system for educational architecture that can meet the needs of each particular context. AGi architects recently applied it to the design of four schools for different age groups in Kuwait.

To begin with, the introduction in the buildings of natural light and air, of renewable energy and landscaping, shaped the four schools. In search of a high sustainability, passive design techniques were applied to the buildings. The layout of the roof, a structural grid of concrete beams, ensured that natural light was diffused. The beams created shade inside. Vegetation and green spaces were maximised. Some areas were gently sunk or raised to improve air movement through the schools. In addition, the roof incorporated photovoltaic cells. 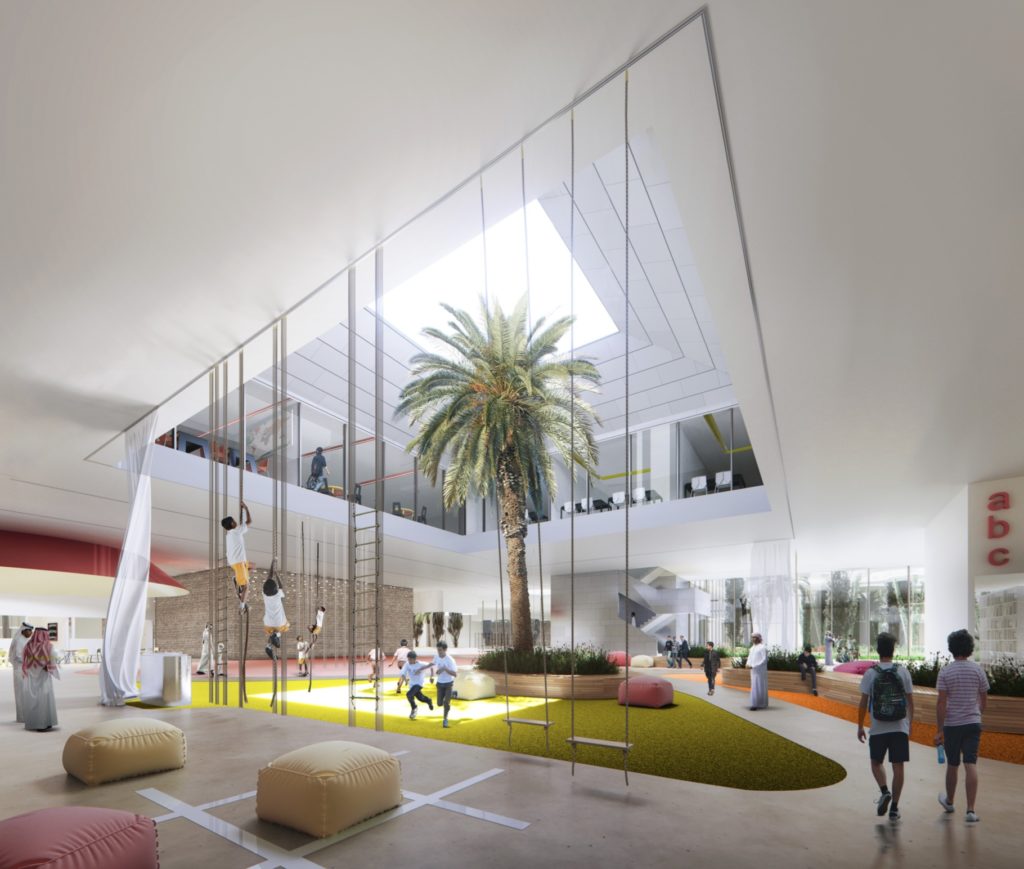 Secondly, the spatial structure of the buildings was designed to enhance emotional qualities. It is proven that learning only takes place when there is a sense of security. For this reason, a perimeter wall surrounding each school was proposed. This led to the opening of courtyards in the interior, where children’s play and safe learning could emerge. In the case of the institute, the students’ sense of security was combined with spaces that favoured their independence. For the kindergarten, consideration was given to creating a cosmos suitable for children. Therefore, places such as the auditorium were designed with the appropriate size for children. 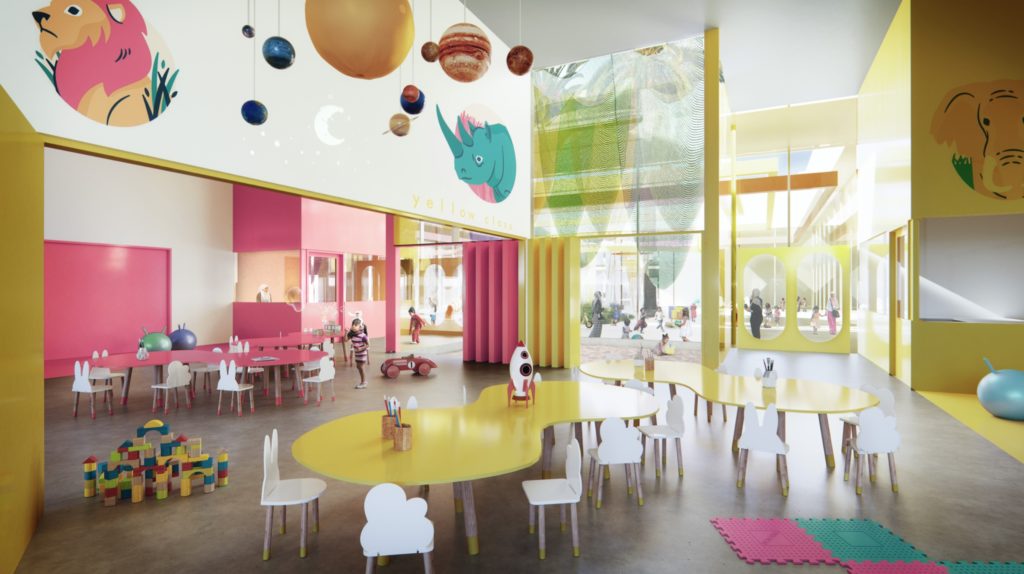 Finally, the layout of each school was organized according to the rhythm and tasks of the students. Thus, the buildings depicted the spatial sequence that corresponded to students’ daily routine.

Located next to the Vena River Linear Park, which connects the Villímar neighbourhood with the city centre, this proposal also promoted the relationship between the educational space and the environment. The project for a new school valued the existing conditions of the site. It created the large playground facing south to maximise sun exposure. The roof was configured as a large sloped plane that continued the river’s green area. 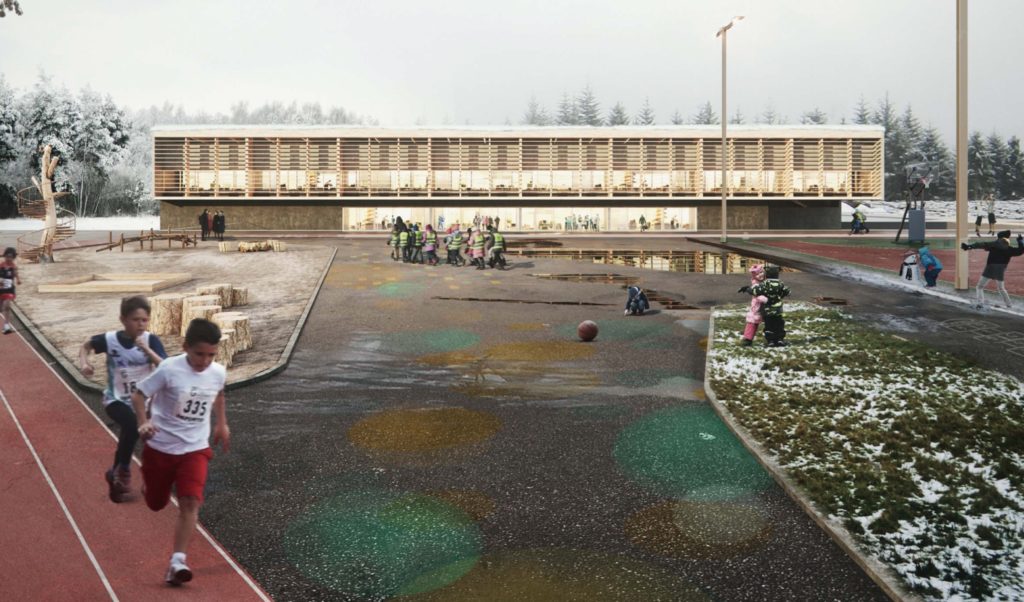 The design of the educational spaces also sought to make different types of learning experiences possible. Thus, to the main atrium, a common space to meet, was added a more cosy, terraced area for quieter encounters. The canteen, which could be used flexibly, opened up to the atrium. Around it, the library and a cave-like space were also set up to concentrate and study. 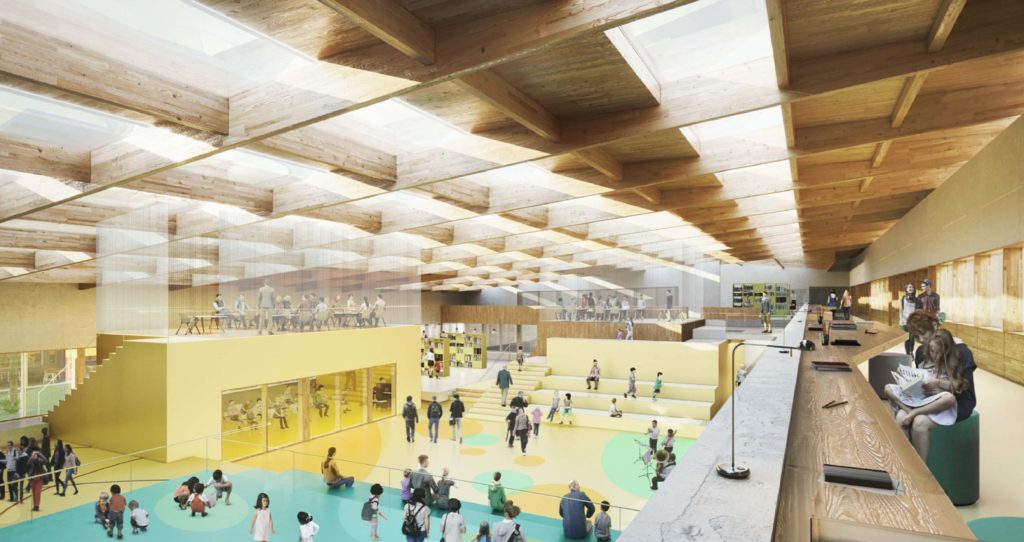 As a sustainable construction system, we chose Massive Wood laminated timber, assembled with a dry joint and combined with very thick thermal insulation. This option considerably reduced the levels of CO2 consumed in its manufacture while allowing its reuse and subsequent recycling. 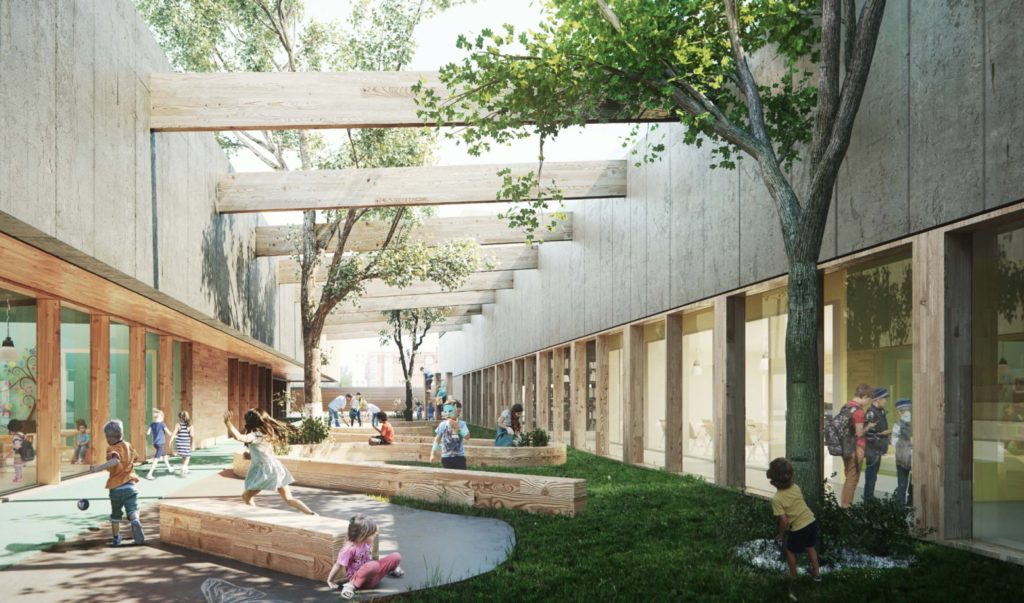 As a result, this educational architecture project had not only spaces that favoured sharing, but its materiality was warm and pleasant, supporting these exchanges in a sensory way. The relationship between the meeting spaces, and the exterior, shaped a project thought from the experience of children.

We believe that architecture is fundamental to the educational context. It can convey values and create sensations that lead to a better environment for individual and collective development and experimentation.

This design for the new Los Bates school responded to its natural, truly unique context. The relationship between the building and the exterior was one of the most important objectives of the design. Lakes, beech forests, oak, birch, lime and poplar trees characterized the area, east of Prague, where this school was planned.

The proposal presented straight lines and clean volumes. On the north façade, the volumetry had a larger scale, of a collective character. It was progressively dissolved into smaller volumes, in order to acquire the scale of the surrounding houses. In addition, the building integrated the context into its interior through courtyards in which the growth of trees was favoured. 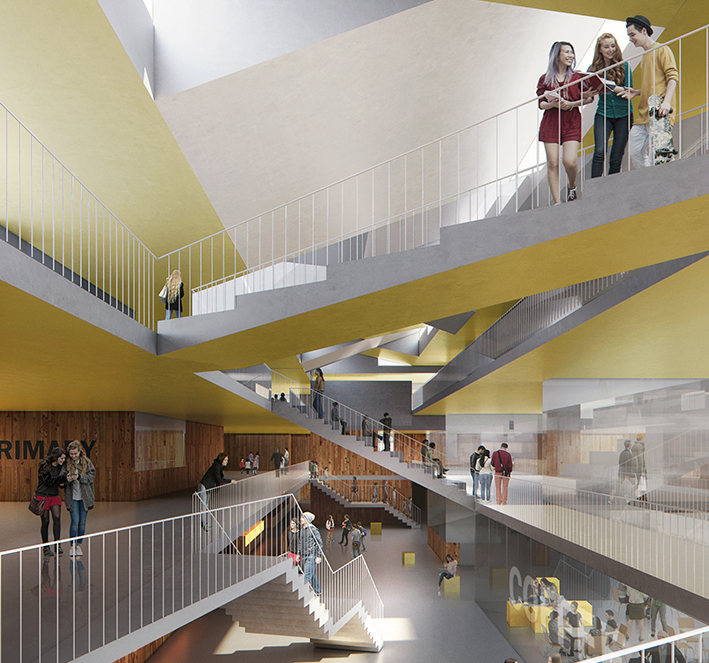 At the same time, the interior spaces were designed to foster diverse ways to share knowledge. The access, called the Wood Gate, configured a large atrium, which was a meeting place for the entire educational community. Its opposite was the Mountain: the exterior terraced area that blended into the landscape. The classrooms were flexible and combinable, and related to an adjacent space for informal exchanges between students and between students and teachers.

In addition, two other singular spaces were proposed. The Plaza, a space furnished in a flexible way, allowed group work. The Cave, on the other hand, was a geometrically surprising and welcoming space whose purpose was to favour reflection and concentration. 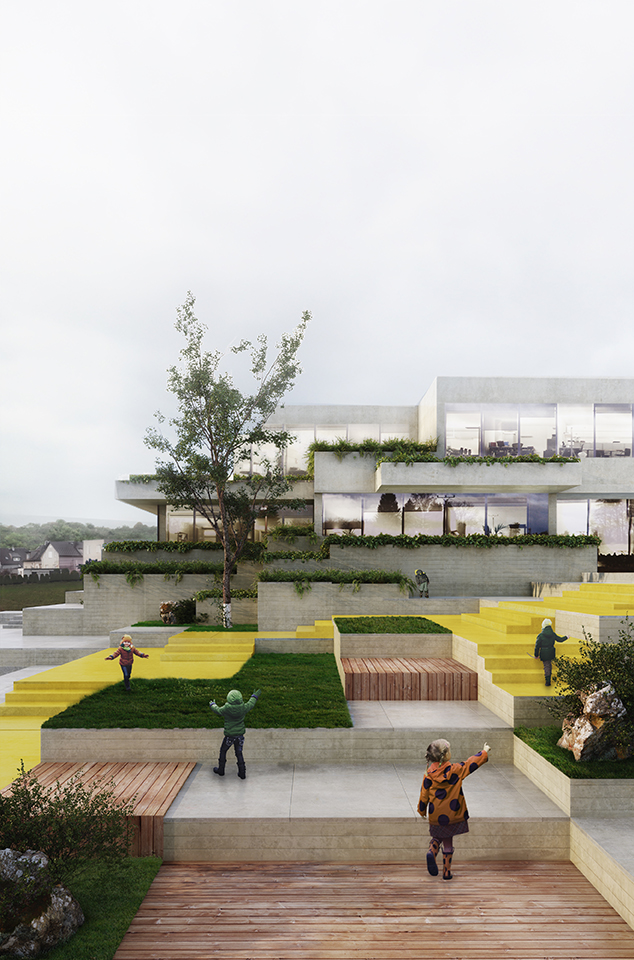