This article introduces two readings, a book of interviews to Gordon Matta-Clark published by Puente Editores, and the catalogue of the exhibition Hyperspaces, at Bombas Gens art centre.

In his interviews, Gordon Matta-Clark insisted on his interest in exploring boundaries. In occupying the architectural limits. But Matta-Clark also placed himself on other frontiers: the one between artistic and architectural practice, between concrete space and abstraction, between creation and destruction, and indeed, we dare say, between formalism and political meaning.

Every limit also raises the question of its validity: is there or is there not a boundary between art and architecture, between creation and destruction? The answer is simultaneously yes and no. The two books that we discuss in this text are situated on several of these limits. They deal with the presence of the body in space, and vice versa, of space in the body.

Gordon Matta-Clark. Entrevistas is published in Puente Editores. It is a small volume, magnificently designed, which contains six interviews with the artist in Spanish. Thanks to these interviews, we once again take a look at a work that has significantly influenced the academic architectural field. However, as we read in the book, Matta-Clark felt ideologically distanced from it. His great reflections on the political meaning of architectural practice serve to accompany us nowadays. Architecture has lost its heroic sense but remains heir to the modern premises.

Only if you are able to escape the traditional conception of what is useful or necessary, then, and only then, you can begin to explore the topics. If, for example, you unquestionably accept the idea that things can be asserted in a strict way, that the human condition can be established and formulated, you can unquestionably also assume that things can be resolved. This is one of the attitudes that the politics of architecture intentionally promulgates, the one inherent in the tradition of the machine.

Matta-Clark was the son of Chilean painter Roberto Matta and American painter Anne Clark, who had emigrated from Paris to New York due to the Second World War. Their son would travel back to France in 1962 to study French literature at the Sorbonne. There he met the deconstructivist philosophers, Guy Debord and the Situationists. The following year he returned to New York and studied architecture at Cornell, which was then led by the modernist historian Colin Rowe. It was in the 1970s that Matta-Clark’s artistic practice fully emerged.

I don’t know what kind of keys you have, but there are people who carry these incredible keychains, almost like address books, a bunch of different keys for different locks in different spaces. It’s a great thing. If you could get that key ring, you would have dozens of spaces in your hand, and you wouldn’t know what they look like or where any of them are. It’s another example of my interest in inaccessible and imagined space.

As reflected in Entrevistas, Matta-Clark’s work focuses on undoing, on destruction as an act of creativity and sensible transformation. It is clear that the artist’s interventions are aggressive. However, if we look more carefully, we can read them as poetic acts placed in much more violent processes of architectural construction and destruction. Perhaps not as an objective, but as a consequence of his work, Matta-Clark makes visible the fragility of built environments, and so of everyday life in the city. His interventions propose a phenomenological and formal subversion of space. They place the body at the centre. And at the same time, in an unintended consequence, they question speculative urban processes.

Matta-Clark’s work is intimately related to his time’ s city. The urban fabric was going through processes of exodus, precariousness and social inequality with the marks of race and social class. One of his best known works, Splitting (1974), consisted in cutting in two a prefabricated house located in a black ghetto. In Conical Intersect (1975), he drilled a 17th century Parisian building which was awaiting demolition to leave space for the construction of the Pompidou Museum.

Entrevistas allow us to delve into the interests underlying the work of Matta-Clark. He was a key artist who worked outside the museum space, in the specific context of the city of his time. In contrast to the New York artist’s contribution, the other book in this article presents a very different approach to architecture.  In this case, it is a glimpse from the exhibition space. 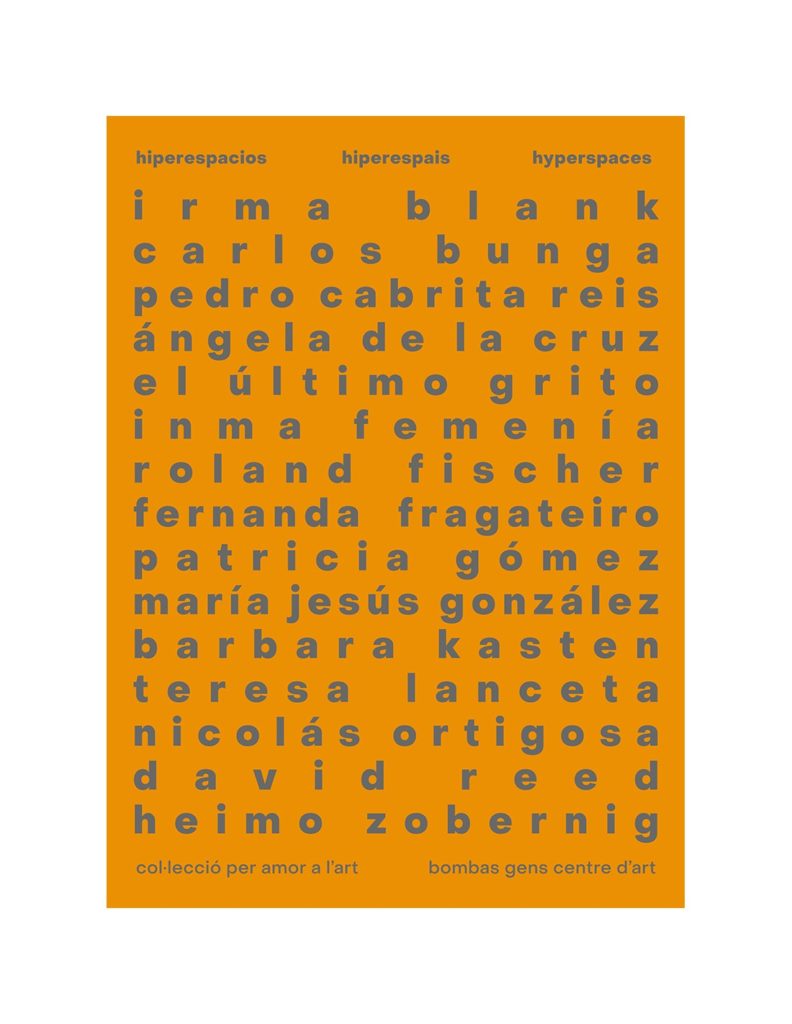 Hyperspaces is the catalogue of the exhibition of the same name that takes place at Bombas Gens until May 2021. The exhibition shows works from the collection Per amor a l’art, mostly paintings. Architecture is present in different ways. The glass and steel skyscraper façades are converted into geometric patterns in Roland Fischer‘s graphic work Façades On Paper (2001-2012). The industrial standard is a protagonist in Pedro Cabrita Reis‘s work Les Verts #2 (2012), a green canvas enclosed among aluminum frames.

As a superficial extension of the skin, the realm of the haptic implies a reciprocal contact between us and the world, which “art architecture” embodies. This ‘touching’ of materials such as spatial forms, figures and shadows implies a dynamic form of resonance.

Memory and conservation are discussed in the exhibition through the work of Patricia Gómez and María Jesús González Room Rosa (Calle Mediterráneo 29, El Cabanyal). In memory of the place (2007-08). This piece documents the interior space of a house in the art nouveau neighbourhood of El Cabanyal, threatened by demolition. This connects us again with Matta-Clark. The Valencian artists have approached an urban context that is being evicted. However, Patricia Gómez and María Jesús González’s strategy is conservation. The artistic technique consists of transferring the interior architectural finishes (walls, ceilings, floor) to a canvas. Thus, an archive is started that preserves a part of these dwellings for the future.

The exhibition catalogue was designed by the artist Fernanda Fragateiro, and is based precisely on the idea of archiving images. The Portuguese artist proposes a book structured as a visual tour. In it, photographs of the artworks in the exhibition form a collection that can be walked through as if it were a landscape.

The book pages are visually connected through the color and texture of the artworks’ photos on them. Interspersed between these images are pictures of ordinary architecture. In addition, colored half-pages interlink the former to give continuity or to generate contrast between them.

Anyone who likes architecture will immediately recognize these black and white photographs of ordinary architecture. Many of them come from Architecture Without Architects, the famous exhibition held at the MoMA in 1965. Others come from other sources, such as the image of the famous semi-collapsed facade designed by the architecture studio SITE, which is in dialogue with one of the sculptures by Fragateiro herself in the exhibition. Both in the catalogue and in the exhibition, architecture is largely presented as an image. But we can also find a material connection, which appears when we understand what things are made of, since painting is also part of the built space.

The feeling remains, however, that the dialogue between the exhibition space and architecture is somewhat impossible. Matta-Clark already recognized the impossibility of transferring his interventions to the museum space. At the same time, however, the exhibition offers us a different temporality from which to look at the world. This is a more in-depth look, to a certain extent outside the financial and material processes that create space in the city. And this is good news for architecture.

Gordon Matta-Clarks quotes have been translated from Spanish to English by the writer of this article.