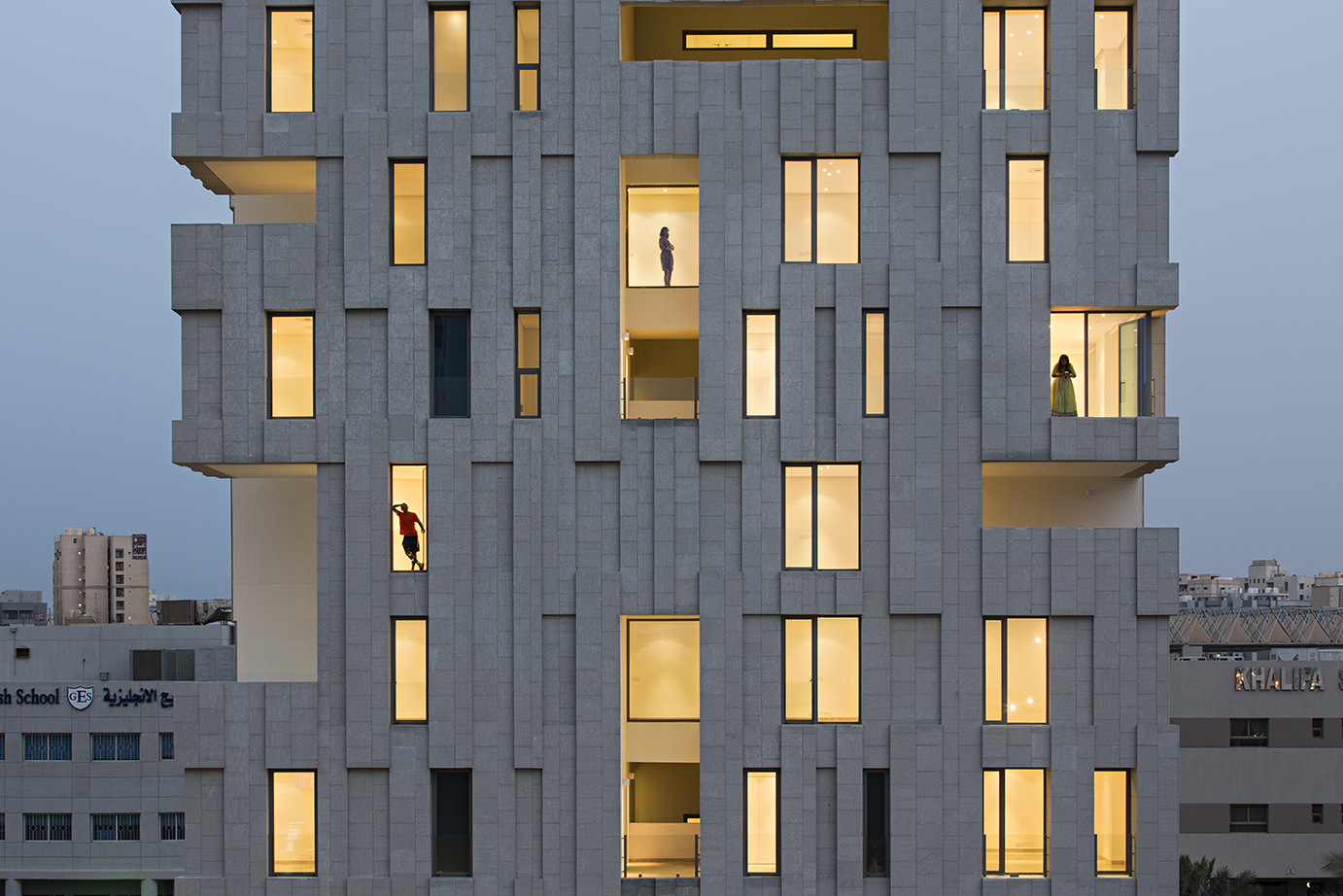 Wafra Wind Tower introduces a new concept to urban living that adapts to the evolving lifestyle of 21st Century contemporary Kuwait. Considering the increasing demand for land in the city, the transformation of single family dwelling typologies becomes a must, where tenants should be able to enjoy privacy as well as benefit from vertical solution amenities and prime location. Understanding and reinterpreting local environmental techniques is one of the main targets of this design. The services core of the building is thus located on the southern wing, in order to minimize sun exposure and consequently reduce energy consumption – acting as a thermal barrier to the rest of the building. Hence, minimum openings are placed on the aforementioned façade, while on the other hand the building opens to the North, facing the sea and enjoying its privileged views. Optimal opportunities for natural lighting and cross ventilation also become an essential driving force for the design, which give the tower its character and determine its final orientation. Taking the idea of the traditional middle-eastern courtyard typology and developing it volumetrically, the initial concept flourishes in the form of the tower. The courtyard is no longer constrained to the core of the building; instead, it borrows light and ventilation from the facade, funnels it through the pool area and flows through all levels finding its way out through the opposite façade. Granite stone is chosen for the façade, in order to give the tower an aspect of a monolithic sculpture that is carved by the wind, in contrast with the smooth surfaces of the interior courtyard that are rendered in white plaster. Functionally and geometrically, the tower is raised on a plinth that comprises 2 levels, where public spaces – including swimming pool and gym area – are located. The apartments rise up organically and allow for light and ventilation to penetrate through. Full tower height is 13 levels, where 12 duplex apartments are piled in order to preserve privacy. An extra penthouse crowns the building, including rooftop gardens and terraces that are advantageously profited. 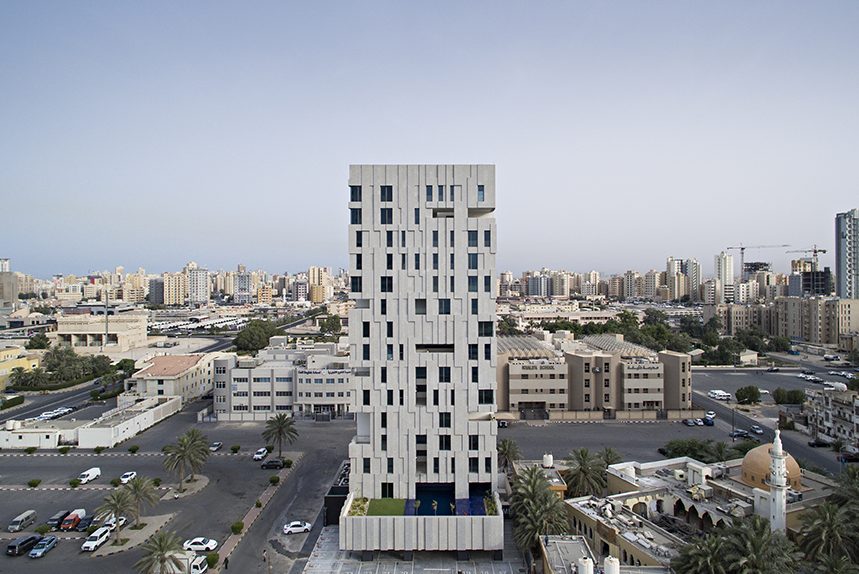 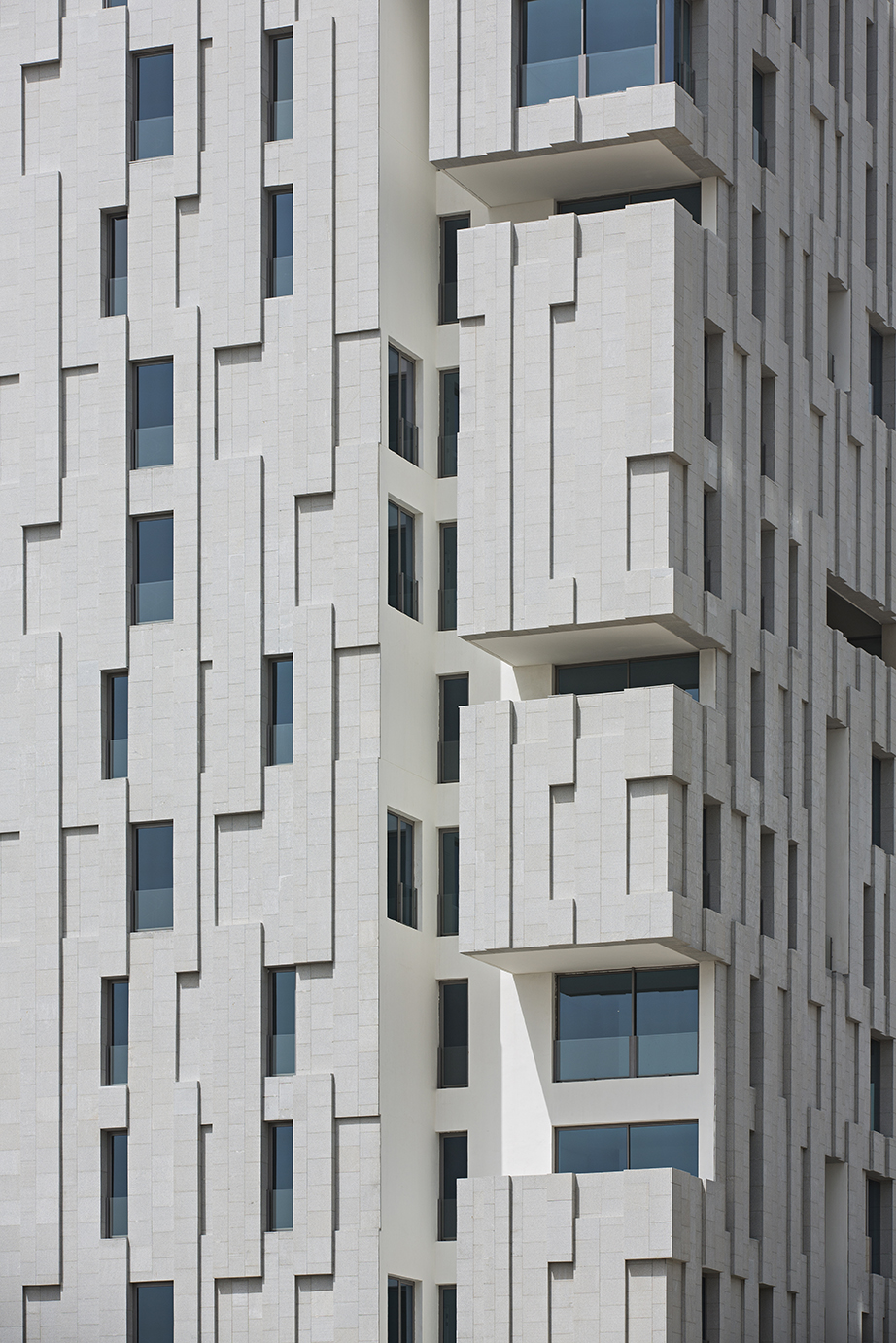 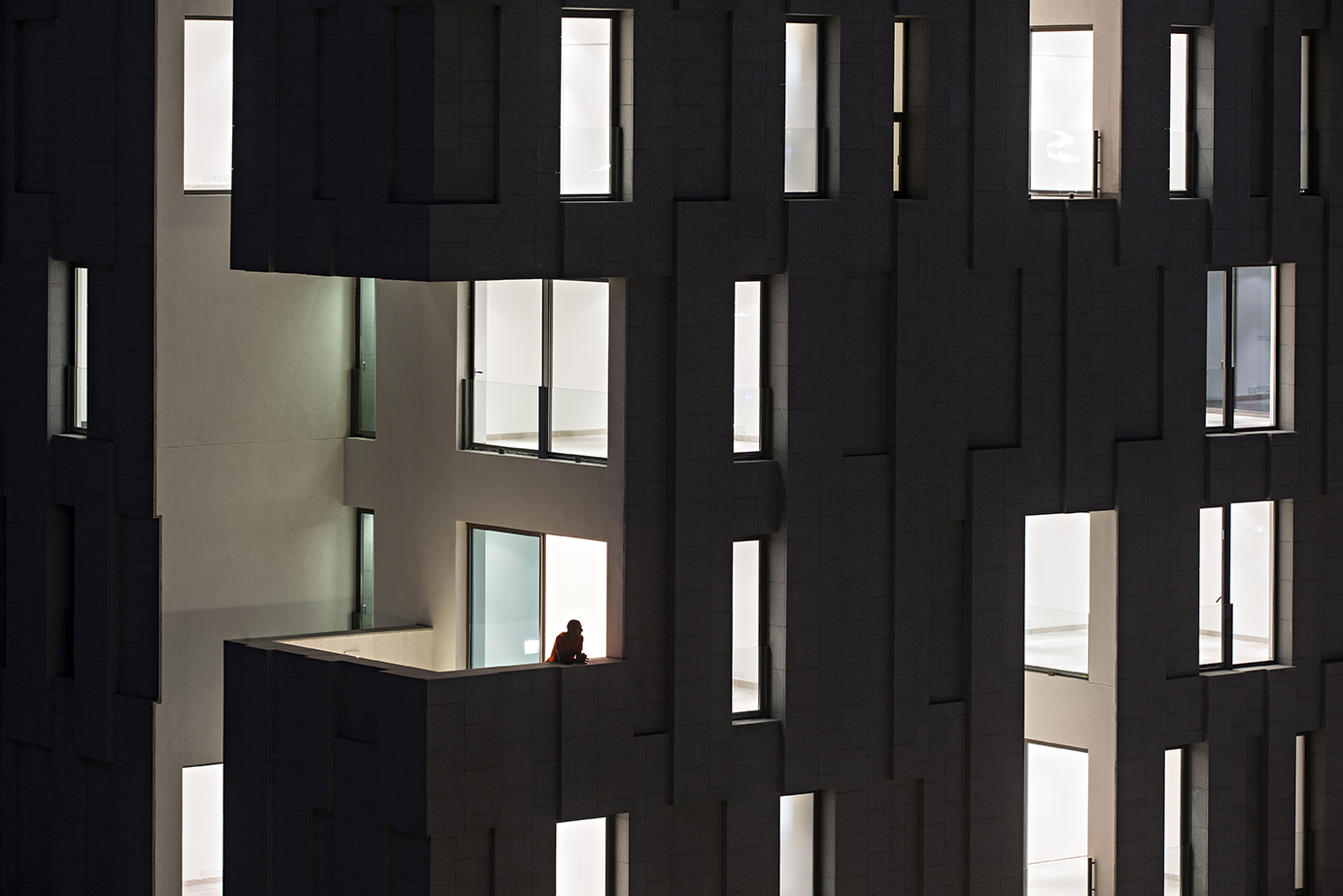 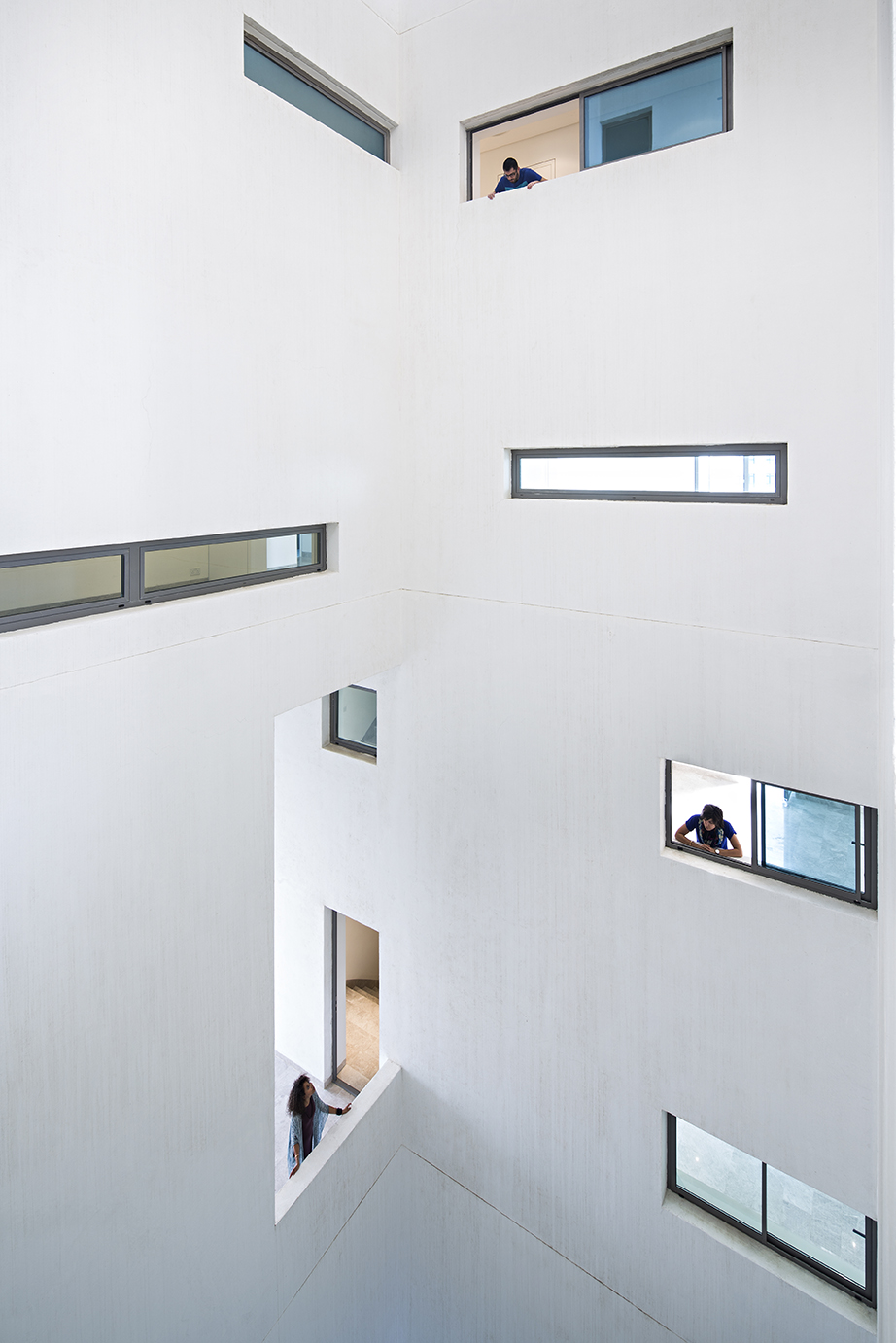 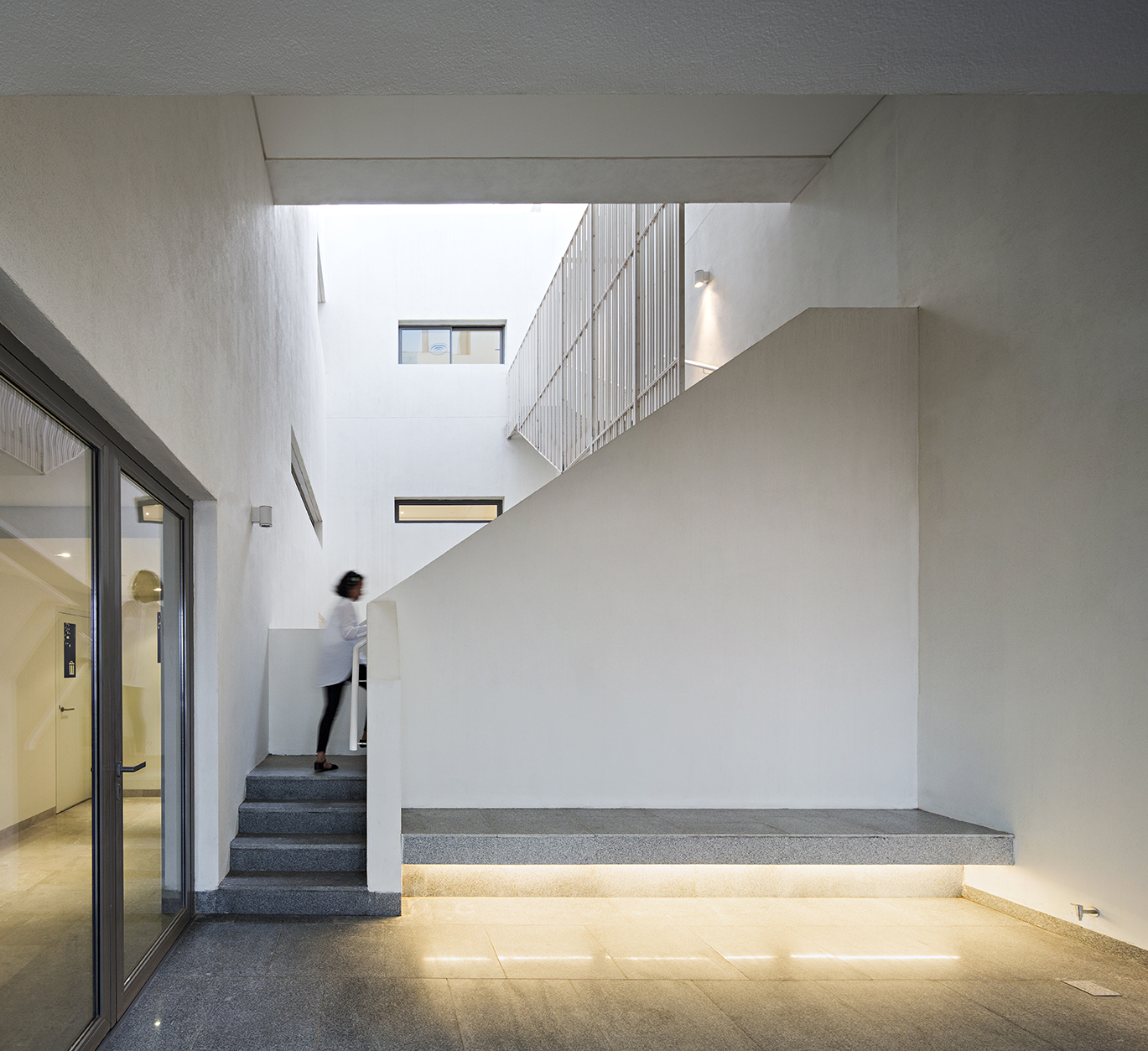 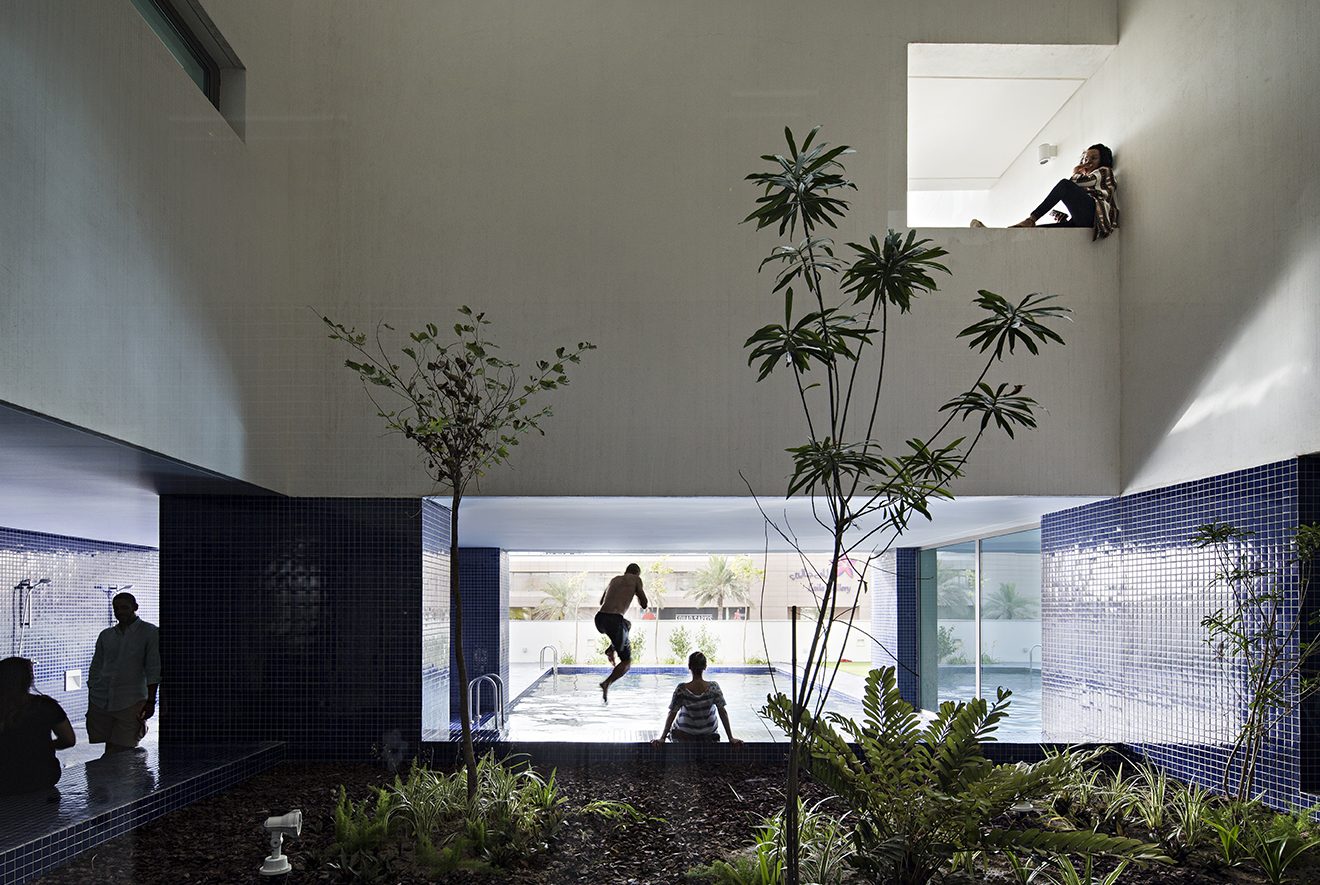 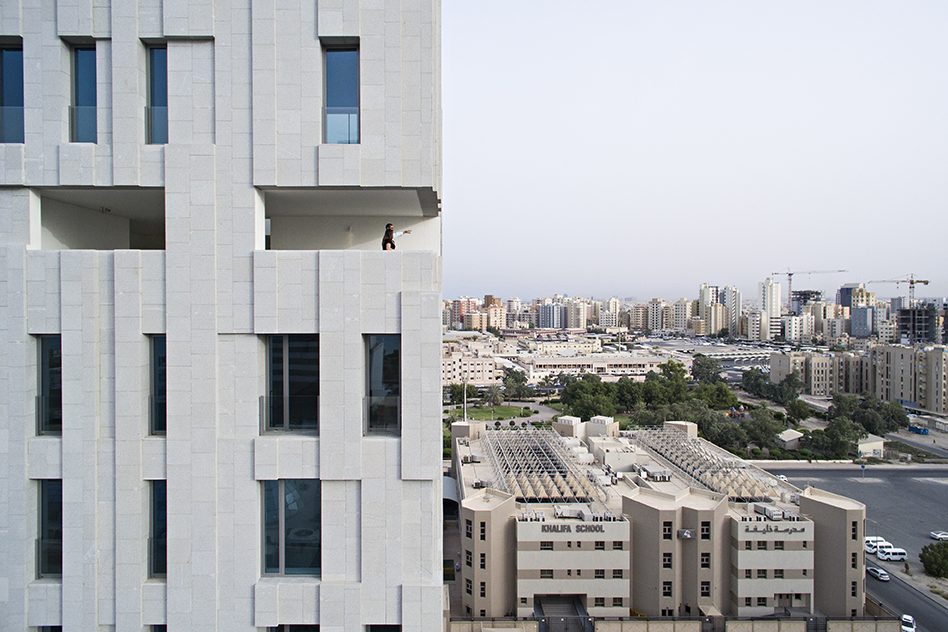 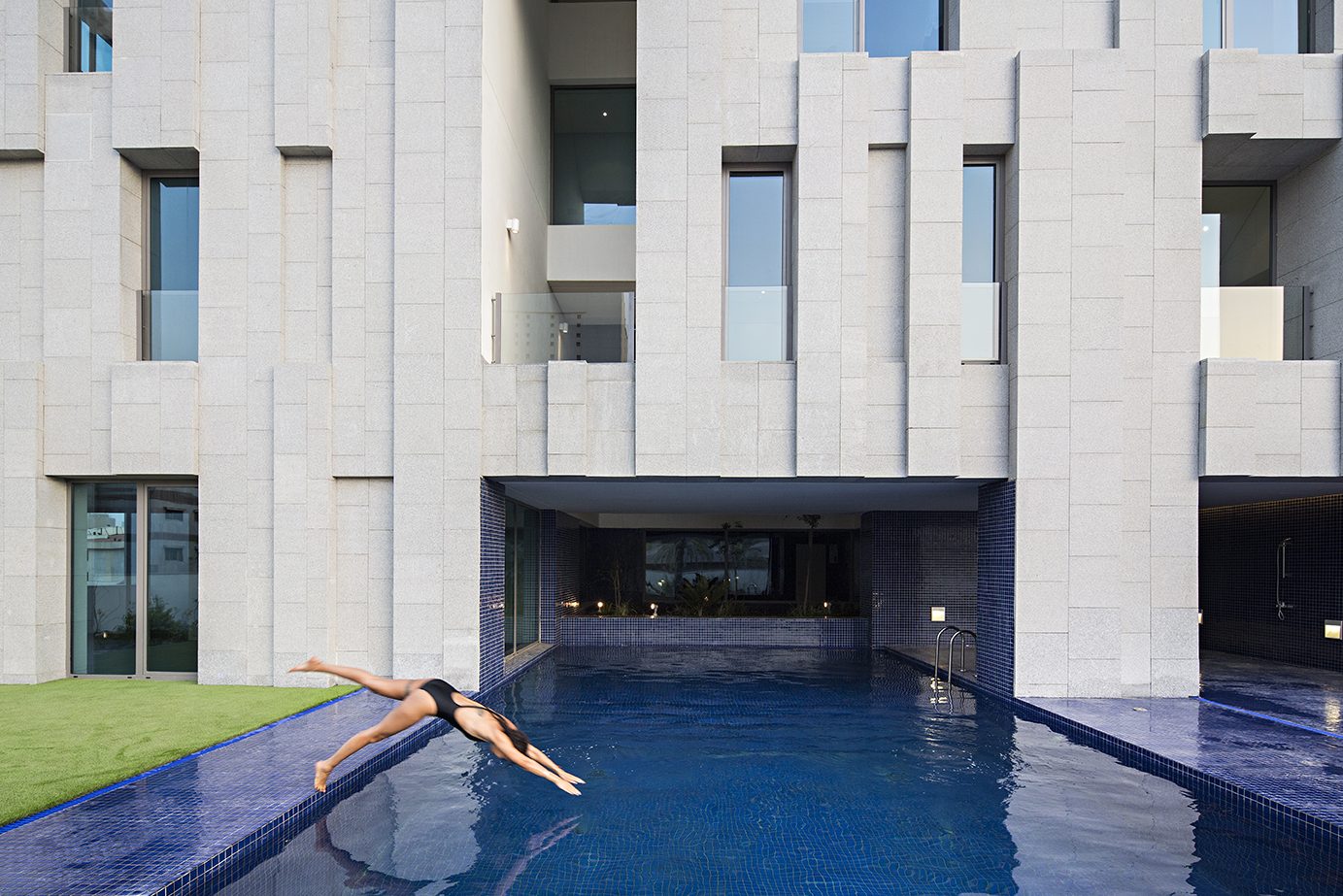 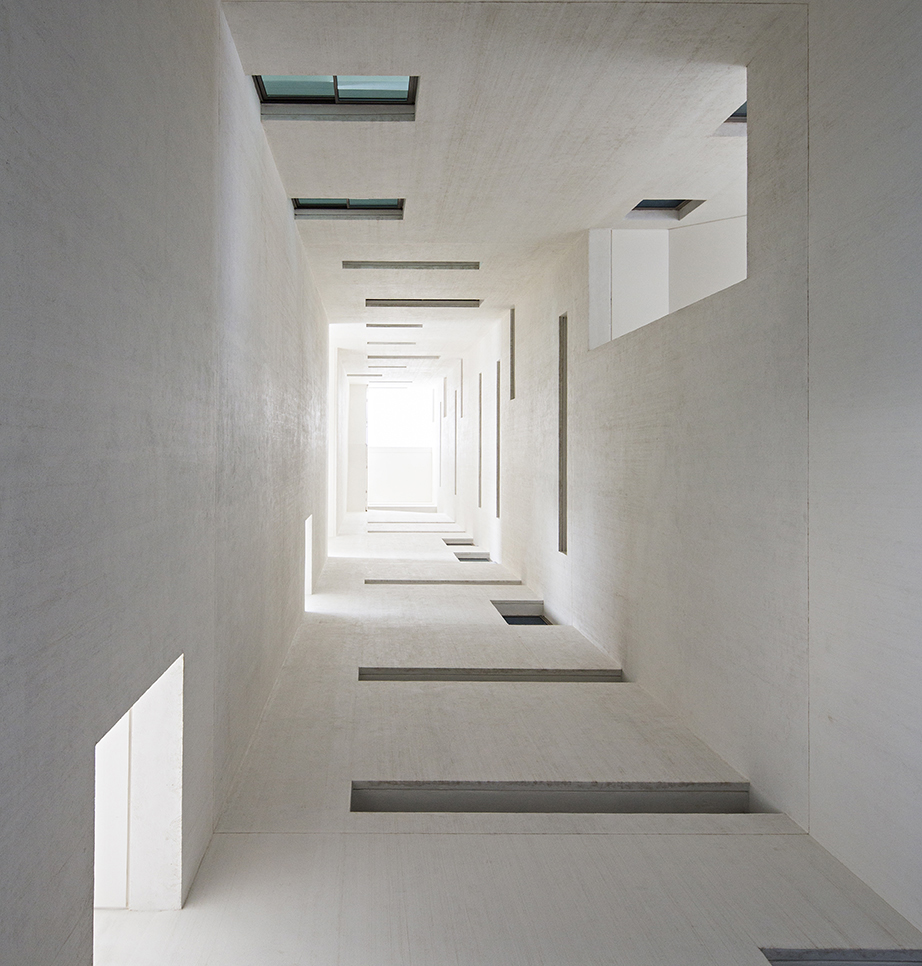 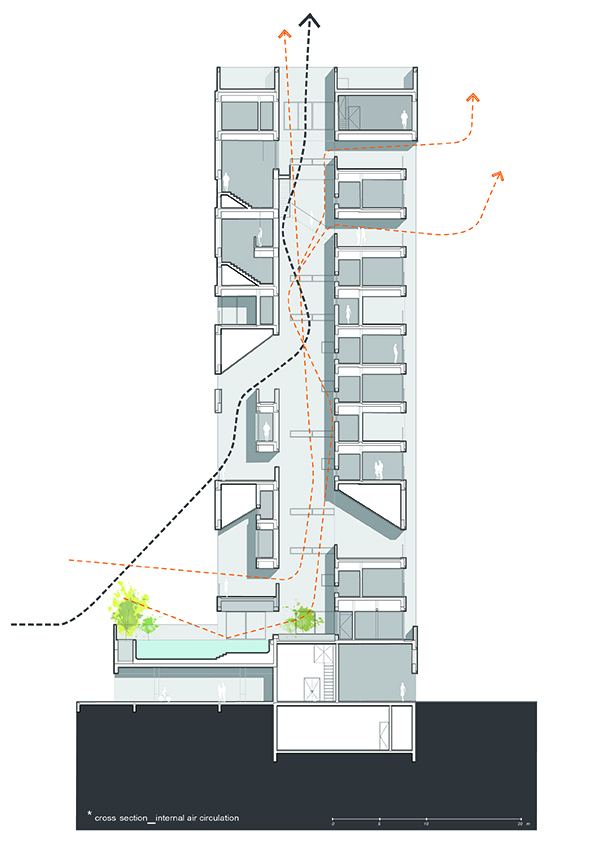 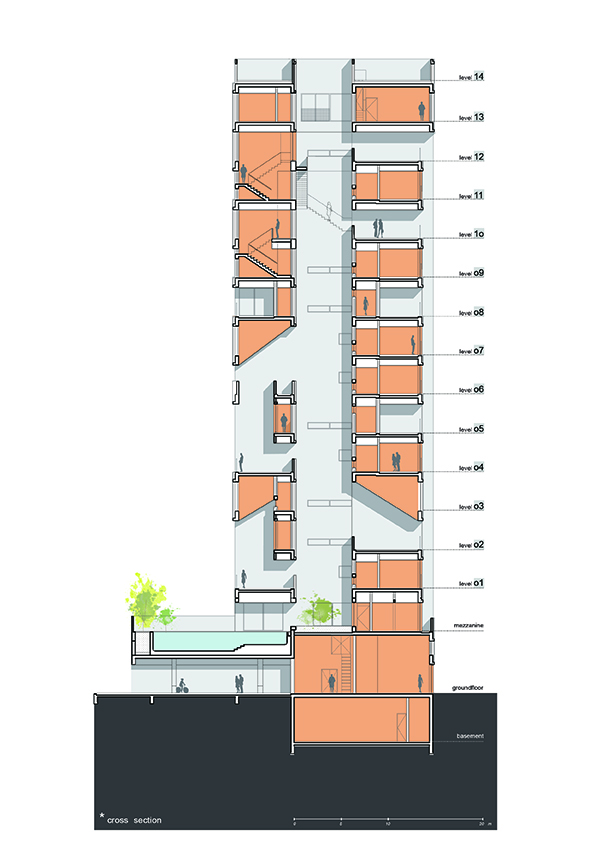 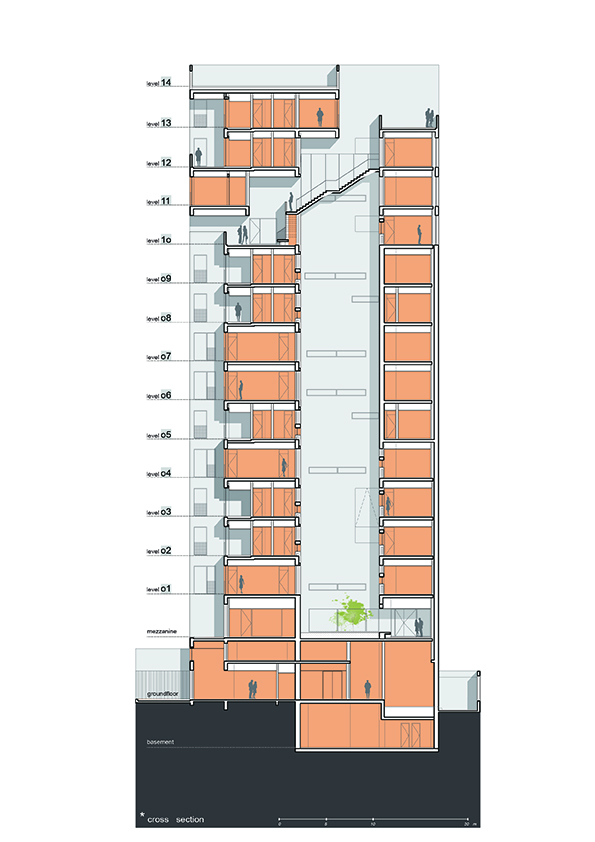 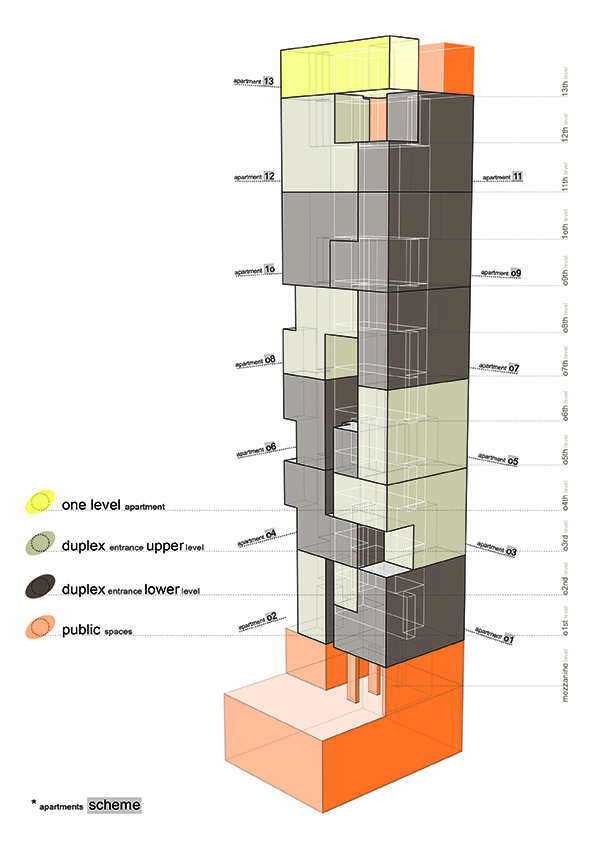 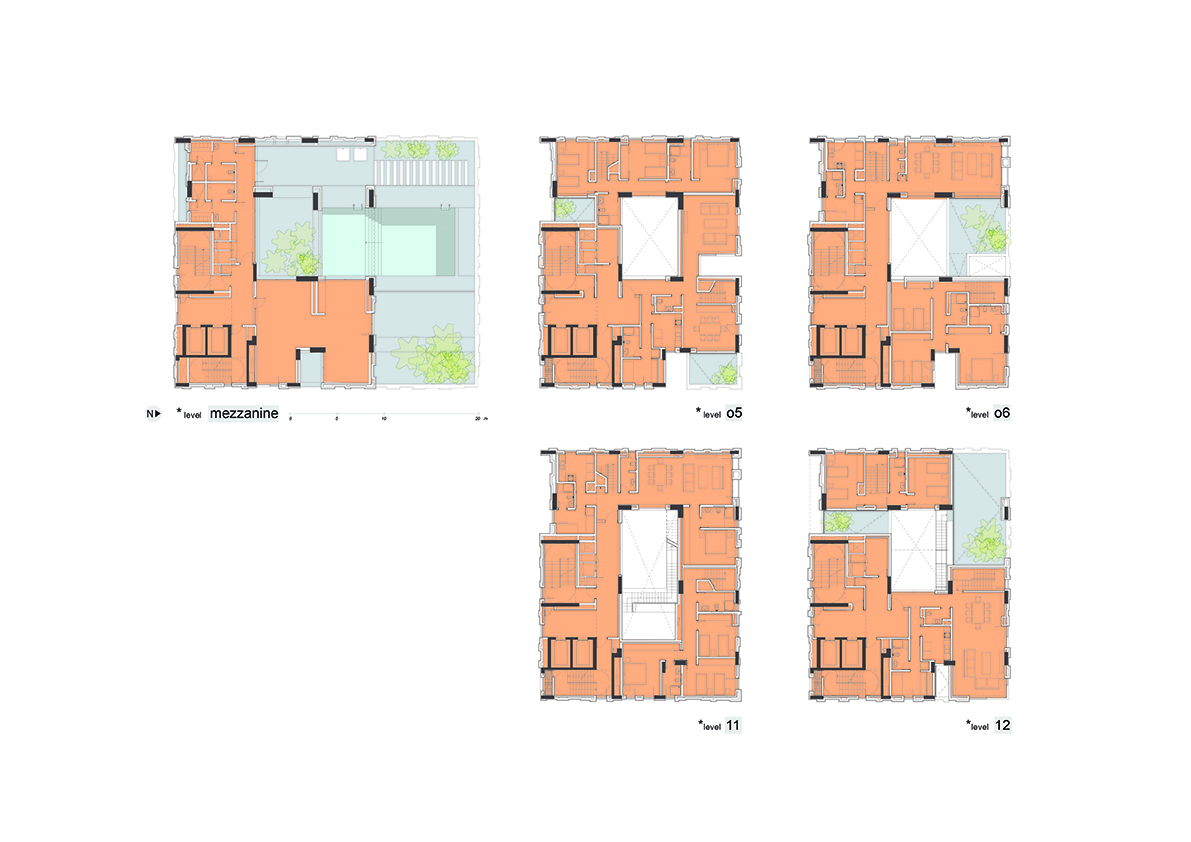