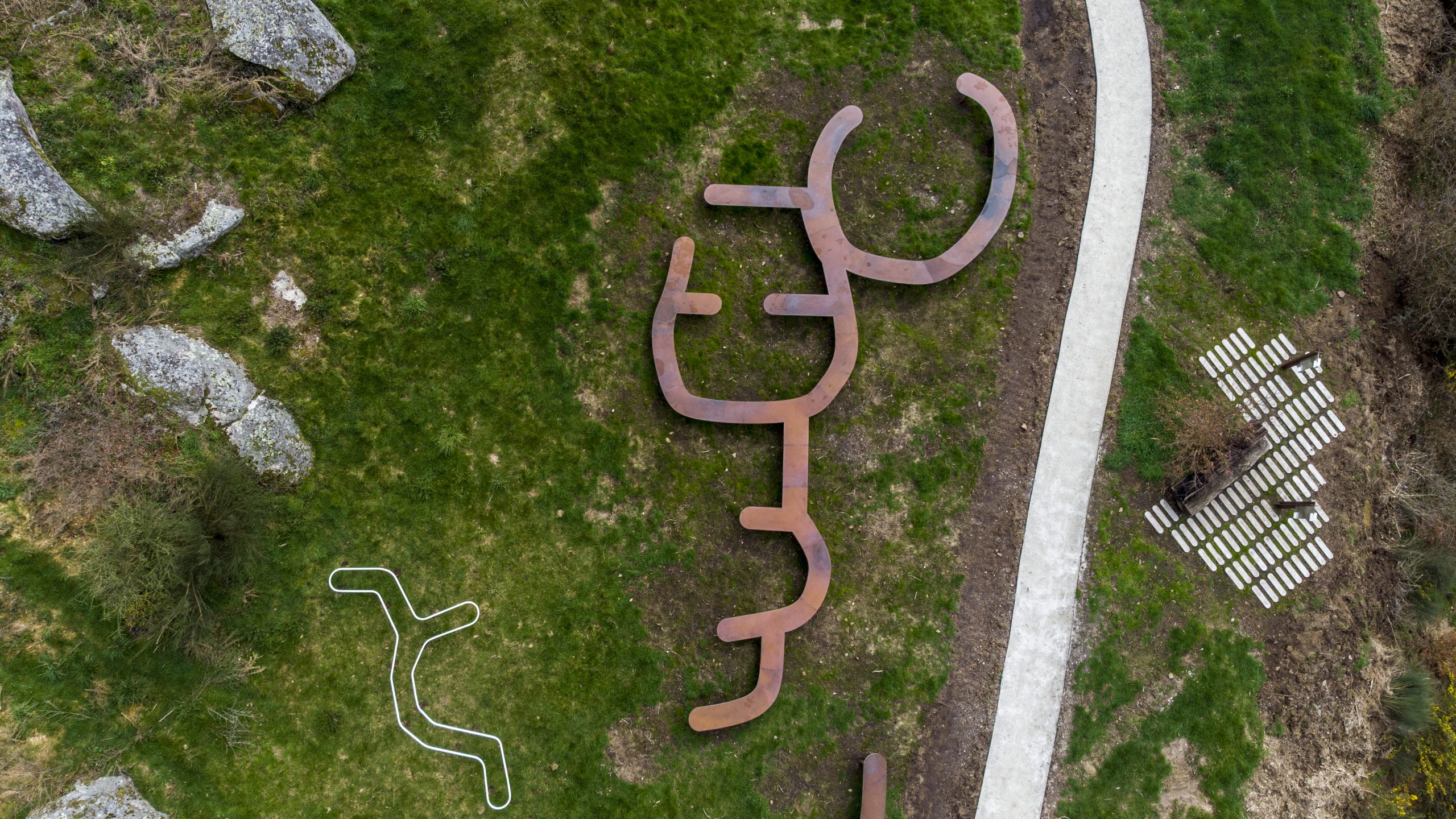 The First Stage of “Trazas de Pontevedra” concerns landscape interventions carried out in 3 of the 18 Galician-Roman settlements in the province of Pontevedra which are part of the musealisation and enhancement project by AGi architects. These interventions will lay the basis for the entire project in order to create a unique network for the reinterpretation of Galicia’s archaeological landscape.

The interventions in the castros—or Celtic forts—of Alobre, Toiriz, and A Subidá have been sensitive and respectful towards each site’s surrounding environment, as will happen with the other sites in subsequent stages. The aim was to provide them with a distinct, simple, and sustainable identity, while offering a singular experience for visitors and becoming a driver for local tourism. AGi architects have approached the project as a natural museum where the memory of the landscape is recreated by means of native vegetation, different layering patterns—sound, lighting, ground, and routes—, and a “information pikes” system used as generative and museum-building elements. This creates a cohesive overall experience that brings both the natural and that abstract, imagined, and designed world closer to the observer.

Each of the three forts in this first stage has been provided with access points and routes, with signage to designate the intervention areas and the preventative protection of the sites, as well as singular elements for its musealisation, with the aim of providing the public with a historical narrative around these prehistoric settlements of great scientific, historical, heritage, and socioeconomic interest.

These first three interventions develop transferrable strategies to be implemented in the rest of the sites included in “Trazas de Pontevedra”, with landscape and material approaches that adapt to each local environment in order to preserve their own distinct essence and personality.

Located close to the current seaport in Vilagarcía de Arousa, this is a settlement of considerable size that would have sat at the sea’s edge at the time, and is an excellent example to help illustrate how most of the coastal forts in the province of Pontevedra worked.

The landscape intervention enhances and develops what is already there, offering a cared and designated space around the remains in order to provide better views. The disperse yet orientated pavement designs and the landscape proposal are both more part of an intentional system of call and attraction than mere framed and built signage. The museum content of the site is gradually shown to the visitors, alternating between viewpoints, information stands, and benches. The entire intervention (pavements, “info-pikes”, or urban furnishings) is shaped around a square grid overlaid onto the site. This grid represents an underlying order in an inevitable reference to grid systems used in archaeological sites.

The intervention also makes use of plant elements, both for the anchoring of slopes and embankments as well as to finish and indicate the routes from the main entrance, always using species that are perfectly acclimatised to the local environment and with virtually no maintenance.

Given the plans for a future extension of the dig site to the north, the intervention in this area is minimal in order to avoid interference and increased costs during future works.

This Celtic fort, from the Iron Age, is formed by two fortified enclosures: the higher central platform or croa, Eira dos Mouros, and the terraced area of the antecastro, lower in elevation and towards the south and east. Between them they occupy an area of around two hectares.

Although the site is yet to be excavated, a magnetic survey using ground-penetrating radar in 2012 showed the layout of the existing structures, still underground. The intervention by AGi architects seeks to resurface the way in which the Celtic settlement occupied the headland in its day, avoiding invasive or imitative approaches, allowing the visitor to imagine the civilisation that inhabited this promontory thousands of years ago by means of its traces drawn over the landscape.

With this aim in mind, the design includes a series of pieces in Corten steel, placed on site almost as sketches in the landscape, replicating the structures that lie below ground. So, the pieces have a two-fold objective; to provide the visitor with an intuitive interpretation of the settlement below ground and to create a place that can be used by the local community and visitors.

The proposal strives to be sensitive towards the special nature of the promontory and its privileged views over to the west. Two landscape “pikes” are placed along the western boundary, making the most of the panoramic views and framing the nearest castros with which the ancient inhabitants of Toiriz would have established social and economic ties.

The Celtic hillfort in A Subidá is found on a small and solitary hillock with steep slopes and excellent views over the town of Marín and Pontevedra’s estuary. It is a Romanised settlement of more than three hectares with a double-wall fortified boundary. The steep inclines are an unavoidable starting point for any musealisation proposal. In this sense, the project’s intervention area goes beyond the immediate surroundings of the site, extending down the entire path that will lead visitors from the nearest access point, at the bottom of the slope. The idea has been to recover the path of least incline, avoiding any groundworks that could damage the slopes and the potential structures that remain underground. The path is marked with paving elements that signal every metre in elevation. A series of “pikes” provide the necessary landmarks to guide the public while also serving as a support for museum content, offered gradually as they ascend the path.

Rest areas are located throughout the route, providing a moment of pause to take in the landscape that still dominates this settlement today. The eastern slope of the hillock has been landscaped with native plant species. With overlapping flowering seasons, the selected species form a colourful blanket that covers the hillside, acting as a natural sign visible from the road below, and accompanying visitors on the path.

Once closer to the archaeological site itself, a platform of compacted ground provides a more comfortable visitor experience, allowing the public to calmly contemplate the site and its surrounding landscapes. 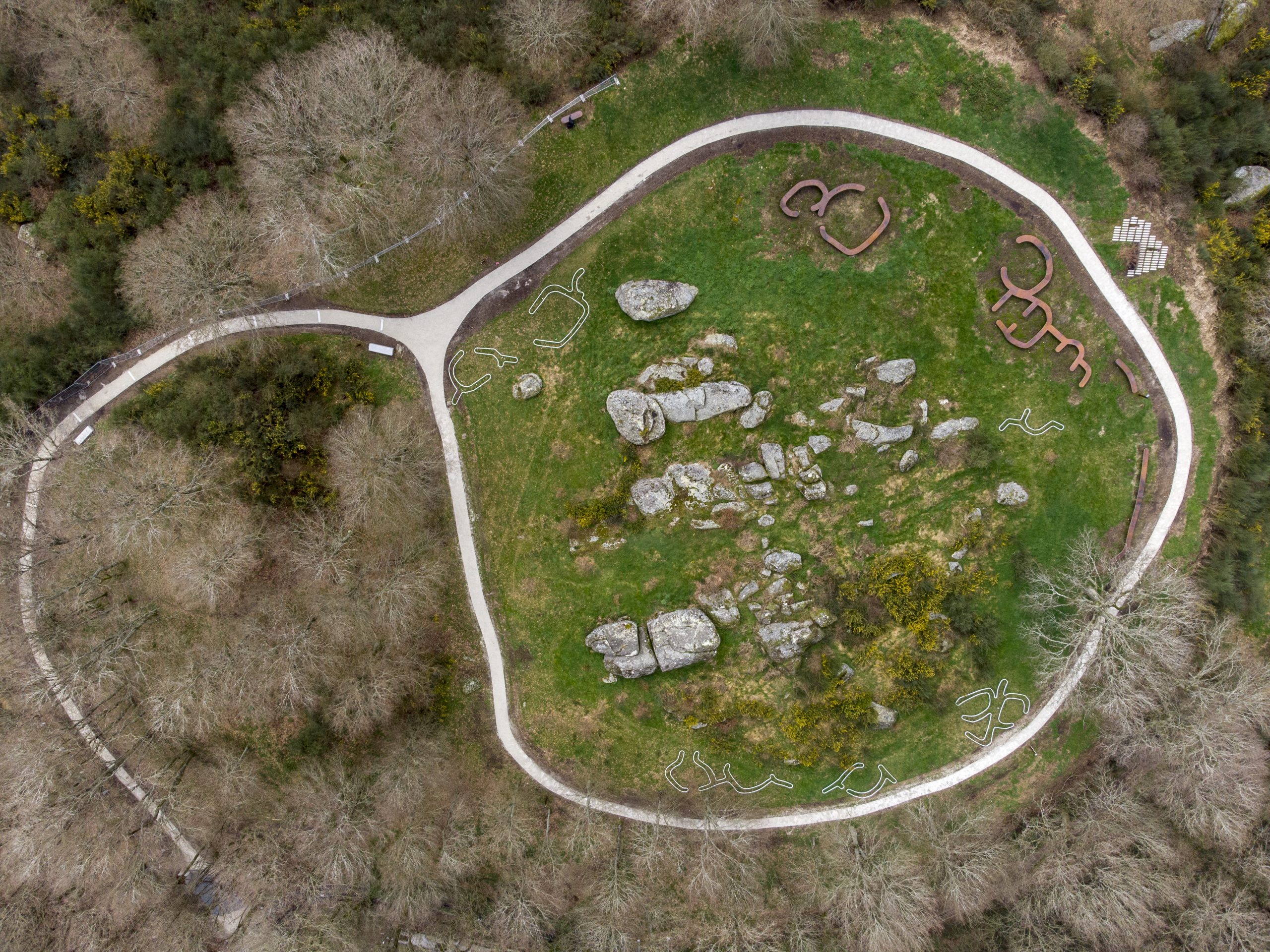 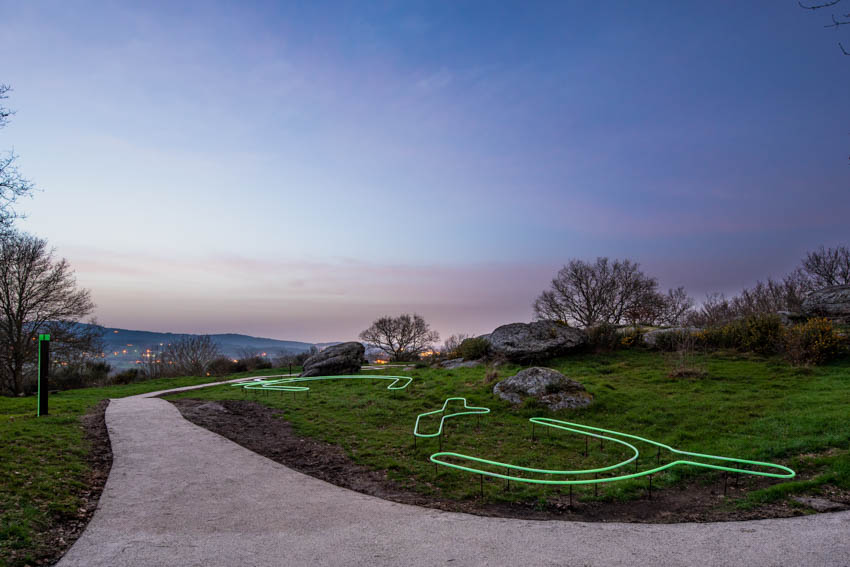 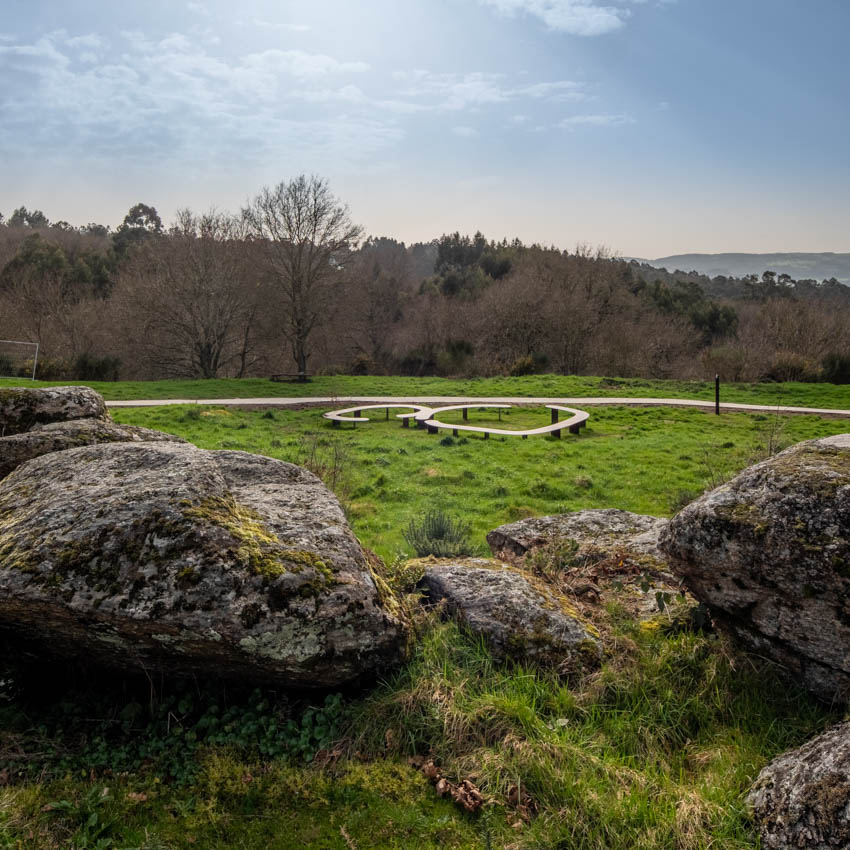 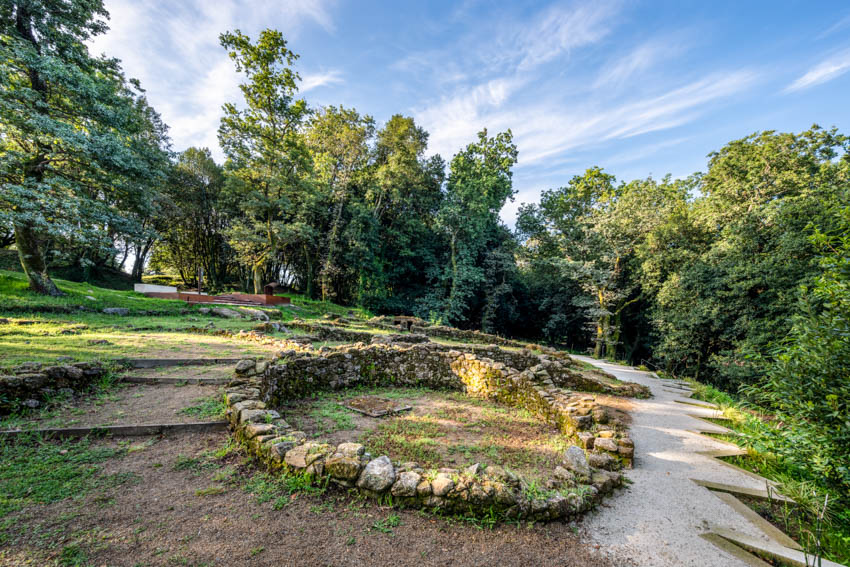 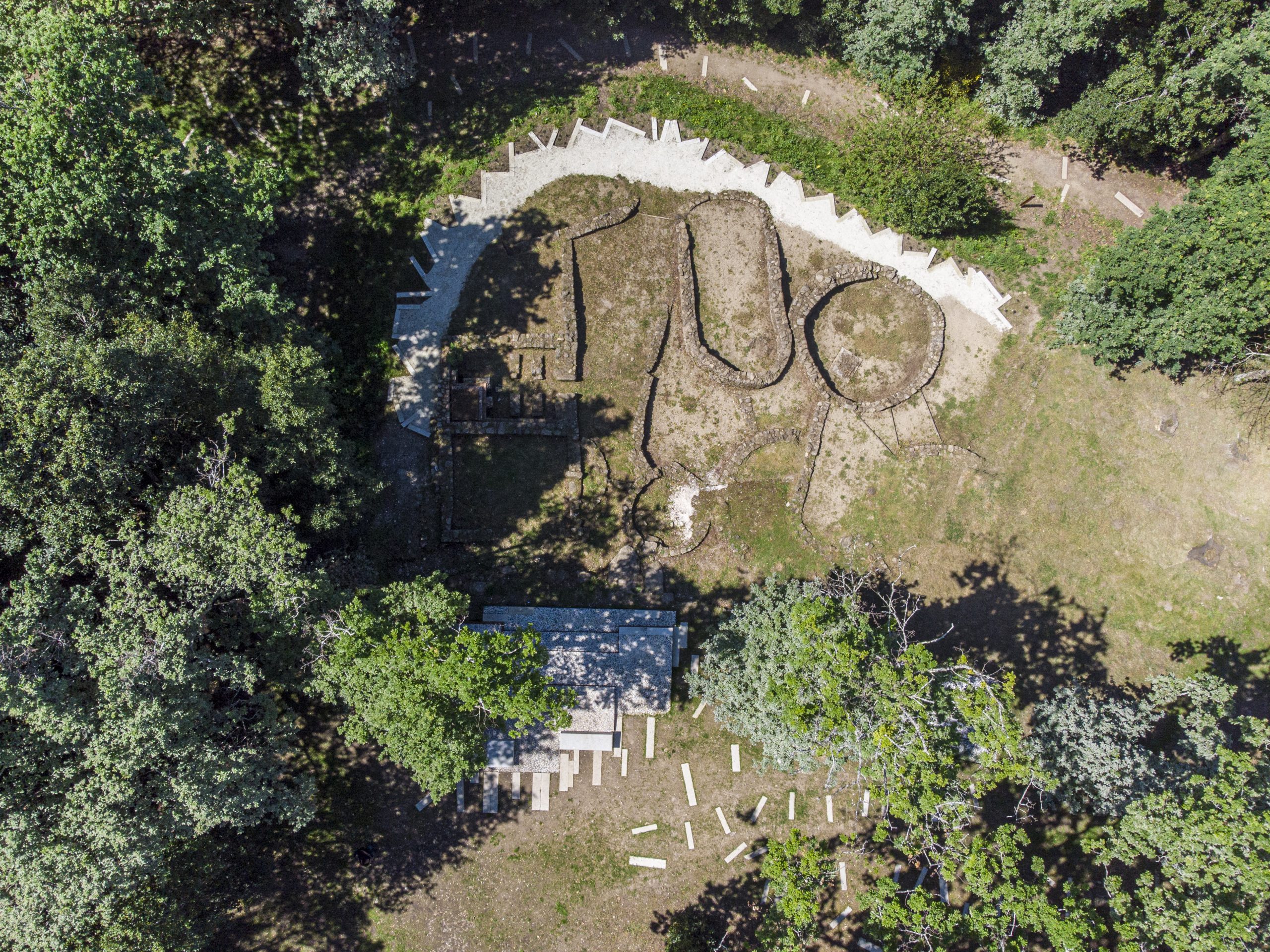 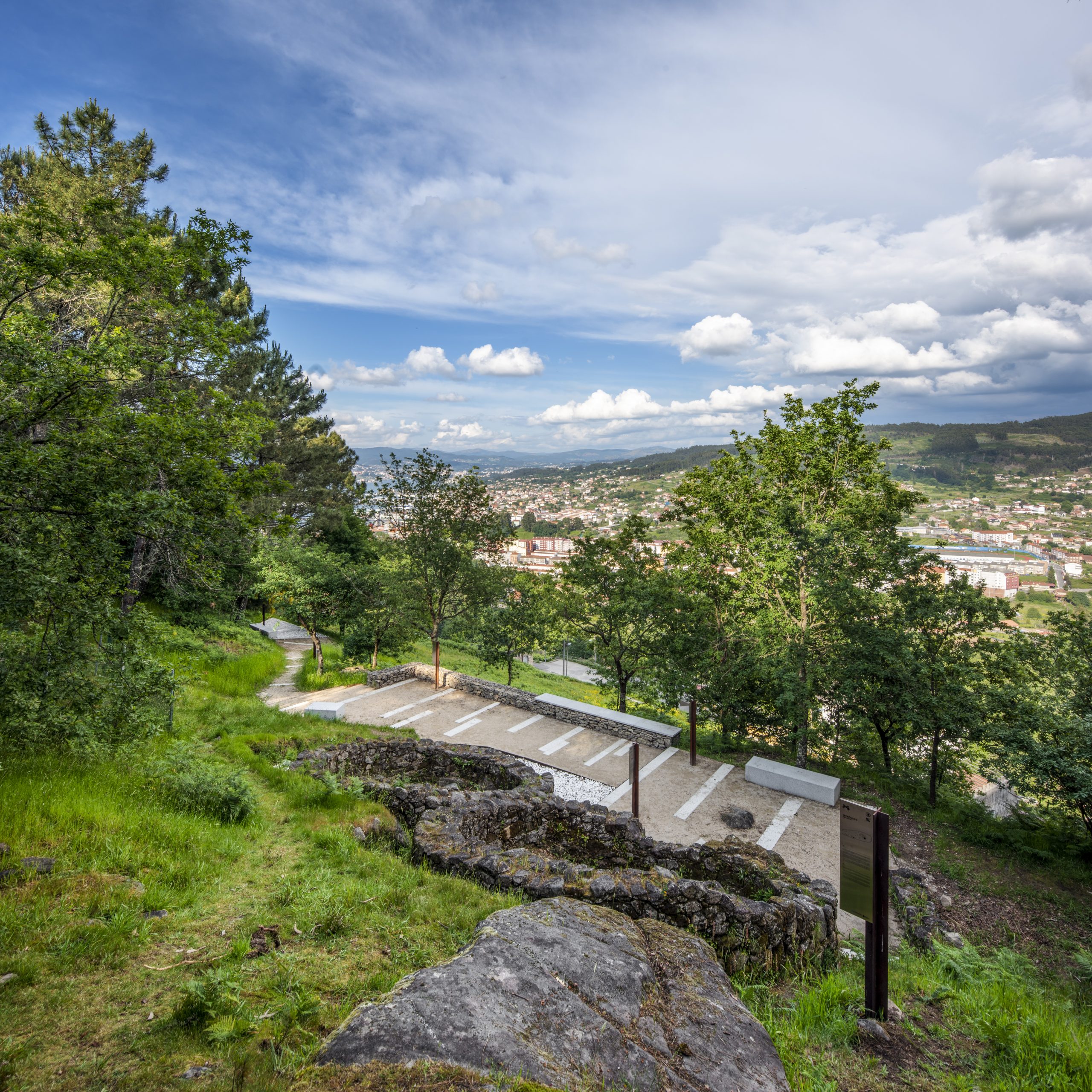 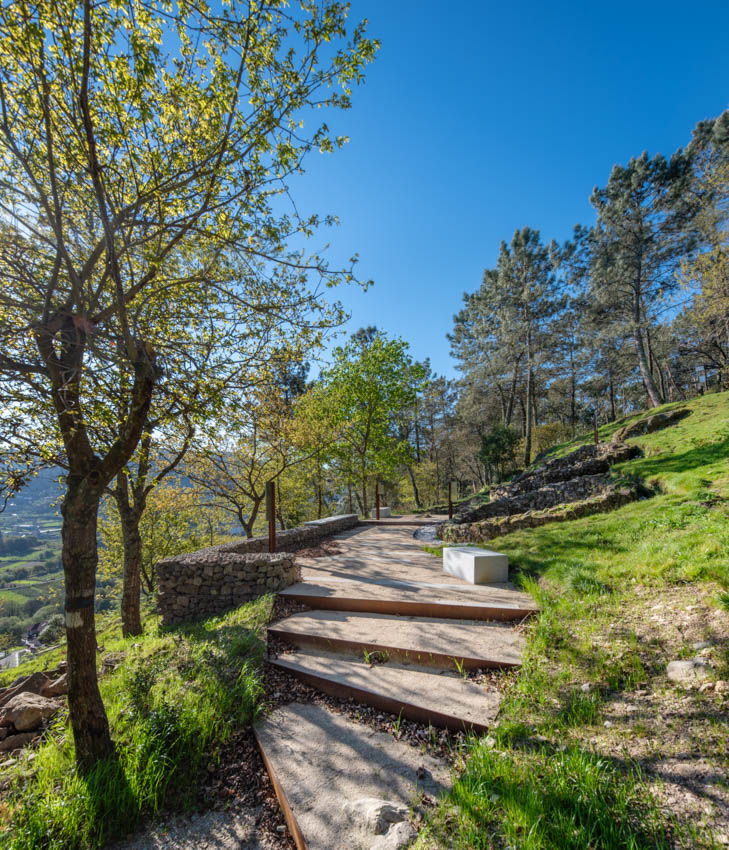 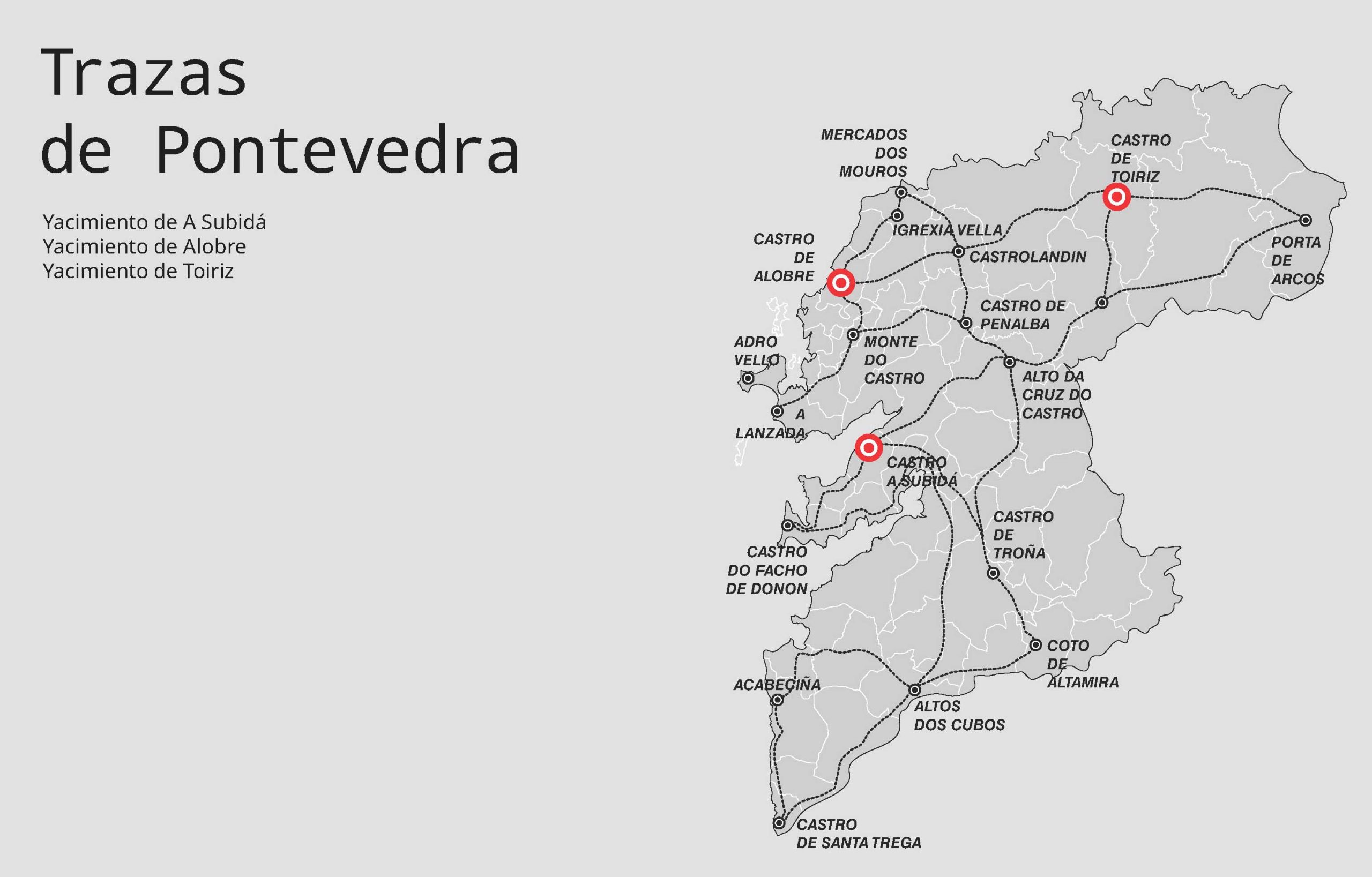 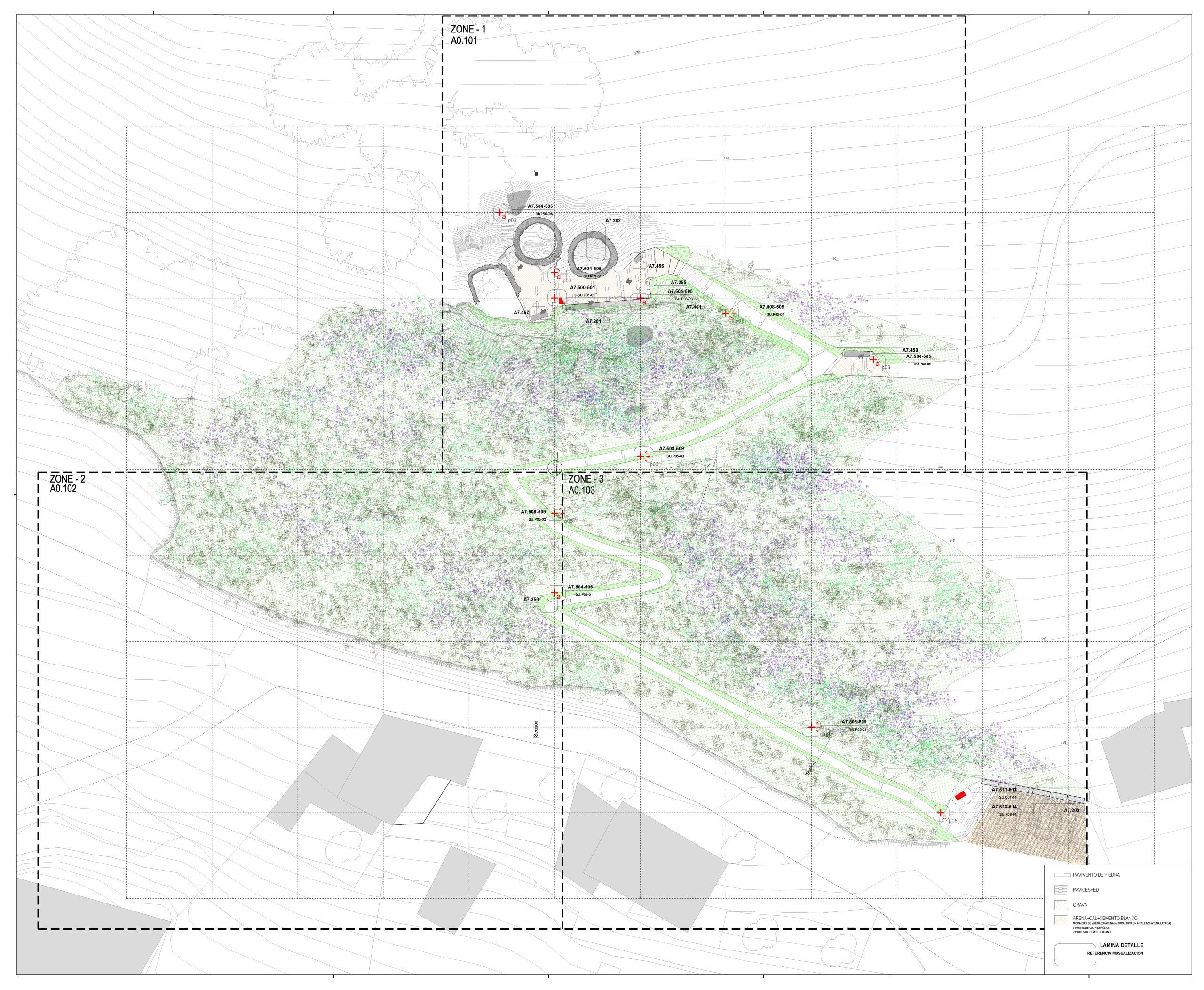 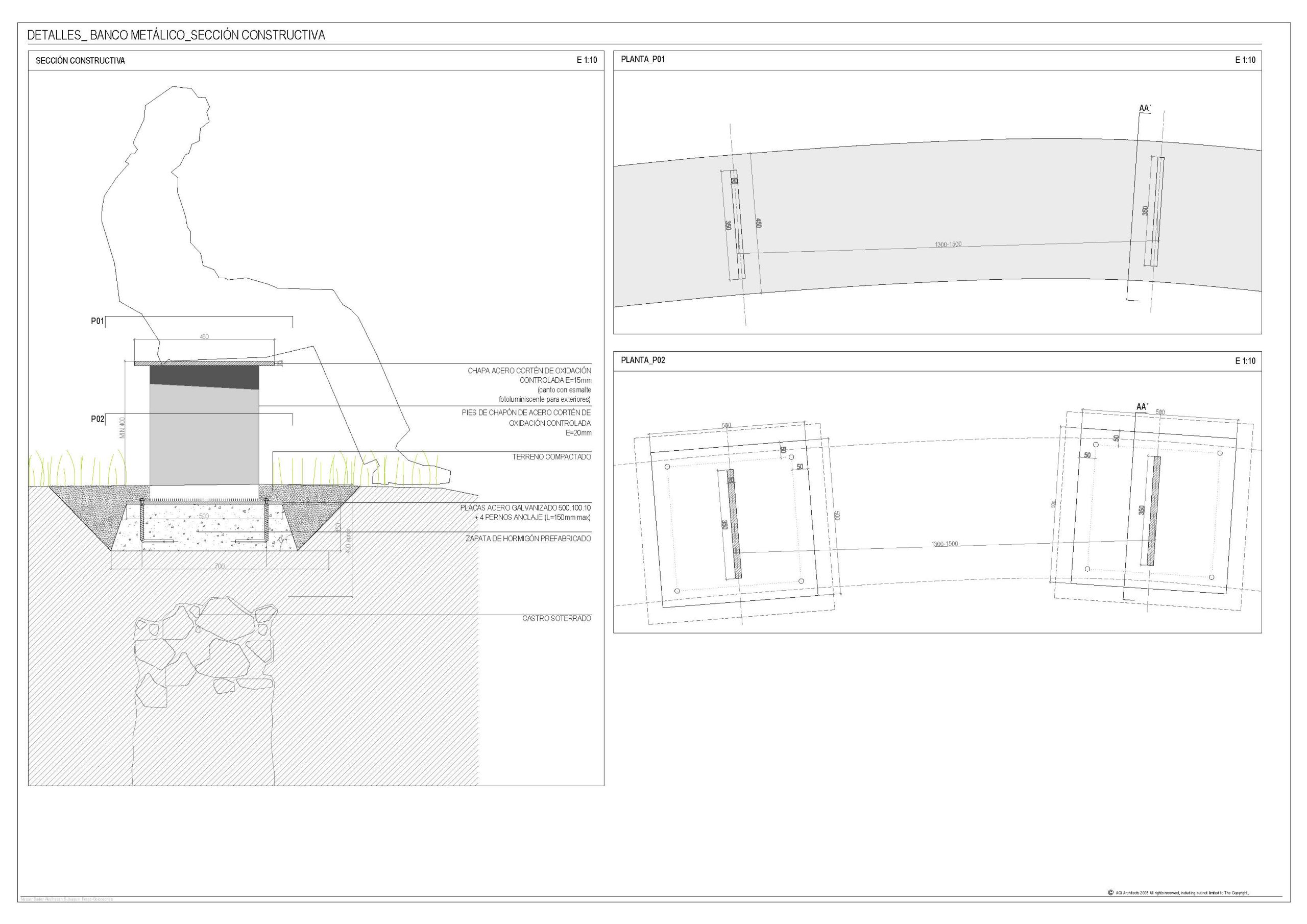 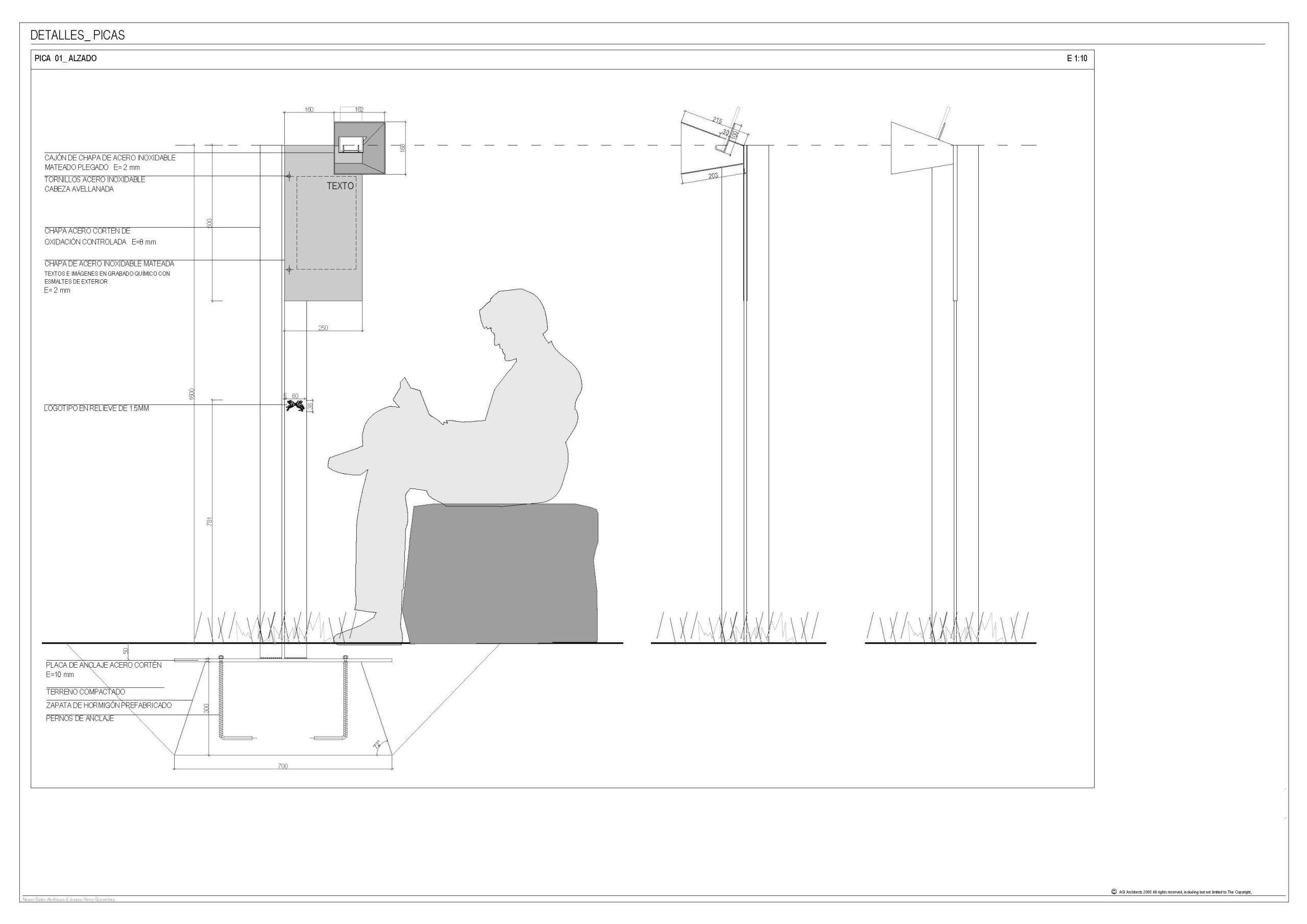