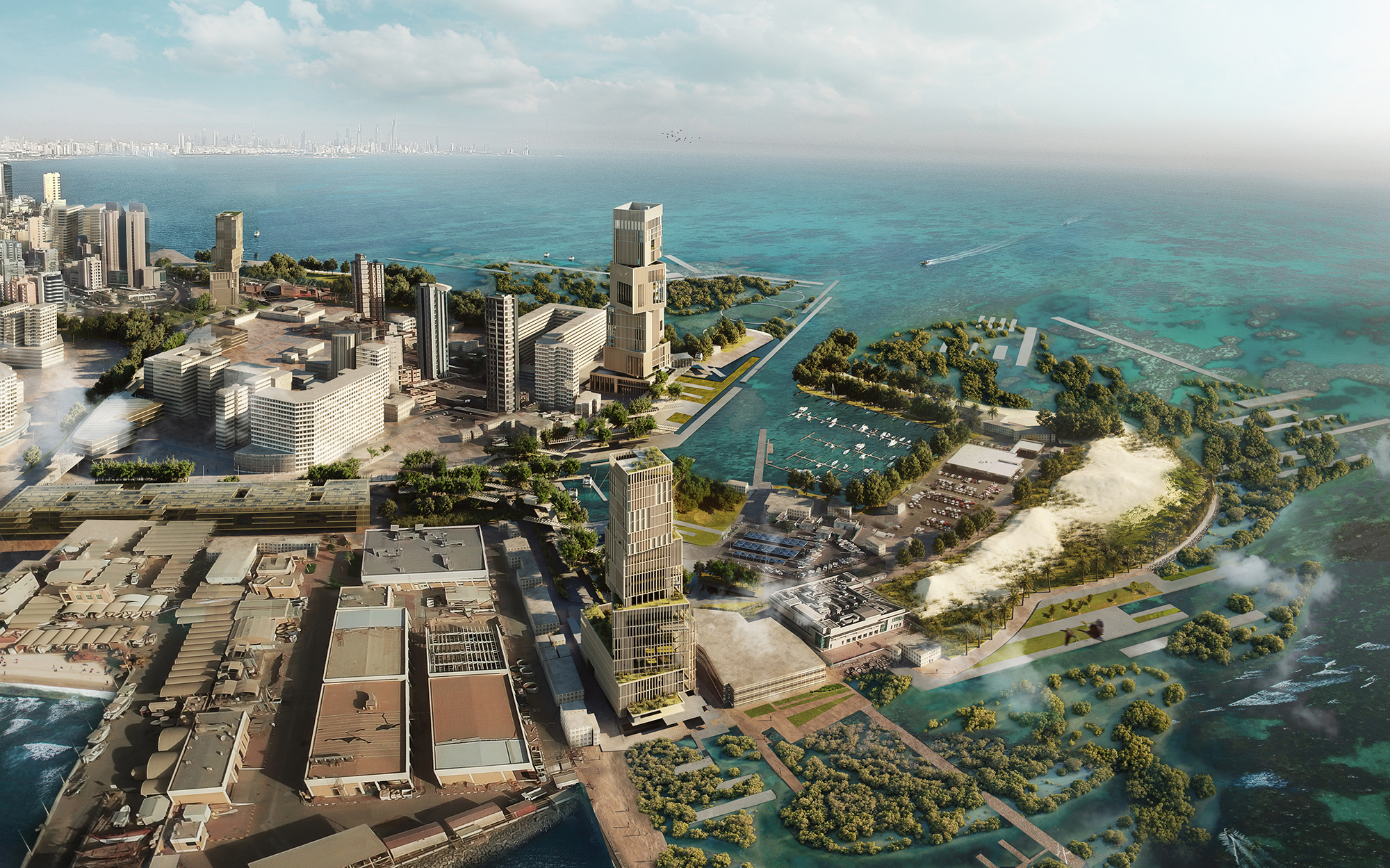 – Urban approach:
The KFAS Campus district is envisioned to be the first prototype research area for the regeneration of Kuwait. This strategy includes developing a long-term, phased out, plan which utilizes new technologies and encompasses the complexity and interconnectedness of nature.
Our design proposal, which is based on a scientific methodological approach, engages the problem of the ecosystem on different scales with a wide spectrum of tools. It is proposed to work both from the mainland and the seaside, in an attempt to recover the sensitive coastline natural ecosystems, which were once the main source of living for the local population.
On the seafront, the idea is use both human urbanism and infrastructure to bridge the natural world with the artificial. This infrastructure will accommodate research labs, fish and coral breeding farms, and will support the growth of mangroves and bulrushes plantations, which are used to filter and block out toxic bacteria and pollutants. As a result, contaminants will be treated adequately or completely prevented from reaching the sea. Another byproduct of this facility is to provide new sources that generate clean energy (solar power and cooling, salinity gradient energy, tidal and wave energy…), with an aim to create a self-sufficient district, disconnected from the main traditional grids.

On the mainland, a new urbanism is introduced, one that addresses new ways of transportation, promoting pedestrian movement, efficient consumption, and provides flexible living options for all types of users (young & old, local & international, traditional & western etc.). People’s movement will be channeled through the integration of smart transport systems (such as cable cars and monorails) to create connections on micro scale in the KFAS campus district with a potential to expand and connect to major Kuwait landmarks.
Special attention is given to the public realm, which recovers its traditional character and significance as the main source of social interaction.

-The New KFAS Headquarters and Conference Center:
They are envisioned as the bridge between tradition and modern culture, an attempt to become the symbol of 21st century Kuwait. Their designs are steered by the vision of new generations of talented and dynamic Kuwaitis, who, eager to transform the country into one of the most advanced economies of the world, are generating a strong new identity.
The program is structured into five different clusters, each of which uses local values that best fit the allocated function. Programmatic diversity and flexibility are key features to provide different types of experiences (now and in the future) to the end users. Repetitive floor plans have been avoided, resulting in a complex structure that fosters research and experimentation processes, while adhering to the logistical and institutional support required.