A greenhouse is one of the most striking elements in a garden. During the 19th century they became very fashionable: wealthy households were keen to incorporate one of them into their architecture. Maybe this is because greenhouses represent more than anything else the idea of architecture as a space of desire.

They are also an architecture inevitably linked to European empires. Explorers, botanists, and navigators began importing exotic plant species to the old continent around the 17th century. The conservation of these plants outside their original climates was the basis for certain experiments with solar heating, using passive techniques thanks to glass technology. 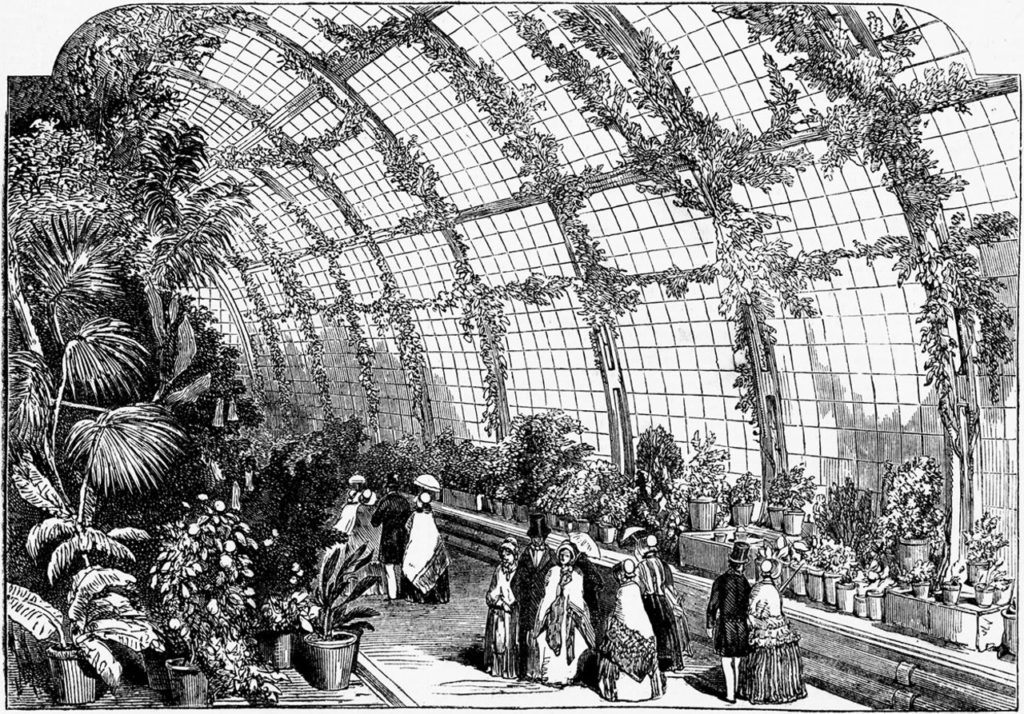 Even before that, the love for foreign plant species had given birth to special architectures that would allow cultivation in non-native climates. Shelters were common, covering plants and lifting them from the ground to protect them from the cold. Trees that could be moved and detachable roofs were often used. Stoves and heating systems helped plants make it through the winter.

With the technical development of glass in the 18th century, greenhouses began to become popular. The bourgeois class was growing and it used to imitate the customs of the aristocracy, which had spread the passion for fashionable gardens. Climate control systems (lighting, ventilation, heating and irrigation) were improved. At the same time, structures were radically modernised. New metallic uprights slimmed down architecture, thus increasing the entry of light and the dimensions of indoor spaces. 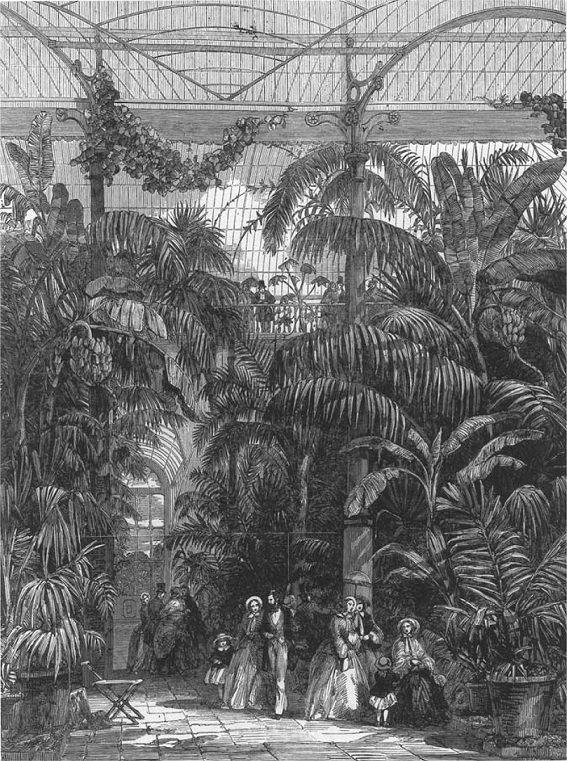 Industrialization allowed the use of glass and steel in massive numbers. Although the greenhouses were only addressed to a select clientele, railroad and shipping soon allowed the market to expand. By the end of the century, the steel industry had grown a good deal. This allowed a large production. At the same time, the railway guaranteed distribution. In the meantime, new glass techniques and tax cuts made things cheaper.

Several companies developed prefabricated greenhouse systems, which could be delivered by ship to their destinations. The orders, made by mail, were sent mainly to places within the British Empire. The mail kit was a great success in tropical climates. Mounts and frames, available in different styles; transparent, translucent or coloured glasses; and other details were all illustrated in the catalogues. In 1858, the gardener Joseph Paxton presented “Hothouses for the million. The new portable and economical hothouse”, a new transportable and economical greenhouse. He had developed this design from another frame designed for the Crimean War that could be sent folded and glazed. Cheap and practical, they were aimed at the middle classes. 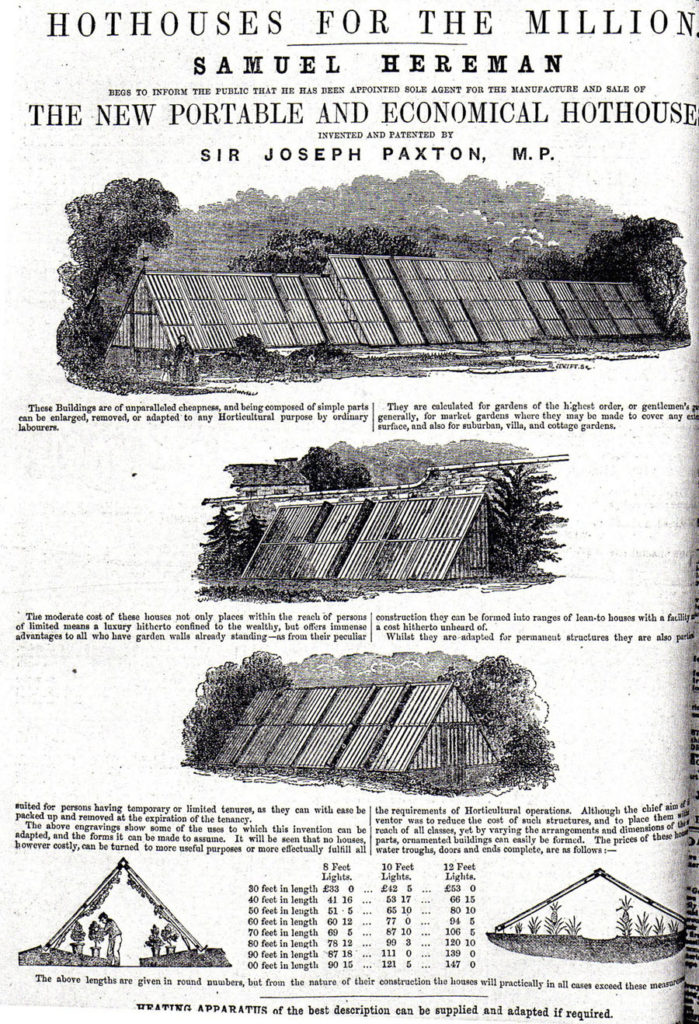 At that point, in about the middle of the century, it was considered necessary to build a large building to house the Great Exhibition of the Industry of All Nations in Hyde Park. This new Crystal Palace would be an opportunity to put the accumulated experience in building greenhouses into practice on an unprecedented scale.

The building was based on a 24-foot modulation, designed according to Paxton’s usual zigzag system. The vertical cast support structure was prefabricated and transported to the site and assembled there. All the supporting elements had the same outside diameter, and different thicknesses according to the number of floors they sustained. The Crystal Palace was a large container, in the shape of a basilica. It enormous dimensions proved to be an advantage as they served to cover the group of poplars that stood in the middle of the site. 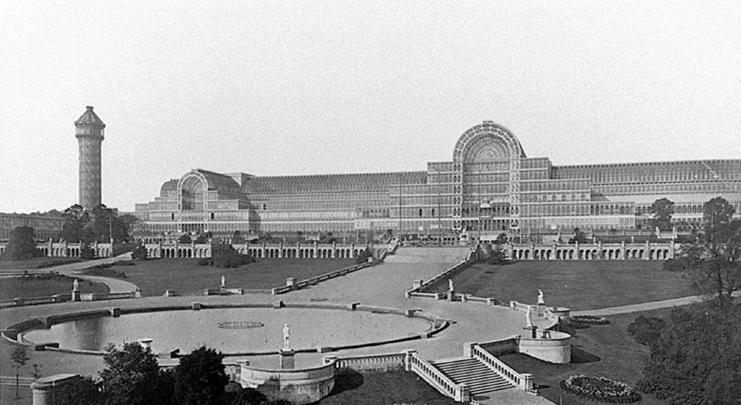 After the important exhibition, in 1852 the large greenhouse was dismantled and moved to Sydenham Hill, easily accessible from London by rail. The design became more grandiose: a basement was added, as the land was on a slope. A vault was built in the central nave, and two floors were incorporated into the transept. Inside, the architecture of several epochs was portrayed, going from the Syrians to the Renaissance. Large trees, exotic vegetation, fountains and swimming pools filled the interior. In the center, an organ and a dance space for up to 4000 people animated the visits. The new building was much more complex and also it was heated.

In 1936, a fire which could be seen from London, destroyed it. 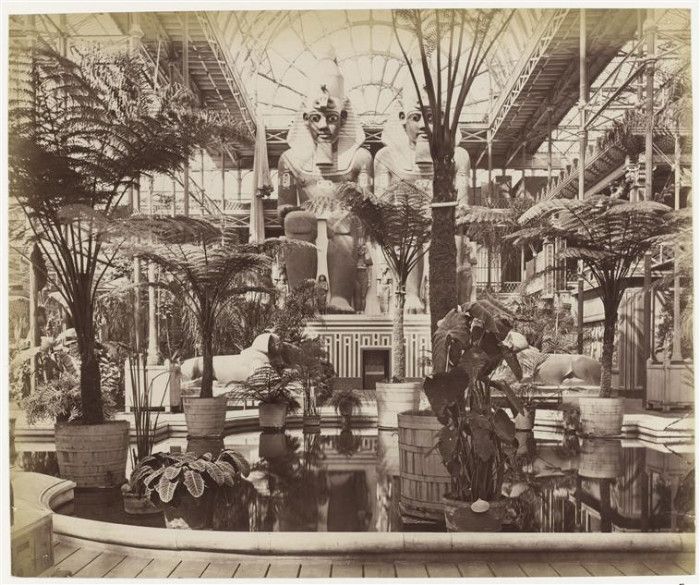 Greenhouses, and the Crystal Palace as its most perfect materialization, were a displacement device that transformed some places into others. They replicated an environment in some other setting different from the original. The transparent enclosure of the greenhouse constituted the most invisible and difficult to perceive physical separation possible.

The glasshouse enclosure also involved a shift of interest from the constructed surface to its interior life. The disposition of the indoor world created architecture. Temperature, humidity, air movement; objects, plants, machines and furniture shaped the spaces as a result of the disappearance of the visual appearance of the border.

The greenhouse attempted to move distant places into its interior, reproducing foreign climates and landscapes without visualizing the condition of artifice, using tricks to hide the mechanisms that allowed the replica to be complete. In an attempt to make that dream come true, the steel structure was covered, trying to recreate with almost absolute fidelity the Brazilian, Indian or African forests. The typical ‘tropical forest’ was accessed along a rocky valley covered with yucca and other plants that resisted the temperate climate. This way led to the half-hidden door. Inside, palm trees and passifloras obscured the structure.

Thus, by means of dislocation, composition, air and concealment, the greenhouse functioned as the architectural instrument that allowed its owners’ wishes and desires to become effective.

The architecture of AGi architects incorporates nature into the built spaces, being the relationship between exterior and interior, and the comfort and aesthetic experience of the domestic space central to the designs.