Ergonomics, lightness, vibrant colours. Combining industrial materials such as steel or vinyl with natural elements such as wicker or rattan characterise these five outstanding mid-century outdoor chairs perfect for the garden or the pool. 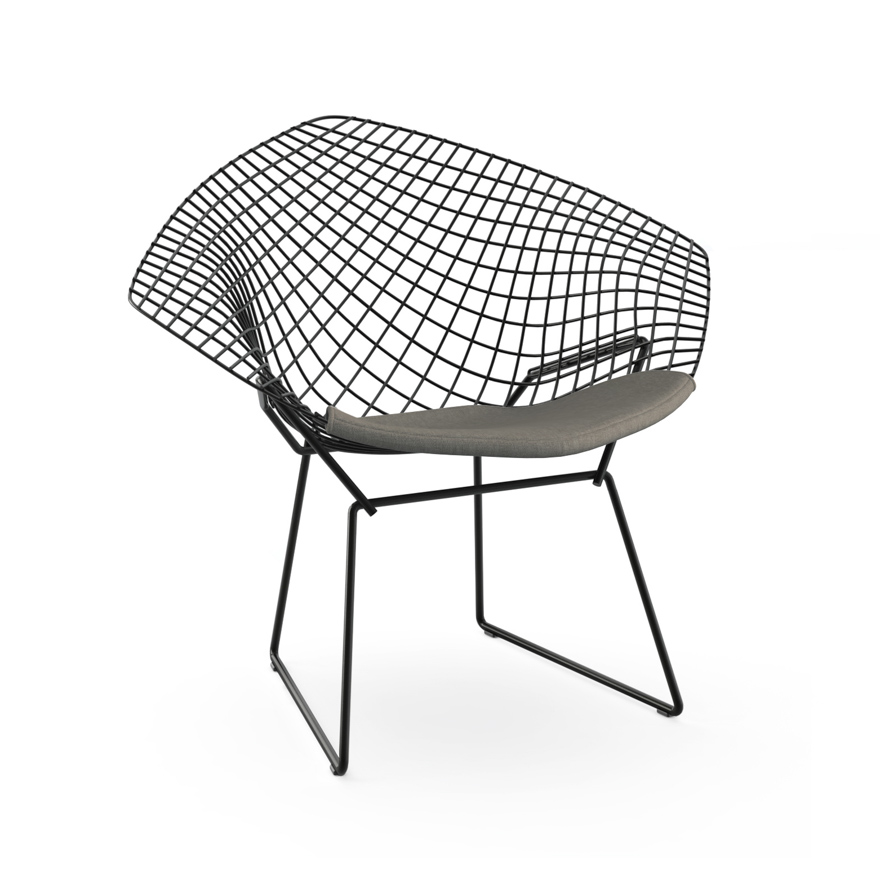 The Italian expatriate in the United States Harry Bertoia (1915-1978) studied at the Cranbrook Academy of Art. There, he met Walter Gropius, the Eames and Florence Knoll. At Cranbrook he was soon appointed professor of jewelry and metal work. Charles and Ray Eames’ wedding rings were designed by him in 1941.

In the mid-1940s, Florence Knoll created a leading design department at her and her husband’s firm, which was North America’s most prestigious post-war design company, Knoll Associates. It was the Knoll Planning Unit. It brought together architects like Eero Saarinen, Marcel Breuer and Ludwig Mies van der Rohe, and sculptors like Isamu Noguchi. In 1950 Bertoia began working there. 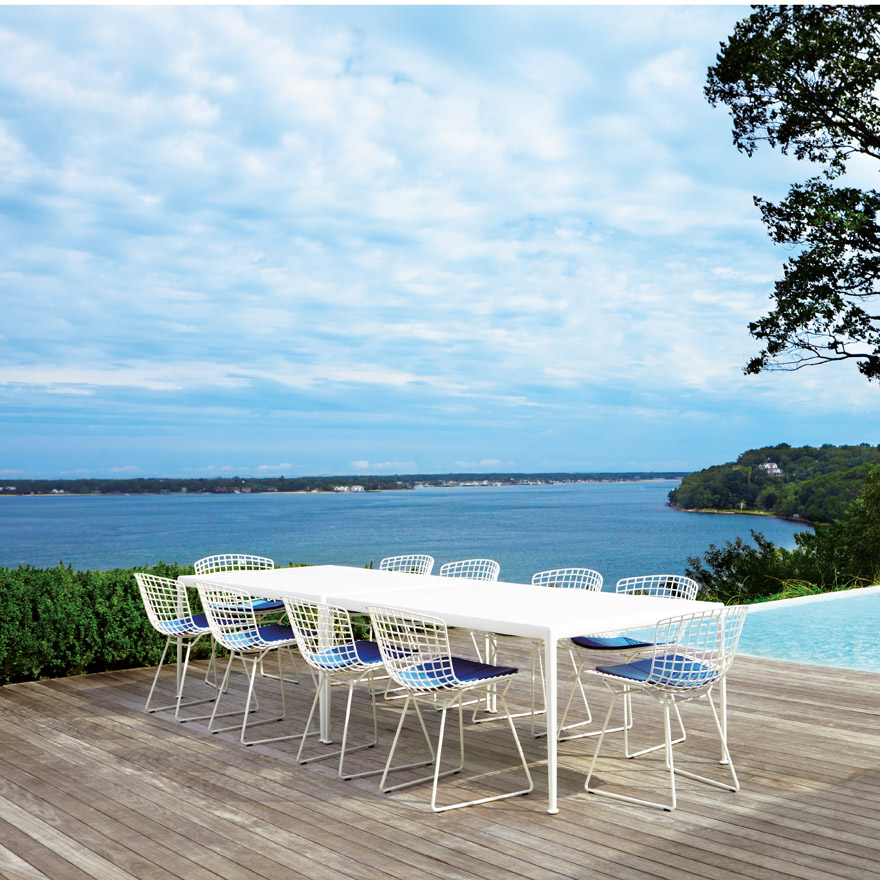 As a result, in 1952 the brand launched a set of lightweight outdoor chairs signed by Bertoia. Among them was the Diamond Chair, or model 421LU. It was fabricated from welded steel rods, curved and chromed or vinyl covered. Its shape responded to the human body. Something natural for Bertoia, who in the 1940s had collaborated with Ray and Charles Eames in the development of molded wood seats, and in the Naval Point Loma Electronics Laboratory, where he researched ergonomic design.

The Diamond Chair –and its variants, which formed the Bertoia Collection– became a sculptural and aerial classic.

The recognition of women in the field of modern design was scarce, however the Danish designer Nanna Ditzel (1923-2005) became a reference in the Nordic context. Ditzel was educated at the Danish School of Arts and Crafts and the Royal Danish Academy of Fine Arts in Copenhagen, where she graduated in 1946. The designer stood out for her polyester and fiberglass furniture from the late 1960s. Her work reveals an interest in creating comfortable, friendly objects.

No doubt her Hanging Egg Chair, created with her husband Jørgen Ditzel in 1959 is iconic. This chair made in rattan wraps around the sitter while swaying smoothly. 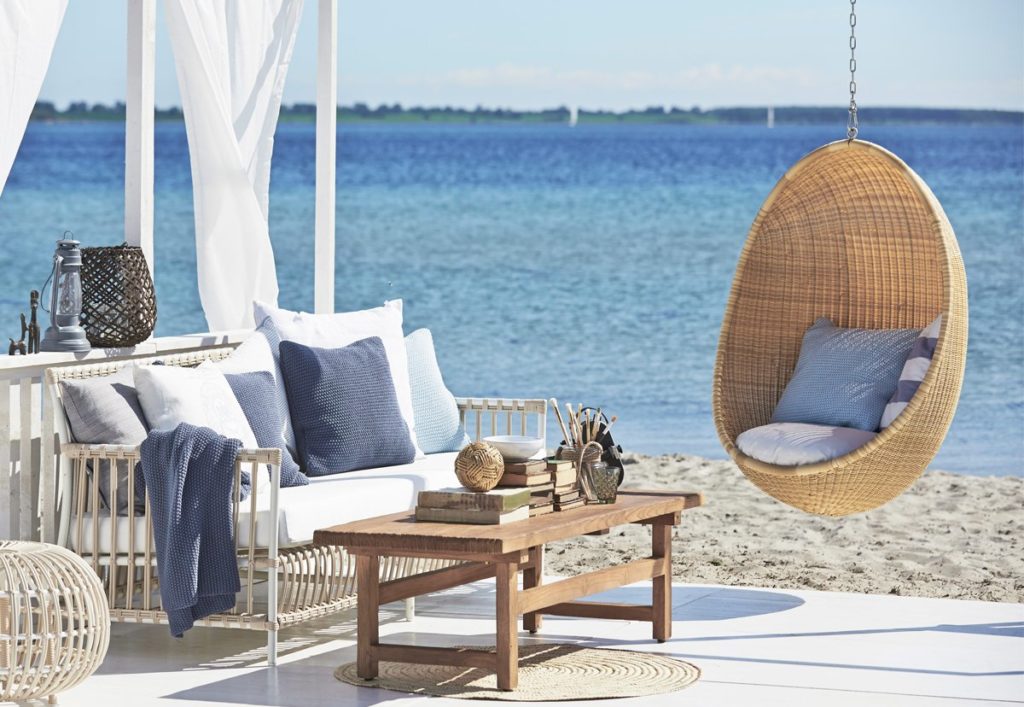 Nanna Ditzel had already designed other outdoor chairs using this material. This was the case with Rana, a three-legged chair launched eight years earlier in 1951. So was Chill, the first design she made after her husband’s passing away in 1961. Chill is an organically shaped low seat combined with a foot stool. Both are stackable. They convey a soft, calming feeling that characterizes all of Ditzel’s work. 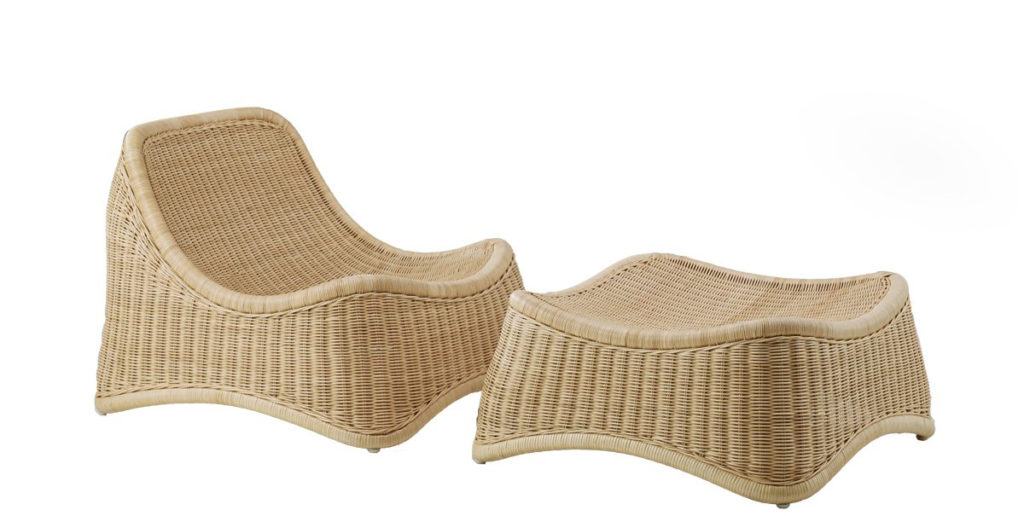 Lightweight, aerial and summery, the Acapulco chair is another great example among outdoor chairs. Its authorship is unknown. It was born next to the Acapulco cliff “La Quebrada”.

The 1950s saw the opening of the main road in the port of Acapulco, along with the Scenic Road, the first hotels and the international airport. As a result, the city became a fashionable tourist destination for the Jetset. John F. Kennedy and Jacqueline spent their honeymoon in the city and Elisabeth Taylor married Mike Todd there.

The Acapulco chair was introduced at one of the hotels at that time. Its author is unknown – although it is said that a French traveler might have attempted to design a more “ventilated” chair to handle the heatwave. It was commercialized by Don José Cortés since 1951. Its design was inspired by the Mayan technique to weave hammocks. Natural fibers, however, were replaced by vinyl rope. A lacquered steel structure was clad in these coloured ropes. The result was a very striking and comfortable chair. 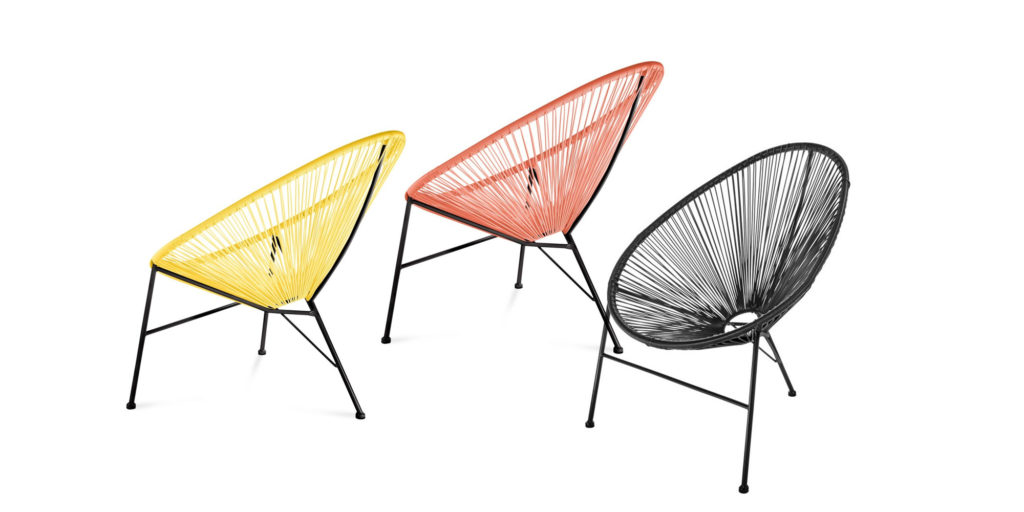 Cultures from across the Pacific were reflected in mid-century furniture design. Natural materials and a modernist simplification of forms brought lightness to traditionally inspired designs.

In the 1950s, Danny Ho Fong started a furniture business. It was based on traditional Chinese design and incorporated a California style. Tropi-Cal, now Fong Brothers, was the name of the firm. Danny Ho Fong and his son Miller Yee Fong designed numerous pieces made of rattan or wicker for the brand. Fong was an American born in China in 1915 who had moved to the California coast in 1936. His son Miller had been born in 1942 in Los Angeles and graduated as an architect. 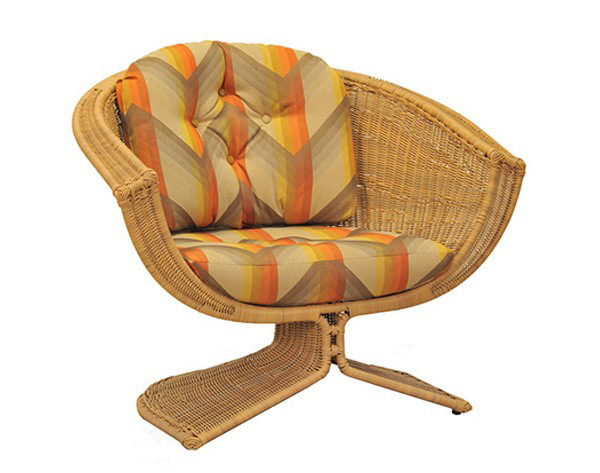 The chairs were made in Hong Kong. Some of them became museum collectibles. The Lotus Chair by Miller Yee, released in 1968, is now in the LACMA’s collection in Los Angeles. The Wave Chaise, designed by Danny Ho in 1966, is included in the MoMA’s collection in New York.

A pop spirit runs through the work of Gae Aulenti. This outdoor furniture set is colourful and versatile.

Gaetana Aulenti (1927-2012), better known as Gae Aulenti, graduated in architecture from the Politecnico di Milano in 1954. She was later part of the group of Italian architects who gathered around Casabella‘ s office between 1955 and 1965. As an architect, she designed the renovation of the Palace of Montjuïc to become the National Museum of Art of Catalonia in Barcelona.

Aulenti created several series of furniture throughout the 1960s for La Rinascente and later for Zanotta. In 1972 she participated in the exhibition Italy: The New Domestic Landscape curated by Emilio Ambasz at the MoMA. Her work had a pop spirit and a lighthearted style. She was part of the Neoliberty movement, which opposed Bauhaus rationalism. 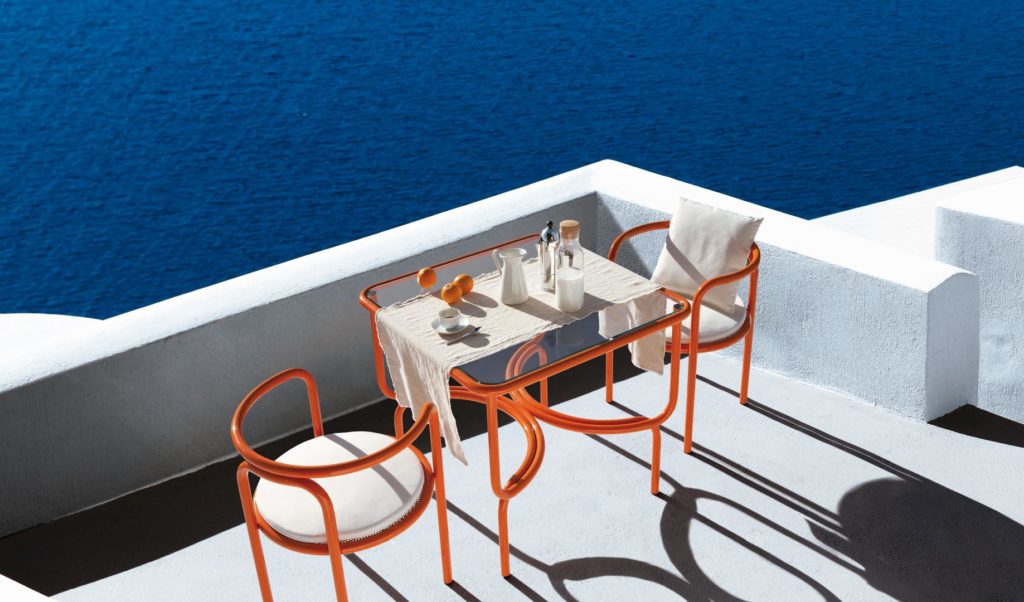 In 1964 she designed a cheerful set of outdoor furniture. She called it Locus Solus and it was originally designed for Centro Studi Poltronova. Consisting of a set of tables and chairs, it had many variants: bench, stool, table, chaiselong and an unforgettable rocking chair. All the units were symmetrical and painted in bright colours. Made of lacquered metal, sometimes included a playful upholstery. 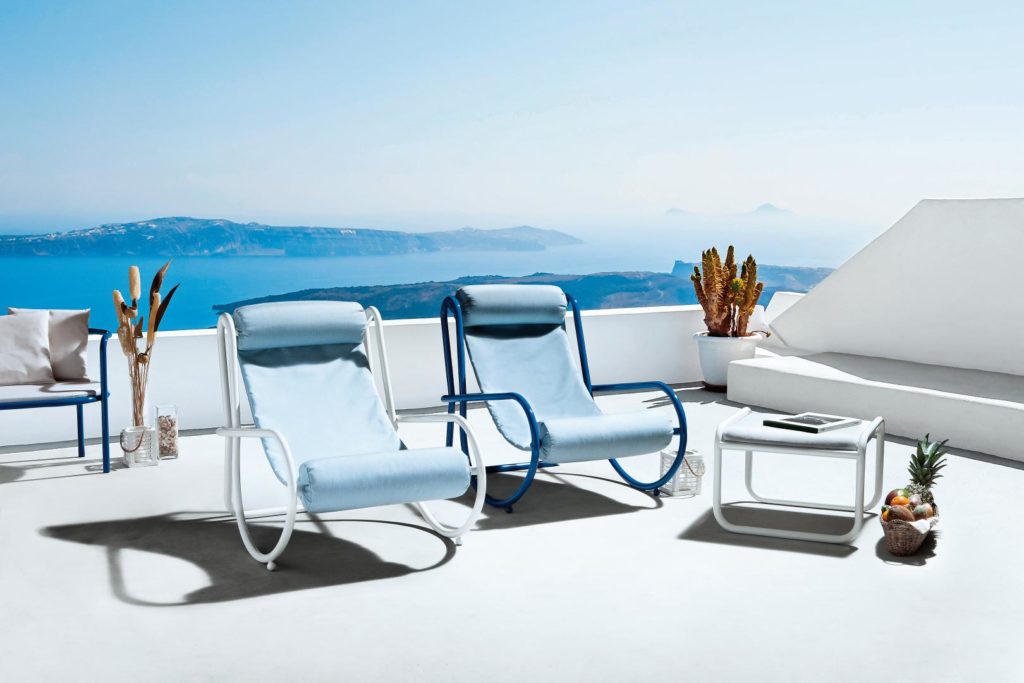