Wafra Living‘s design proposes an innovative housing organization in Kuwait, where block housing with common spaces was rare until ten years ago. Pablo Lopez, architect at AGi architects, tells us about this large-scale residential complex recently completed in Kuwait. One of the objectives of the project was to integrate the level of privacy typical of Arab culture into the collective residential typology. 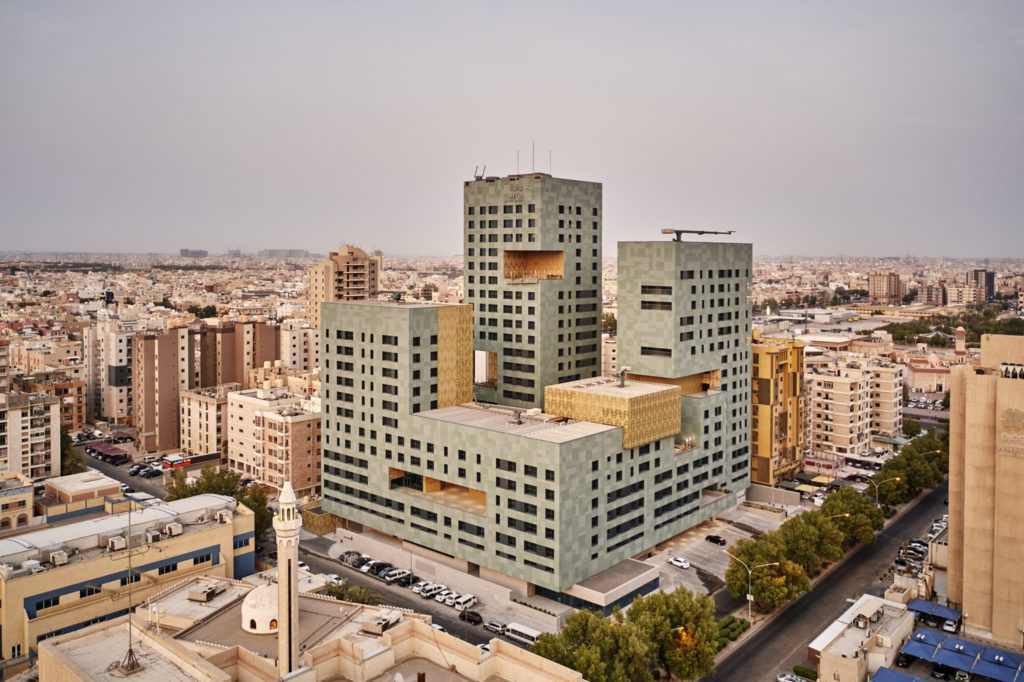 The modeling of the volume of the complex has been a major aspect of the design, what is your objective and how is this reflected in the interior spaces?

Wafra Living is designed as a high-rise building set back from the street, with an L-shaped building defining the edge of the plot. The latter has been conceived to maximize privacy within the community, while providing plenty of natural light to the interiors and common spaces. Cuts have been made in the front building to provide better views to the apartments on the first floors of the rear tower. The proposal combines at different levels domestic spaces and collective ones, private and public scales. While at the same time integrating into the urban fabric by assigning part of the first floor, where the pedestrian and vehicular accesses are located, to commercial-type public spaces.

At the +6.00 m level, a High Plaza has been created. This is a community area for the residents of the building to enjoy sports or any other leisure activity in a more private environment. A “veil” goes up the façade as an employable layer that hides the various service spaces within the apartments that do not directly relate to the public. It also houses the fire escapes, separated from the cores to be placed in this secondary circulation layer facing the inner courtyard of the complex. 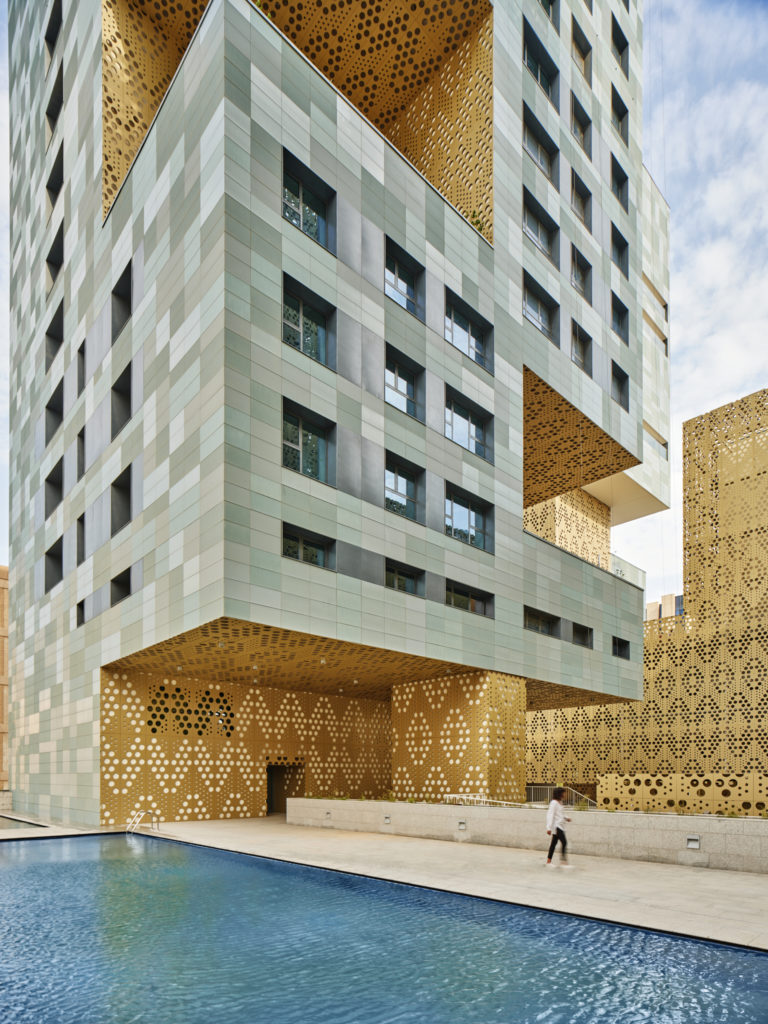 What major issues characterize a large-scale building like this, and how did you respond to them in the design of Wafra Living?

We felt that there were three issues that needed to be prioritized in the design of Wafra Living. The first was the large-scale, urban issue: the building had to respond to the urban form and signify itself within it. Secondly, the design of the dwellings was important: they had to be spacious, luminous and with an adequate level of privacy. Lastly, we wanted to generate a catalog of quality common spaces, which is precisely one of the characteristics offered by this type of residential model. 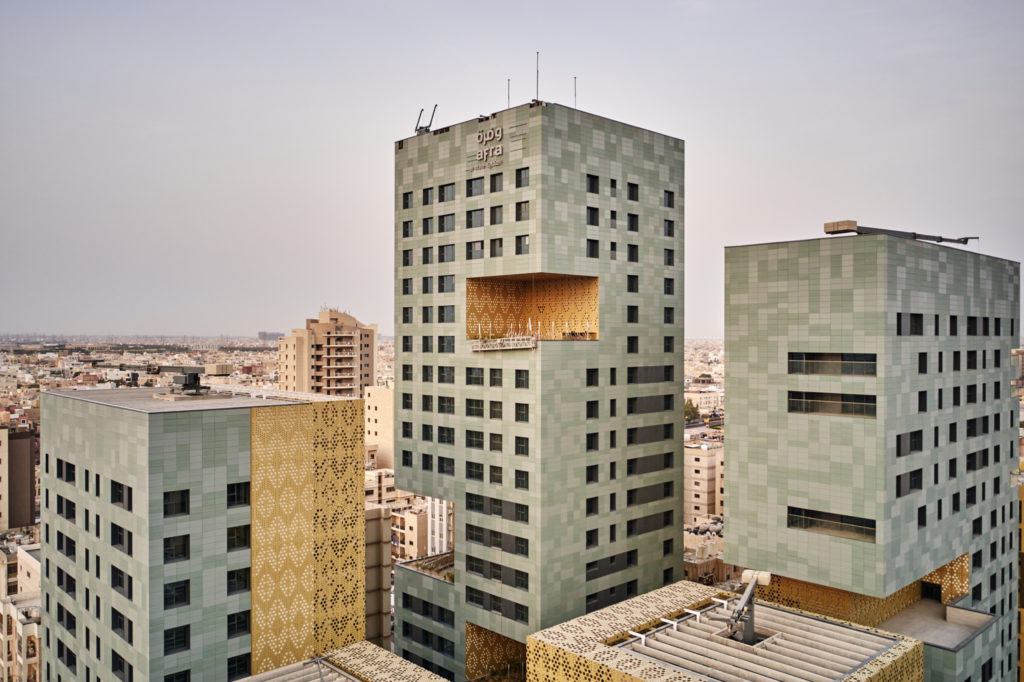 What characterizes the homes in the complex?

At Wafra Living we have designed three types of homes. Those in the L-shaped block have an average surface area of 150 to 210 m2 and overlook the street on one side and the large communal swimming pool area on the other. They are apartments with 2 to 4 main rooms, plus service areas.

On the upper floors of the block, we proposed a series of duplex and triplex apartments, of about 300 m2 and with four bedrooms. Finally, we proposed a series of dwellings located in the tower that overlook the common space. They are all corner dwellings, completely exterior and around 200m2. They have a more open configuration, with kitchens integrated into the living room. 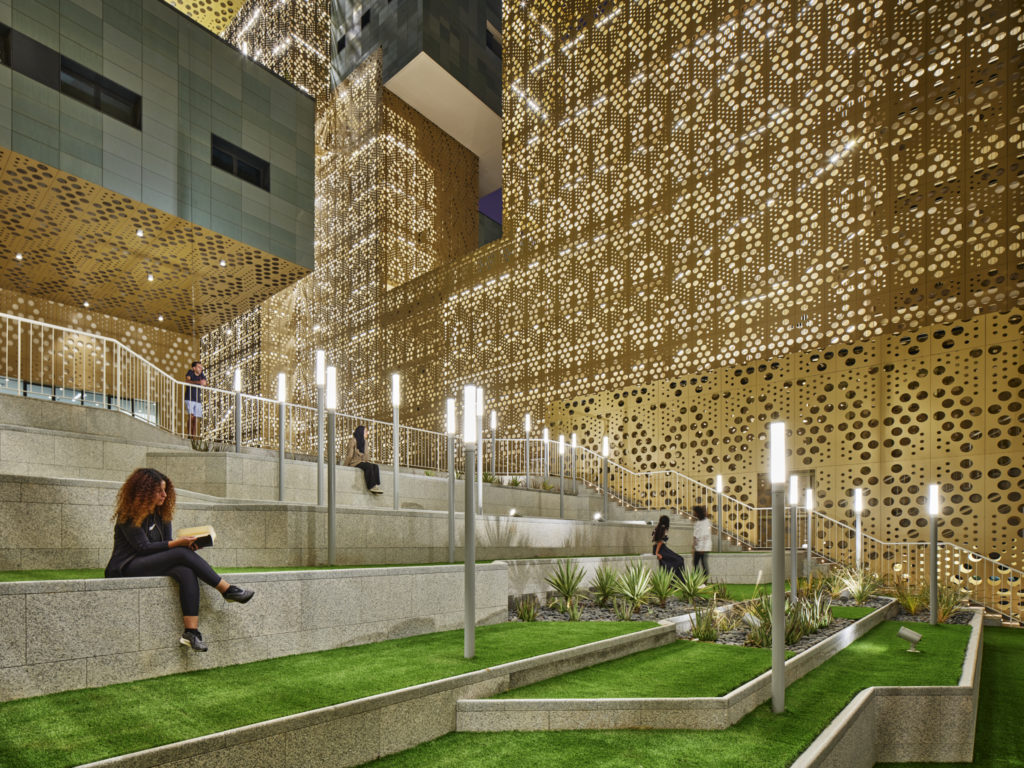 What kind of common spaces exist in Wafra Living?

Among the common spaces that we have designed for the complex is a large platform with swimming pools and sports courts, which is located in the High Plaza. Connected to that square are other common spaces such as the multipurpose room or the access to the community gym, which is done through walkways or terraced gardens. We have also planned a large hole that pierces the block. This is a children’s play area. In the volume that crowns one of the ends of the L-shaped block, you can find a squash court, which can be converted into a multifunctional space over time.

On the other hand, both in the tower and in the block, a series of large voids are cut out. In them are placed some diwaniyas, domestic spaces intended to receive visitors, which here are slightly modified in their function by becoming semi-public spaces. 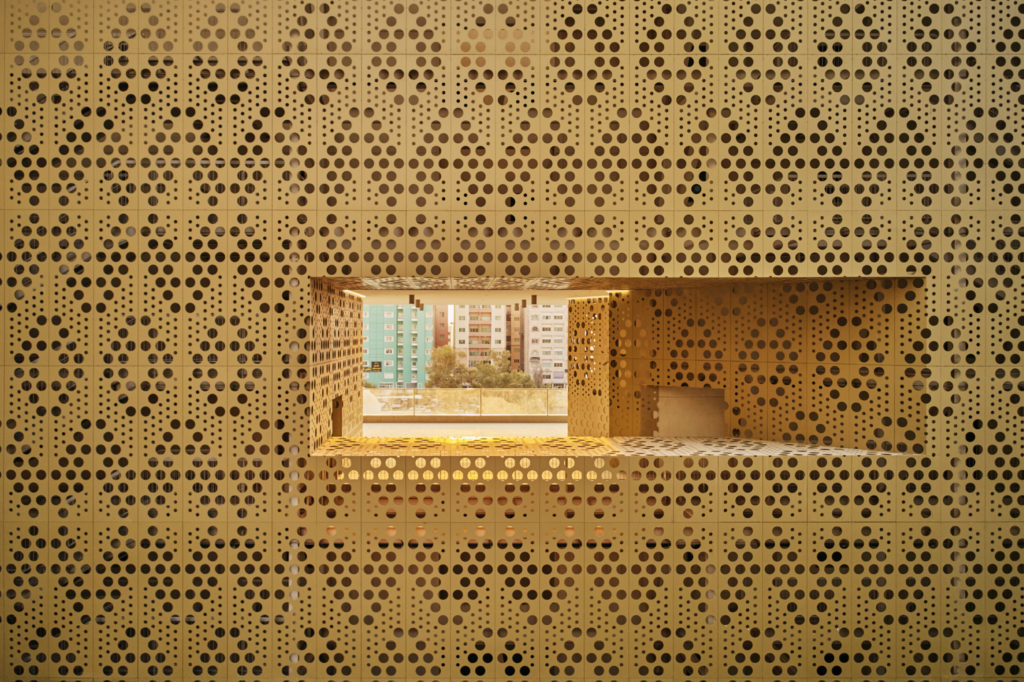 What are the issues behind the golden latticework that envelops the ensemble and gives Wafra Living so much character?

The golden lattice that wraps the building is a composite with an aluminum finish on its outer faces. It is perforated to allow ventilation and to give a geometric motif to the entire façade. We had to work hard with Alucoil to achieve an effective and viable design. The use of the lattice also allows to preserve the privacy of the rooms that overlook the common areas.