The international exhibition of Barcelona 1929 left for later times one of the most important works of modern architecture, the famous German pavilion signed by Mies van der Rohe and made in collaboration with the designer Lilly Reich. However, this was not the only work carried out by the German architect and the designer at the exhibition held in the city. In addition to the pavilion that represented Germany, they were also involved in the design of the German industrial sections that were part of the exhibition. In these sections, they experimented with spatial solutions and materials that characterize the work of both. In some cases, new ideas were born. These projects are very little known but are example of a global approach to a complex commission in a World Expo. 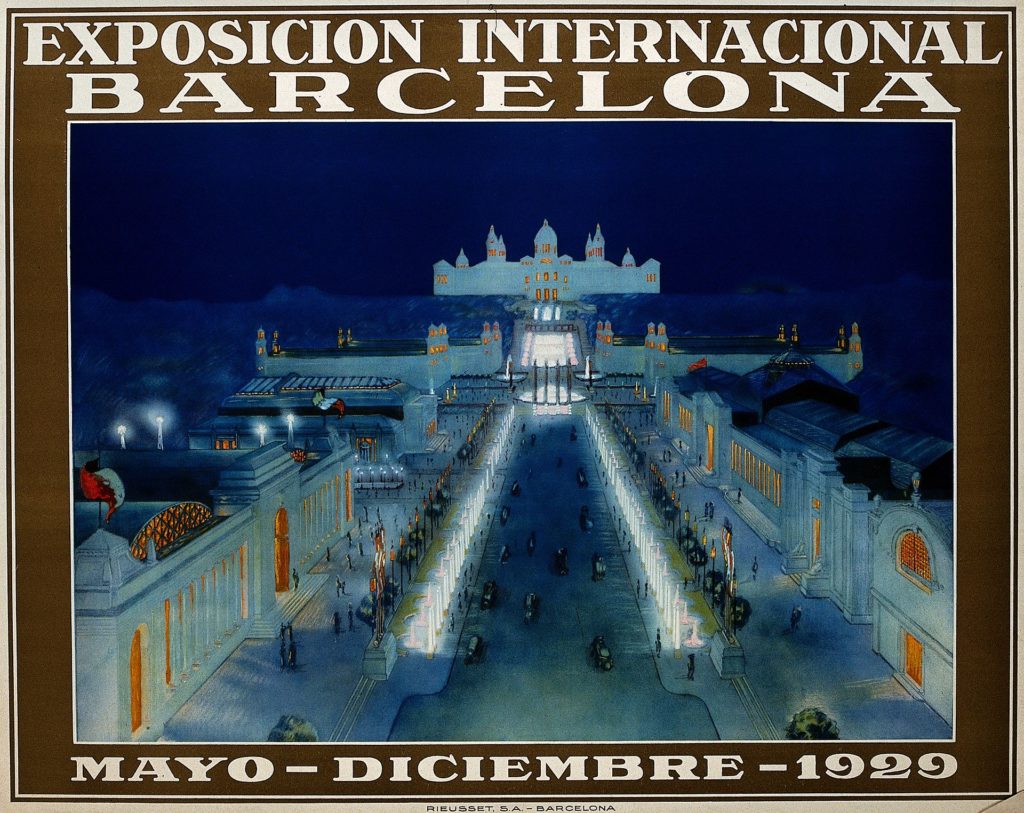 The event known as World Expo have its origin in France. In 1844, the French industrial exhibition in Paris inspired other nations to hold similar events, and finally to organize the first World Expo in London in 1851. It was housed inside the well-known Crystal Palace, a huge greenhouse made of removable iron and glass pieces.

The first examples of World Expo focused especially on presenting technological advances. In 1929, Barcelona would host an international exhibition, which had been in the making since 1905, promoted by the architect Josep Puig i Cadafalch. On the occasion of this exhibition, a large area at the foot of the mountain of Montjuïc was planned and developed. The result was a wide zone of monumental character and noucentista style, next to the current Plaza de España, which was inspired by the square of San Pedro of the Vatican of Bernini. A great avenue started there and ended in front of the magic fountain, near which, but far away, was the German Pavilion. 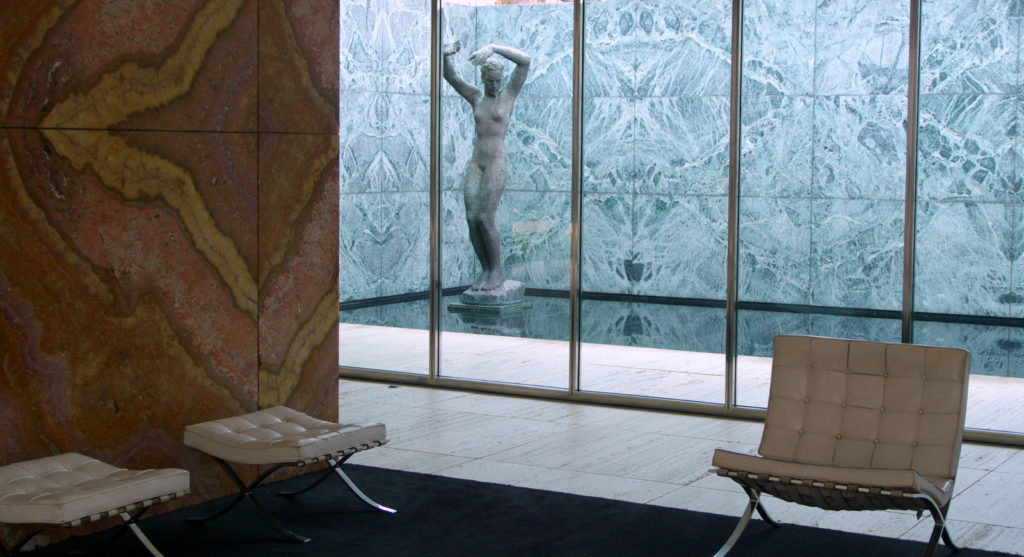 The building designed by Mies was demolished after the exhibition and reconstructed between 1985 and 1987 by the architects Cristian Cirici, Ignasi de Solà-Morales and Fernando Ramos. In it, the space was directed through undecorated walls. The materials themselves – fabrics, glass, polished metals and marble, as well as the sheet of water on the outside – would become ornaments.

For the same exhibition, Mies also designed the German Electrics Utilities pavilion, a project that has gone much more unnoticed. It is not clear whether Lilly Reich also contributed to the design of it, although it is known that Fritz Schüler collaborated on the project as an engineer. Similarly, it is not known to what extent Mies participated in the exhibition designs that were also commissioned to them and that occupied other palaces. These were used to exhibit products from various German industries. In relation to this aspect, architectural critics Matilda McQuaid and Sonja Günther have considered that the exhibition areas were mainly developed by Reich and that Mies only participated in the design of the displays dedicated to Hackerbräu beer, German textiles and chemicals.

The German Electrics Utilities pavilion was located on the Plaza de la Luz, between the Communications and Transport and Textile Art Palaces, next to the Plaza de España. It was the last building built in brick by the German architect. Its floor plan was practically square, 20 by 20 meters on each side, showing an almost cubic volume, painted in white, with a large opening for access. 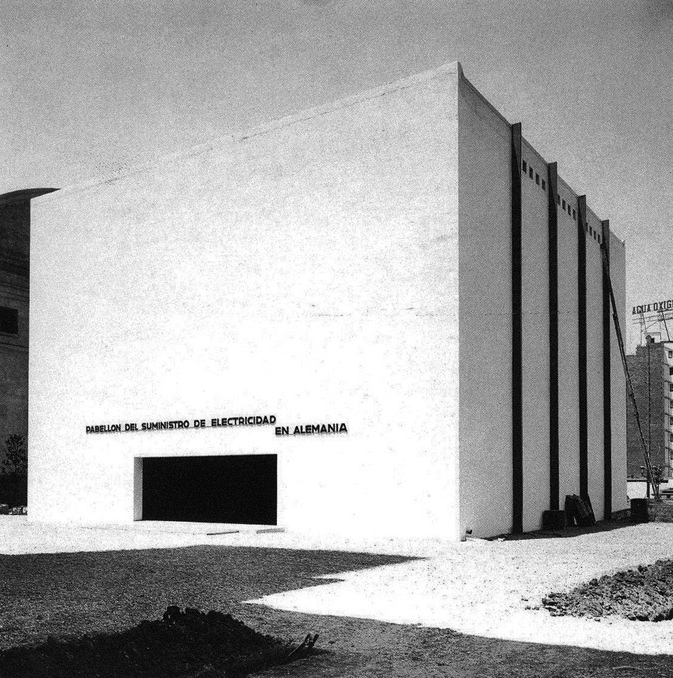 In the interior of the building, the open and undivided space was characterised by a linoleum floor (a modern material at the time), and walls covered with photographs. They were probably printed on a textile that lined all the walls, including the ceiling. Thus, the interior showed a large landscape surrounding the entire perimeter built in the form of a photographic collage. It showed the architecture of the power plants. Note that this was the moment of the New Objectivity approach to photography, which tried to find the most precise and least expressionist side of the camera’s possibilities.

On the outside, the structure became visible when it appeared out of the exterior white-plastered brick enclosure, thus distinguishing the facade structure as Mies would do in future projects. In this way, the Electrical Supply Pavilion was configured as an opposite to the German Pavilion. In contrast to the semi-open, semi-closed, fluid space of the German pavilion, the space of the Electrics Utilities pavilion was closed, focused on the interior. Illuminated by artificial light, it sought to create a large artificial image, a large-scale photographic landscape around its entire perimeter.

On the other hand, there were the exhibition projects that Lilly Reich and Mies van der Rohe carried out in Barcelona. Lilly Reich was especially specialized in shop window and exhibition design, and Mies had also carried out numerous projects in this field. Despite being on a smaller scale, these projects are undoubtedly significant. In those carried out in Barcelona, the proposals that both made were characterized by a series of common architectural decisions. Thus, the different interventions shared the selection of the furniture and the design of the display cases. The two collaborators took the decision to unify the furniture sets, all of them made from metallic tubes, with chairs, armchairs, stools and MR-type tables produced by the Berliner Metallgewerbe. In addition to the furniture, the coordinated design of the signs became a hallmark of the German sections.

Among the different exhibition designs they produced, the Deutsche Seide exhibition in the Silk and Velvet section of the Palace of Textile Arts had the greatest media impact. Both were already experienced in showing this material, as together they had already held the well-known exhibition Cafe Samt & Seide in Berlin in 1927. On this other occasion, in Barcelona, they proposed an area delimited in the Palace of Textile Arts by a series of wall showcases with white panels for the display of the fabric samples. These created a background for the exempted textiles that were displayed in the central area. The perimeter showcases also contained other similar fabrics inside. In the centre of the stand, the textiles were displayed hanging from independent bars, arranged before a series of glass panes framed in chrome-plated carpentry. The glass was coloured in different shades. One of them took on a semicircular shape, a shape shared by other projects carried out by the German architect.

The set of designs for the German industrial exhibitions at the Barcelona exhibition show the spatial and material mastery that Reich and van der Rohe had of the exhibition space. Their use of showcases and textile surfaces to create spaces that would contain the exhibition spaces, the use of furniture and signage to generate a common identity, and the capacity to create a modern and enveloping image through photography and through the materials exhibited make these projects into fundamental proposals of an emerging discipline: exhibition design and exhibition pavilion architecture.

The renowned German Pavilion was the culmination of many of Mies van der Rohe’s investigations and one of the first and most important examples of modern style in Spain. The different projects that Mies and Reich carried out in Barcelona within the scope of the international exhibition show that other smaller-scale but highly interesting projects took place at the same time. On the other hand, they show the convergence between industry, state and architecture that was taking place at that time in Weimar Germany. This was reflected in the artistic and architectural creations that appeared in contexts such as the Bauhaus.