In the last blog article, we examined the emergence of the modern kitchen. In the seventies and eighties, two cultural events contributed to the current understanding of the cooking space. We address them in the following post: kitchen as possibility and the kitchen for cooking.

During the first half of the 20th century, the fundamental concepts of modern domestic space emerged. One of them was the efficient, rationalized and hygienic kitchen that resulted from the application of scientific principles to housework. In the following decades, other ideas were put forward in order to define kitchen furniture and space. New lifestyles and other family types linked the kitchen to pleasure and to new urban and globalized life.

Stackable domestic utensils moulded in plastic, armchairs with sinuous shapes, folding and stackable chairs, kitsch references to popular culture, furnishing modules… All of this starred in this seminal exhibition held at the Museum of Modern Art in New York in 1972.

At that time, Italy was one of the main protagonists of international design and architecture. La Tendenza, an architectural group of which Aldo Rossi, Giuseppe Samonà, Giorgio Grassi, Massimo Scolari, Ezio Bonfanti and Carlo Aymonino were members, was one of the leading figures of the time. Rossi, Grassi and their colleagues, opposing to pop architecture and high tech, extended neo-rationalist concepts that connected with modern Italian architecture of the 1920s and 1930s.

But other people in Italy understood architecture and design from different perspectives. Pop, Kitsch or counterculture were on the table in the Italian scene of the moment. The exhibition Italy. The New Domestic Landscape collected these ideas and linked them conceptually. It was one of the most important exhibitions of the decade. Its curator was Emilio Ambasz, Argentine architect and professor born in 1943, working at the Department of Architecture and Design of the MoMA.

In the exhibition catalogue, the Argentine architect identified three attitudes in the designers at the exhibition. Firstly, that of the conformists, who dealt with design from a formal and technical point of view. Secondly, he spoke of reformist attitudes that believed in the link between design and society. These designers worked with irony, industrial elements and had broken with the modern slogan of form following function. Facing these attitudes, there was also a third way. Such a tendency led to the abandonment of the creation of objects or to their critical insertion into socio-cultural systems. 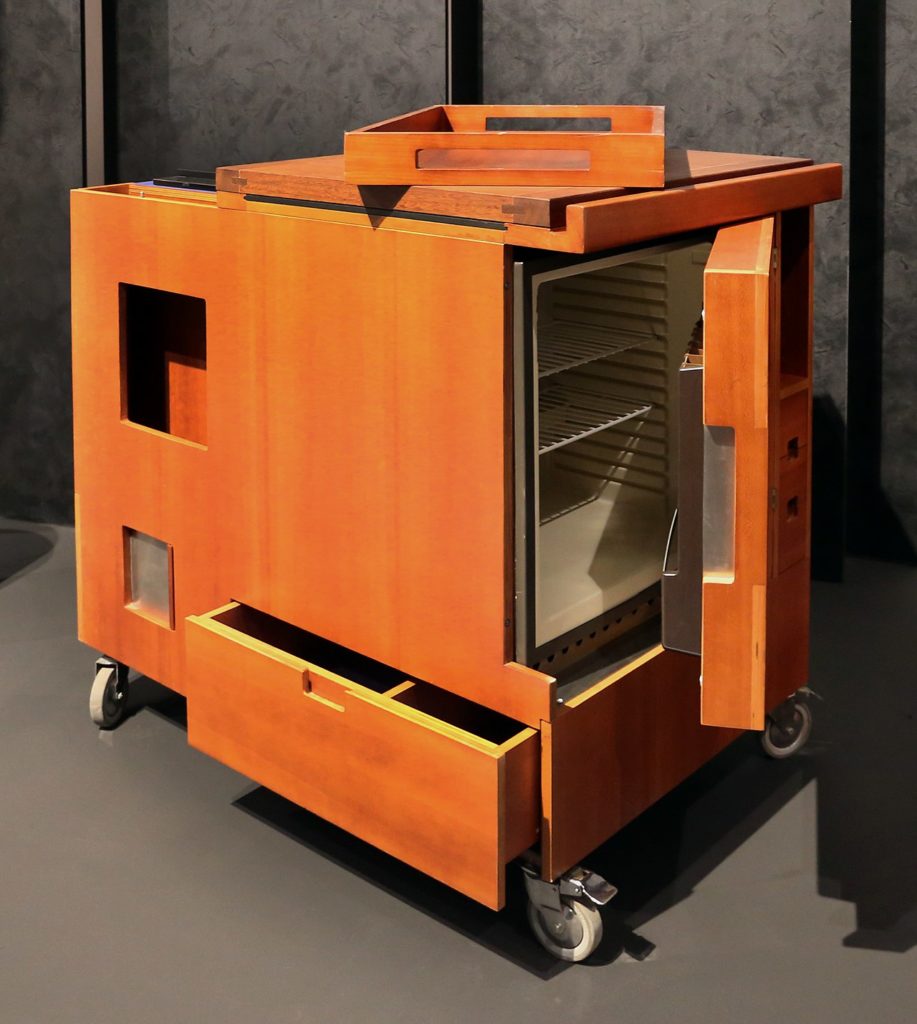 Italy The New Domestic Landscape presented iconic creations at the MoMA. In relation to the kitchen space, it showed tableware or cutlery systems with ergonomic or stackable shapes, often made of plastic.

It also showed new insights into this domestic function. Joe Colombo’s kitchen trolley produced for Boffi in 1963 was significant. It was a mobile and compact device for cooking. It reflected an understanding of architecture as a programmable and adaptable space.

“Things have to be flexible. My kitchen can be moved around or out of a room and when you are finished with it, it closes up like a box”, Colombo said of his Minikitchen.

Similar architectural examples were presented at the show, such as the folding kitchen by Ufficio Tecnico Snaidero, or Giancarlo Iliprandi’s Archipielago kitchen unit.

This same idea of architecture as equipment was also present in the futuristic proposal of Ettore Sottsass, again a modular system designed to be installed in any space. And also, in a more radical way, Superstudio proposed a living space that responded to a society without work and without social hierarchies. New forms, colours and materials, but also the emergence of a hierarchically free and globalized habitat left an indelible mark on subsequent understandings of the kitchen space.

In 1980, the important kitchen brand Bulthaup contacted the German designer Otl Aicher for a collaboration. Aicher developed the idea of the kitchen for cooking. He was a graphic designer and typographer. As a pioneer of corporate design, one of the most significant examples of his work was the development of Braun’s brand identity.

Aicher had co-founded the influential Ulm School of Design in 1953, along with his wife, writer and pacifist Inge Scholl, and architect and artist Max Bill. It was probably the most influential educational project for industrial design.

In Ulm, Aicher came into contact with the visions of teacher Hans Gugelot and industrialist Erwin Braun regarding the design of household appliances. When Braun took over the management of his company after the death of his father, he sought advice in Ulm. From then on, Hans Gugelot and Otl Aicher collaborated with the brand team. 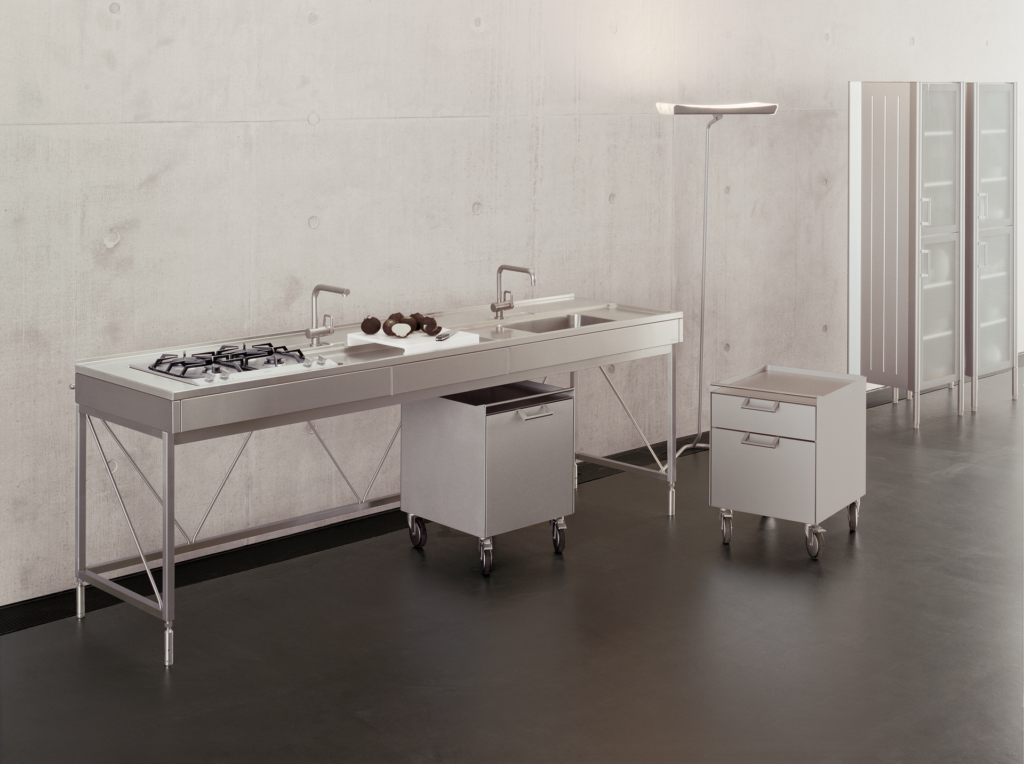 Another significant designer with whom Aicher had contact was Nick Roericht. First a student and then a teacher in Ulm, Roericht collaborated with Aicher in the School and in the commission for the Munich Olympics, where Roericht designed the seats and furniture for the Olympic Village and Aicher the complete graphic identity for the Games. However, Roericht’s best-known design is probably a set of stackable tableware that has made history.

From this extensive experience Aicher approached the collaboration with the leading German kitchen company Bulthaup. The designer carried out an in-depth study of the various kitchen trends. He understood that this space had to be the opposite of an efficient and rationalized kitchen. He found the truth of the act of eating in the previous activity of preparing food. He valued cooking culturally and socially. And he gave importance to all the utensils and tools that cooking implies: without them, food would be something else.

The kitchen for cooking, the book published by Aicher, became an influential manifesto, which was reflected in the collaboration with Bulthaup. The kitchen manufacturer introduced to the market a kitchen workbench signed by Aicher in 1984, while at the same time adopting a new logo from the hand of the German designer.

This idea of the kitchen for cooking restored the communicative and community values of this space. It also led to the connection of the kitchen to the living room, the incorporation of elements from the restaurant sphere and the revitalisation of the central kitchen area through the use of a classic kitchen table or an insular work area.