With the advent of electricity in homes, lighting changed and modern lamps became uniquely important in the home. Functional devices but at the same time light sculptures, we travel through the 20th century through 10 lamps that never lost their validity. 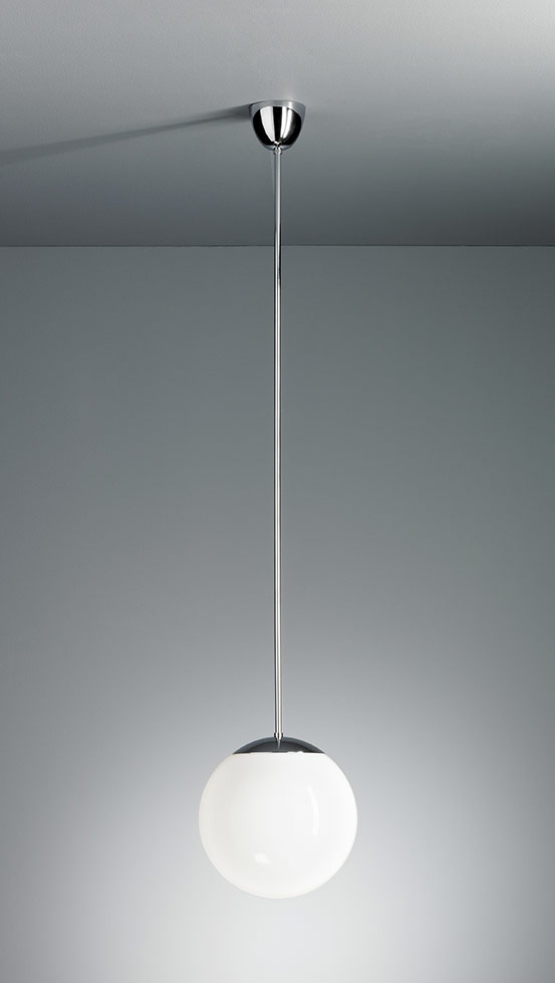 The HL99 ceiling lamp was one of the first modern lamps to operate with electric bulbs. During the 1920s and 1930s, this lamp was installed in numerous schools and offices, and renowned architects such as Peter Behrens, Adolf Loos and Josef Hoffmann used it in their interiors. The HL900 lamp is characterised by its opal glass sphere that hangs from a chrome tube like a celestial body. The design shows a formal purity typical of the emerging modern style.

The authorship of this design is unknown. Other luminaires of similar design were conceived at this time. The lamps designed by Marianne Brandt or Hans Przyrembel in the context of the Bauhaus are a good example of this. 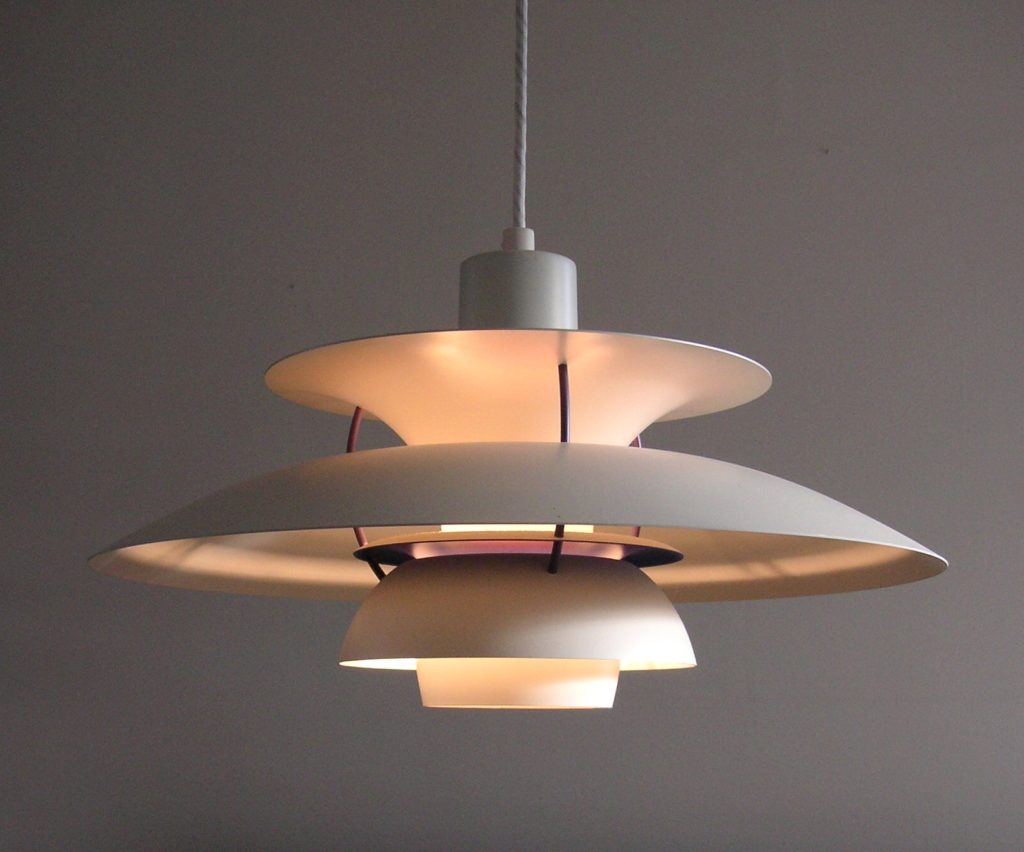 One of modern lamps par excellence, the PH pendant luminaire designed by the Dane Poul Henningsen for Louis Poulsen’s lamp company had to be in this list.

The prototype of the first PH lamp was manufactured by Poul Henningsen in 1924 after almost ten years of experimentation. Henningsen’s aim was to give electric light the warmth of gas lamps. The lamp was presented in the exhibition of Decorative Arts of Paris in 1924 and began to be sold in 1926. From then on, the manufacturer Louis Poulsen launched a large number of PH models: table lamps, bedside table lamps, floor lamps… Henningsen’s design excellently represented the spirit of Nordic design. It combined formal clarity and functional efficiency, with an aesthetic delicacy that reflected the concern for connecting furniture with life.

PH lamps are composed of multiple concentric screens whose function is to eliminate visual glare. In addition, these screens allow the creation of different shades of light. The result is a lamp that continues to give a welcoming appearance to any space.

Without doubt the first decades of the 20th century were key for design experimentation with new objects that incorporated electricity. The Tube Light floor lamp was designed in 1927 by the designer and architect Eileen Gray. The lamp consists of a simple fluorescent tube supported by a chrome-plated metal stem with black plastic sleeves.

Eileen Gray was one of the first internationally recognised women in the field of industrial design, although her acknowledgement was slow to come due to her womanhood. Born in Ireland, she lived in different cities such as Paris and London, and earned a reputation as the first European artist of the 20th century to adapt traditional Asian techniques on the use of lacquer in design. Eileen Gray also did work in the context of architecture, with projects such as the very modern House E 1027, which she designed with her partner Jean Badovici. Located in Roquebrune, near Monaco, on a cliff near the sea, the house is an example of modernity. 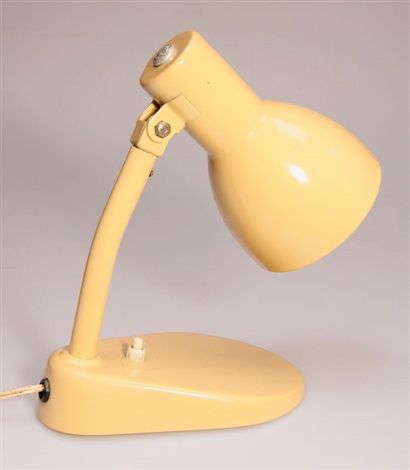 Marianne Brandt, author, as we have seen, of one of the spherical modern lamps similar to the HL99, was a German industrial designer who was trained between 1923 and 1928 at the Bauhaus. She stood out at the school for her skills, and was allowed to attend the metal workshop, being the first woman to do so – at that time, many specializations were forbidden to women. Such was her aptitude, that in 1928 – 1929 she ran the metal workshop. Many designs emerged from Brandt’s work, among them the Kandem table lamp, designed in 1928.

This practical and functional design, which reminds us of many of the lamps in our daily lives, reflects the functional and aesthetic values of the German school. Functionality and industrial production characterise it, as does a formal simplicity typical of the Modern Style that the Bauhaus helped to give rise to. 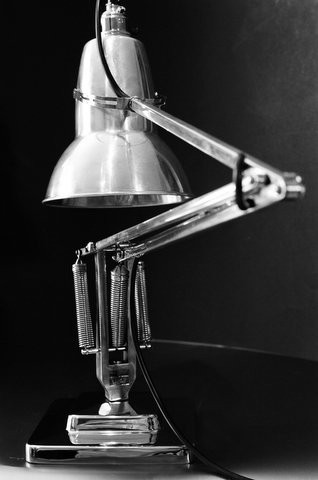 If Brandt’s lamp reminds us of many of the modern lamps in our lives, among table lamps the iconic Luxo L-1 stands out. Designed by Norwegian architect Jacob Jacobsen in 1937, it has been called “architect’s lamp”. It is perfect for the workplace because of its articulating and light-guiding possibilities. Its design scheme is based in turn on the articulated arm of the Anglepoise lamp developed by the British George Carwardine in 1933, which was inspired by the size and function of the human arm.

The Luxo L-1 inspired the famous Pixar Luxo Jr. character, which in turn comes from the design of the company’s corporate logo. 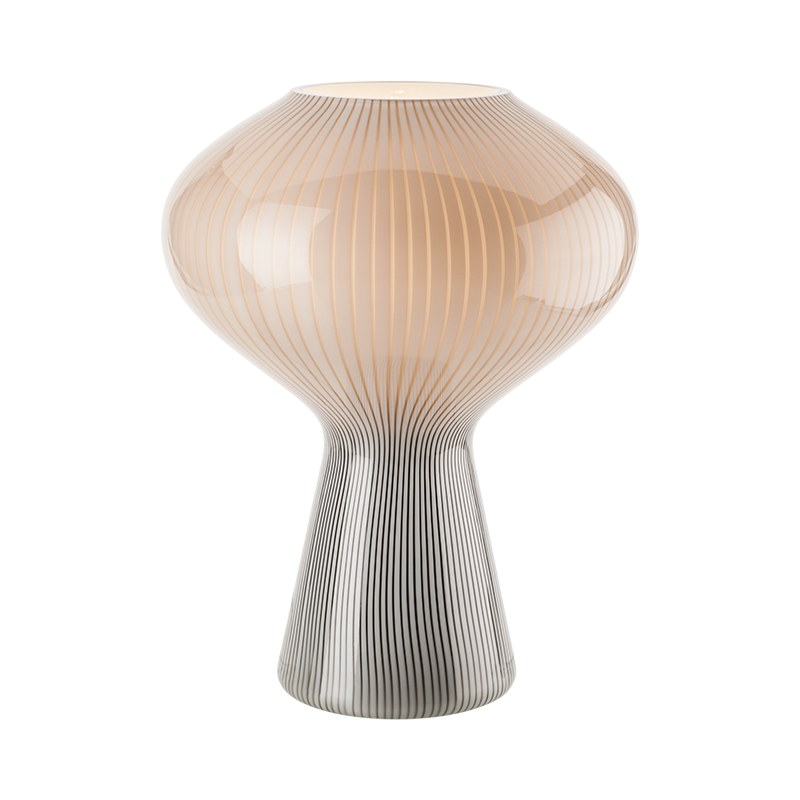 The cheerful and hedonistic character of much Italian design, typical as well of mid-20th century’s spirit, is perfectly visible in the Fungo table lamp, which was conceived for Venini in 1950.

Made of blown glass from Murano, its iconic mushroom shape and delicate white stripes are combined with a very wide range of colours. This encourages the arrangement of the lamp in pairs or groups of three to enhance its beauty. The modernity of a continuous and formally clear finish is combined with the organicist trends of the moment in this unforgettable design that reminds of mushrooms and reminds us of a magical landscape.

The Cappellin Venini y C. glass factory was founded in 1921 by Paolo Venini -a lawyer from Milan- and Giacomo Cappellin -an antique dealer from Venice-, on the Venetian island of Murano. From the beginning, the firm was interested in incorporating design professionals. In addition to innovating in the production of blown glass, Venini collaborated with renowned Italian architects such as Carlo Scarpa, Gio Ponti and Ettore Sottsass. 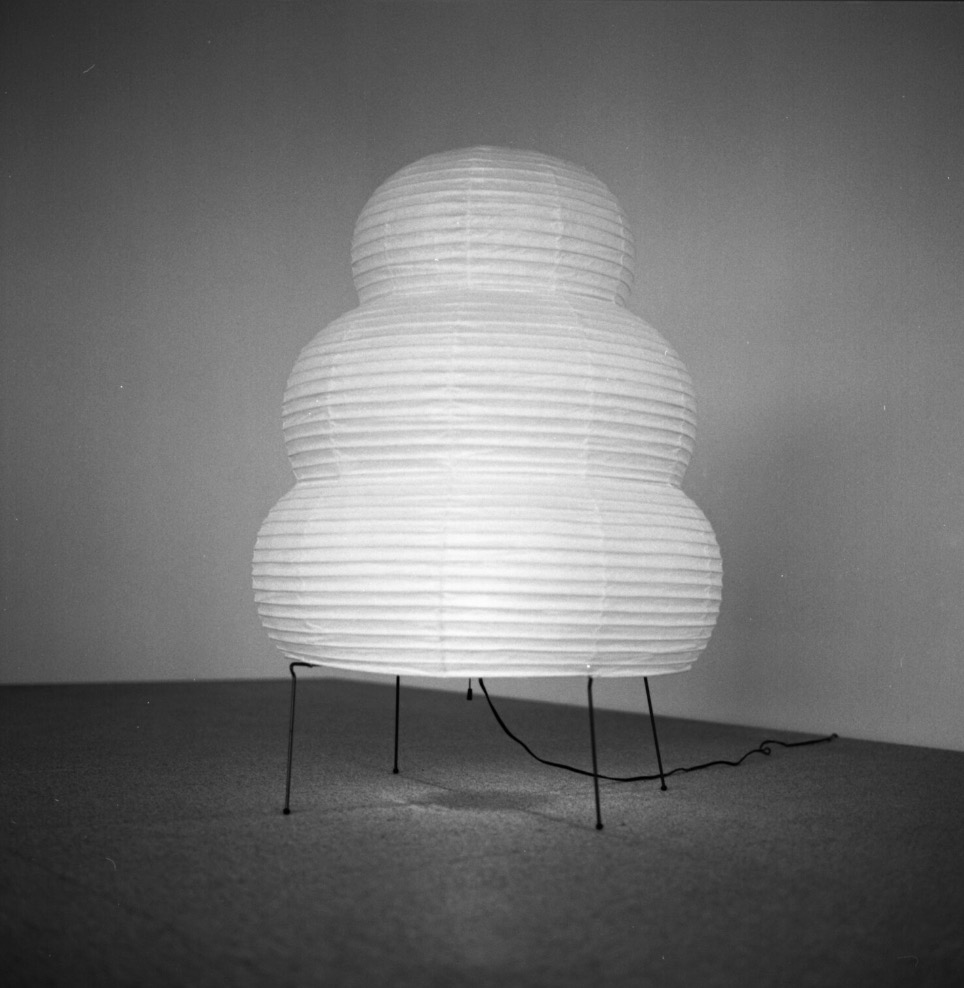 In contrast to the cheerful explosion of Murano lamps, Isamu Noguchi’s Akari light sculptures, also linked to craftsmanship, have a serene delicacy. This series of lamps are handmade from traditional washi paper and bamboo canes by Japanese craftsmen. “The hardness of electricity is thus transformed through the magic of the paper, returning to the light of our origin – the sun,” Noguchi himself said of them. Their name, “akari”, means “light” and “lightweight”.

The famous Japanese-American sculptor, Isamu Noguchi, was traveling in the city of Gifu in Japan in 1951. He was amazed by the lanterns used by night fishermen on the Nagara River. Noguchi stayed and learned the traditional Gifu method of paper construction, and eventually created his lamps. Today, each Akari light sculpture is meticulously handcrafted at the Ozeki workshop, a traditional family business based in Gifu, and there are more than a hundred designs. 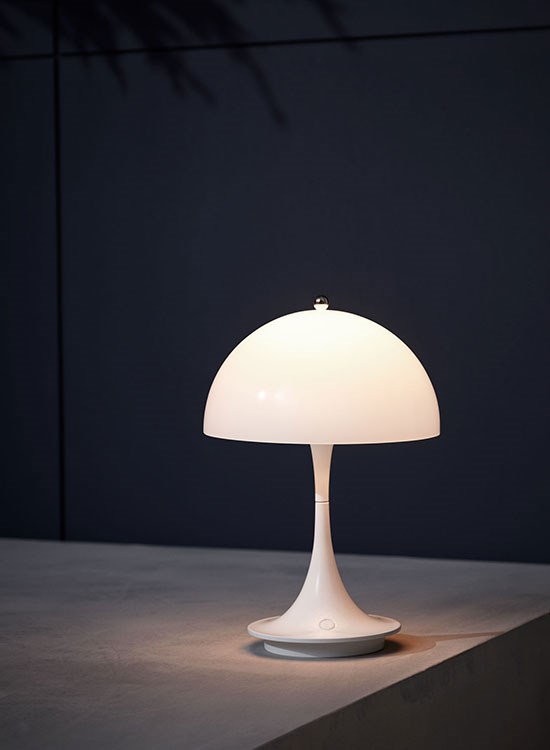 The legendary designer Verner Panton presented his design for this lamp in the early 1970s: Panthella. Available in both floor and table versions, this cheerful design with a strong pop influence is a perfect representation of the moment it was designed.

The basic principle of the lamp was that both the foot and the shade acted as reflectors. The light source is hidden under a milky white hemispherical acrylic shade. The white trumpet-shaped base contributes to a beautiful distribution of light.

Panton was one of the most influential furniture designers of the late 20th century. Panton, who designed several luminaires for Louis Poulsen, was interested in new mid-century materials such as acrylic, foam, plastic and glass-fibre reinforced polyester, and with them defined playful forms with strong colours and shiny surfaces. 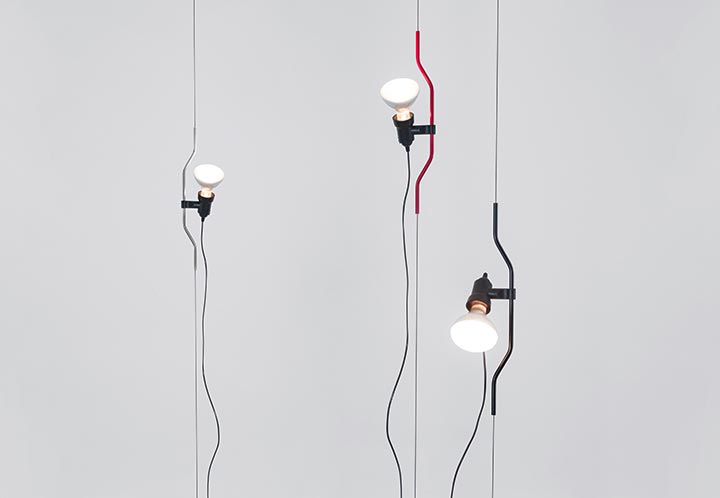 “The first idea for the ‘Parenthesis’ lamp came from Pio Manzù, who had thought of a vertical fixed pole and a cylindrical box with a slot for the light, which moved up and down: a screw was needed to fix it. I replaced the pole with a metal cord which, when deflected, acts as a friction device and allows the lamp to remain in the correct position without the need for any screws”. These words by Achille Castiglioni, who designed the luminaire together with “Pio Manzù”, sum up the concept of this beautiful, light and practical lamp which won the “Compasso d’Oro” in 1979.

Parentesi does not take up any space. Its components are minimal. In 1970, it was presented in a kit created by Castiglioni containing all the easily assembled parts of the lamp. Vacuum-packed in a white base casing that fitted perfectly into the transparent top casing, it had, like the lamp itself, a handle on the top allowing easy and comfortable transport. 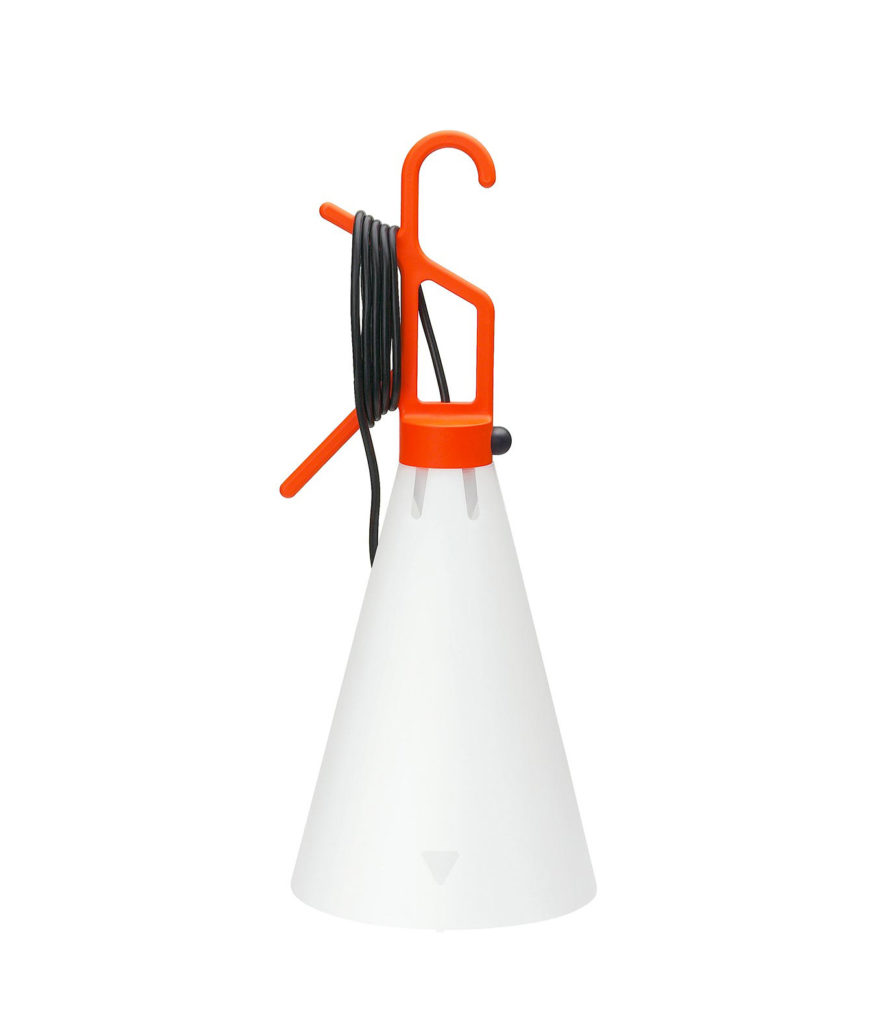 May Day. Image via Flos.

In 1999, industrial designer Konstantin Grcic developed the May Day lamp for Flos. This piece, clearly with a utilitarian image, reflects the flexible and changing spirit of the turn of the century. The lamp is transportable and can be easily moved and adapted to the activity being carried out. It weighs only 700 grams, its cable of almost 5 meters can be rolled up at the top, and it is also designed to be hung anywhere.