Ten competitions per year, in locations as different as Saudi Arabia, Norway, or rural areas of Galicia, but with a special focus on public, cultural and educational programs. New buildings and also interventions in historical contexts, but with emphasis on the rehabilitation of existing buildings. At AGi architects we have opted for the development of competitions as a research platform that allows us to investigate and apply new concepts that can have a place both in Spain and in the Middle East.

«Competitions are research processes that allow us to approach a project from much more open perspectives than direct commissions, which are often determined by more functional and traditional parameters. They also give us the possibility of launching specific or even hypothetical lines of work that allow us to go one step ahead», says Joaquín Pérez-Goicoechea, co-founding partner of AGi architects.

A modern art museum, a cultural center in an old factory and a health center with a wooden facade: these are three of the projects completed in recent months that we had not yet shared. We took the opportunity to reflect with Joaquín Pérez-Goicoechea and the team in charge of the competition department, formed by Lucía Azurmendi and Laura Guinea, on how this work is approached in the office.

When it comes to planning, the team is constant in its concerns. Lucía Azurmendi points out how they always look for the project to respond appropriately to the environment. «We are concerned about the participation that buildings can have in their context, and how they shape the city. Buildings endure over time, and society and cities change, and so does the way we live in them. Therefore, we try to ensure that there is the possibility of adaptation and flexibility. We do not want to condition existing buildings to requirements that may be transient. But at the same time we are interested in boosting programs and making the buildings part of present-day life. We detect surrounding assets so that our proposals dialogue with them and emphasize existing strengths».

Part of the work is devoted to existing buildings that are to be rehabilitated. They are adapted to contemporary uses, as was the case with our proposal for the extension of the Burgos Municipal Archives, which won the competition.

Lucía Azurmendi points out how the team invests «a lot of time in researching the site, in order to be able to intervene with the greatest possible respect. Heritage must always be the protagonist and the driving force of the project. The built space is very complex, the result of the sum of different layers: social, cultural, urban, infrastructural, historical… It is our responsibility to understand this complexity and mediate with it.

One of the biggest challenges is to adapt programs, new ways of living or regulations to old buildings. New program requirements could transgress the identity of the building or the place».

Rehabilitation of Torrelavega’s sugar mill as a cultural center

The project for the Torrelavega sugar mill complex is based on a reflection on its cultural identity. We sought to maintain and reinforce the original industrial character of the complex, adding value to it. Therefore, the main focus of the project was to clarify and preserve the existing architecture. Consequently, the demolition of the elements that had been added later, which hindered its understanding, was projected.

An adaptation of the site was also proposed. The intervention focused on activating the large esplanade in front of the main building. In addition, we wanted to isolate the complex from the road and connect it with the greenway. The outdoor space was organized into four squares to receive the public, host events and hold outdoor activities. 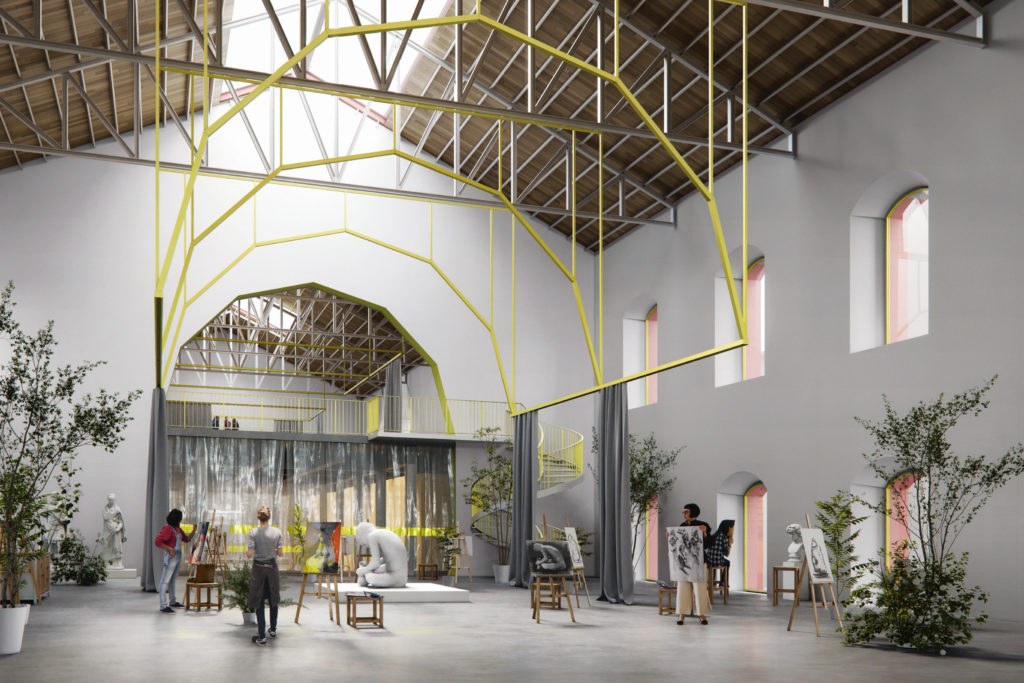 In addition, we housed the program with more complex needs in new buildings. The materiality of these new architectures dialogued with the historic complex through the use of contemporary materials that, although they marked a strong difference, were integrated into the landscape through filtering and reflection.

The hall dedicated to the collection demanded complex technical and lighting requirements. We solved it with a façade that produced a play of reflections of the surrounding landscape. The performing arts building, with unique spatial needs, was designed with a façade conceived as a curtain. In the existing halls, the original architecture was respected, housing programs that did not break the spatial form that characterized them.

The team’s objectives are always to develop a proposal that is consistent with the program’s requirements and with sustainability, while at the same time providing its own identity. Laura Guinea explains how the work goes through different phases. It starts with a good understanding of the needs of the place and the client, and from there, delves into research. «It always starts with conceptual work, with workshops to propose and discuss ideas and with a lot of study of the environment and the program».

After this phase, there is a second one in which many proposals are applied on site. Some are discarded and others are chosen, and in the end a single line of work is carried out. «We move on to a phase of concretion and resolution of the proposal, in which, if necessary, we try to count on specialists to help us give a coherent response. Finally, we proceed to the preparation of the delivery, in which we try to enhance in terms of development and presentation the main concepts of the proposal». 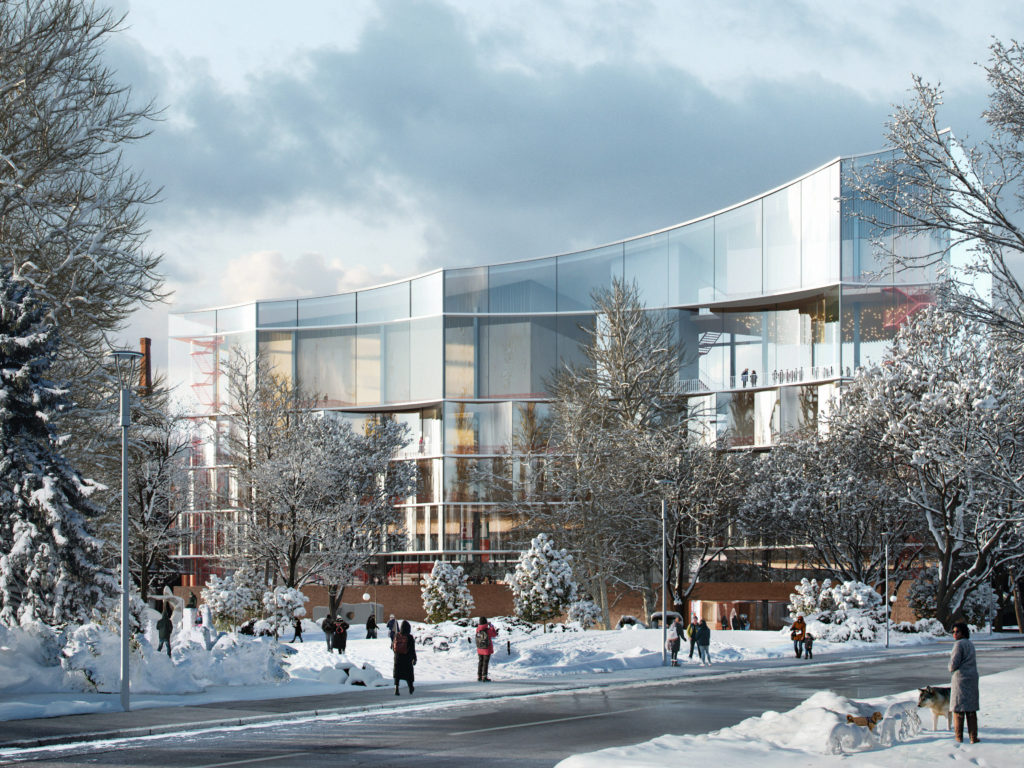 The Sara Hildén Art Museum is intended to be integrated into the global circuit, at its new location in the industrial fabric of Tampere. For this international competition we designed a building consisting of two separate bodies. The lower part consisted of a brick plinth whose materiality was related to that of the context. Above it a translucent volume participated in the skyline of the city.

In this way, we designed a distinctive building with a crystalline appearance, like a mineral rock. Its shape was carefully adapted to preserve the existing trees, while its façade reflected them. The building was connected to the urban space through a sculpture plaza that also welcomed the neighborhood. 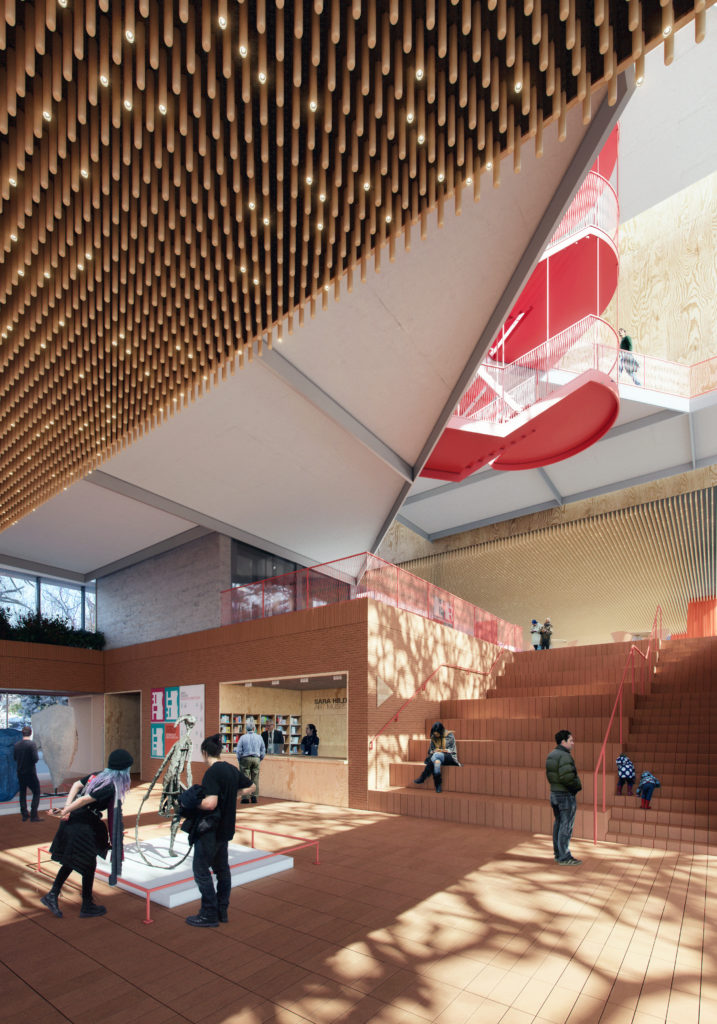 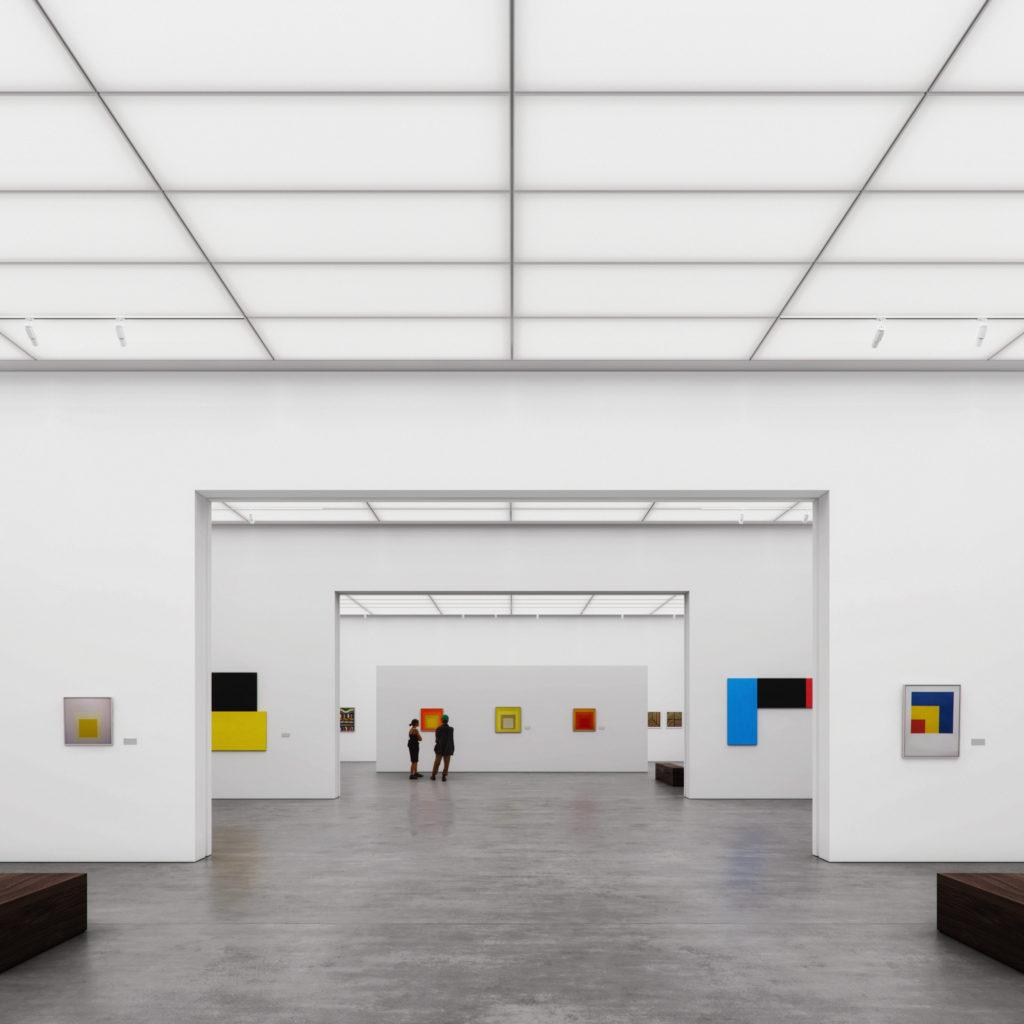 Finally, between these exhibition spaces and the façade walls, we designed a network of corridors and platforms. These created a continuous path through the entire building. They also put the museum into context, bringing the industrial and natural environment outside closer in. 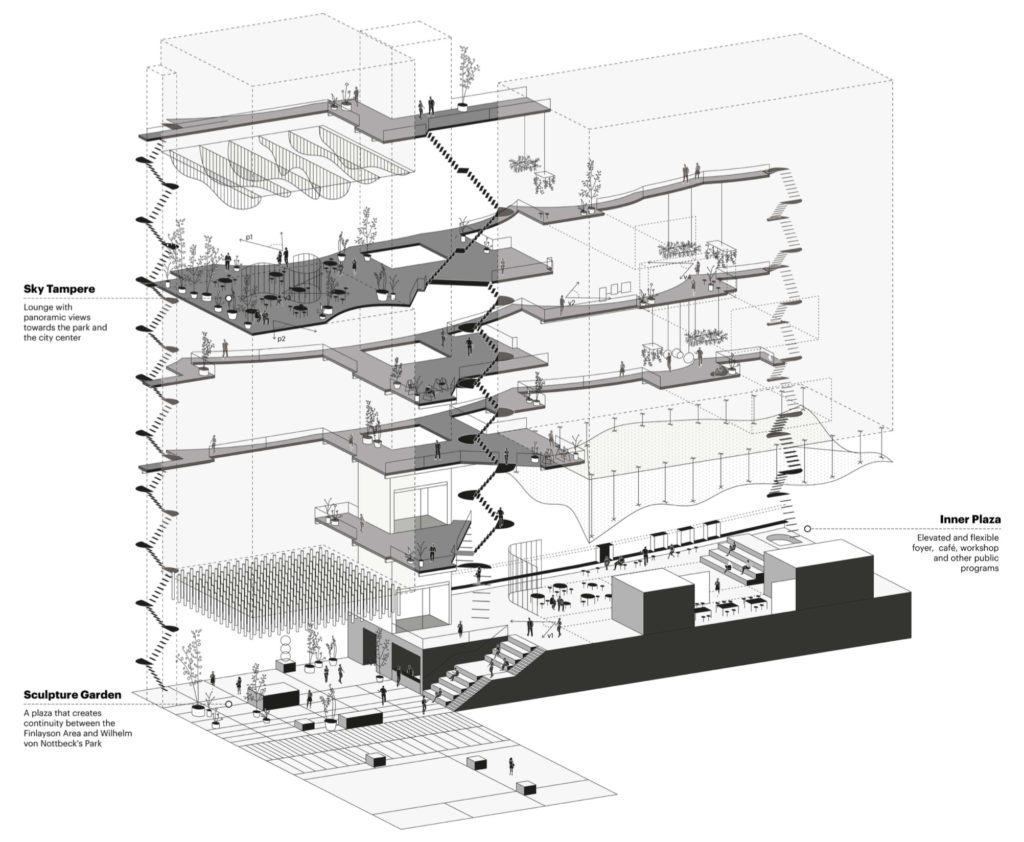 The cloud of platforms created different learning experiences complementary to those occurring in the exhibition halls. It also functioned as a set of viewpoints over the environment. They offered such a view of the garden that it gave the impression that one could touch the trees. Their light and delicate spatiality created an opposite sensation to that of the rotundity of the exhibition galleries.

In all our proposals, one of the key issues is energy efficiency, ensuring that all our projects are sustainable. Joaquín Pérez-Goicoechea points out that «we have been working on sustainability issues for a long time, but from a very open perspective. Sustainability means working with social, cultural, political, energy, economic, etc. parameters, and from a variety of perspectives».

Another aspect that characterizes the work of AGi architects is the diversity of contexts in which the firm operates. This undoubtedly gives character to the studio’s work and, as Joaquín Pérez-Goicoechea emphasizes, «having worked from the beginning of our career in a culturally peripheral framework with respect to more academic Western approaches, has forced us to delve deeply into the sociocultural context of these societies. Just as the idea of landscape or the hybridization of public-private spaces has played a very important role as the basis for many of our interventions». 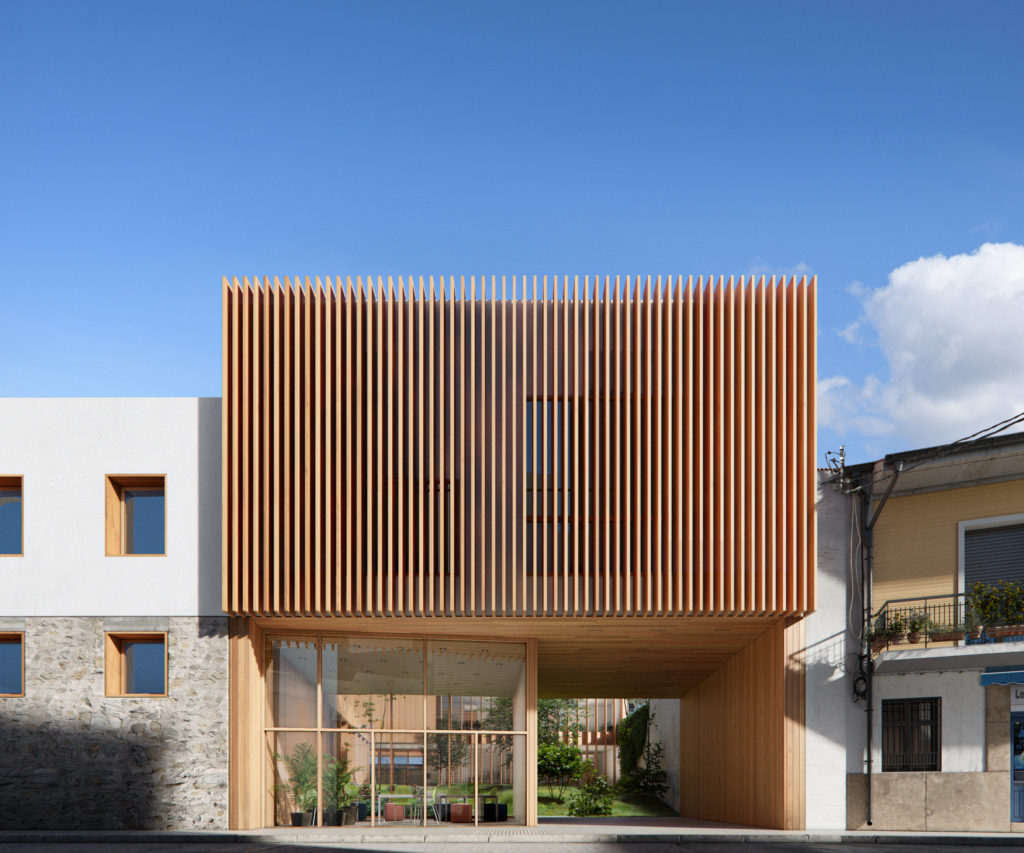 The main concepts behind the project for the new health center in Carcastillo were energy efficiency and urban continuity.

This led us first of all to locate the project in the northern part of the site to take advantage of the maximum hours of radiation. Thus, we designed a building composed of three wings, oriented to the south, which revolved around a central courtyard. In addition, a route was generated through the plot that connected the two streets that bordered the site.

On the other hand, special attention was paid to the materiality of the building. It was decided to oppose two different solutions. One was the exterior, related to the facades facing the street. The other was the interior, which surrounded the courtyard.

The appearance of the exterior was composed of a stone plinth and a white upper body with simple openings. The skin that enclosed the facades of the courtyard was designed with glass and wood, adapting to the different orientations.

This wood was also used to define the two entrances to each of the building’s streets. This reinforced the sense of continuity between the streets and the courtyard. All the materials used were local or local and with a low carbon footprint, both in their manufacture and installation.

«With time and experience, we have optimized the design process of the whole team», says Lucía Azurmendi. Meanwhile, a constant commitment to sustainability, cultural understanding, respect for existing architecture and urban fabric, articulate the work in the office. These concerns are reflected in the aesthetic and programmatic resolution of the competitions.

Thanks to this department we have developed new lines of work, creating proposals for which we were awarded in recent years. We received first prize in the competition for the extension of the Municipal Archive in Burgos; for the rehabilitation of the Lonja de Limpias, in Cantabria; the musealization of 18 prehistoric settlements in Pontevedra; and the rehabilitation of the medieval bridge of Furelos, in Lugo. Outside Spain, we won first prize for our project for five Cities of Justice in Saudi Arabia.

Second prize went to our proposal for the rehabilitation of the historic Delicias station as a Railway Museum and the one for the new Art Center of the Arquerías de Nuevos Ministerios, both in Madrid. In the case of our project for the rehabilitation of the Palacio del Capricho as the Museum of the Enlightenment, we received a third prize; and got a mention in the competition for the new library in Montecarmelo, also both in Madrid. Over time, projects such as Trazas de Pontevedra, the musealization of the 18 Galician castros, have been recognized with the LafargeHolcim Award and a finalist position in the European Award for Architectural Heritage Intervention.