The interior spaces of the city are very rarely permeable. Defined as private, the inside of the buildings are closed to any activity that has not been previously regulated and established as theirs. Our proposal for this library in Montecarmelo sought to create a type of non-consumerist, sheltered and equipped space that would welcome citizens to study, read, gather, speak, learn, work and rest.

The library in Montecarmelo contains a large “inbetween” space, thought of as a public square.

The proposal for a new library in Montecarmelo, Madrid, is the result of a competition promoted by Madrid City Council in autumn 2018, following the identification of the lack of this infrastructure in the neighbourhood. The project was awarded a Mention in the competition organised by the City Council in collaboration with the Colegio Oficial de Arquitectos de Madrid.

The project focuses on the creation of a type of space that is not completely programmed and is open for public occupation. Its architecture gives prominence to developing of the local fabric. It also furnishes the city with the necessary space for the collective learning about coexistence. 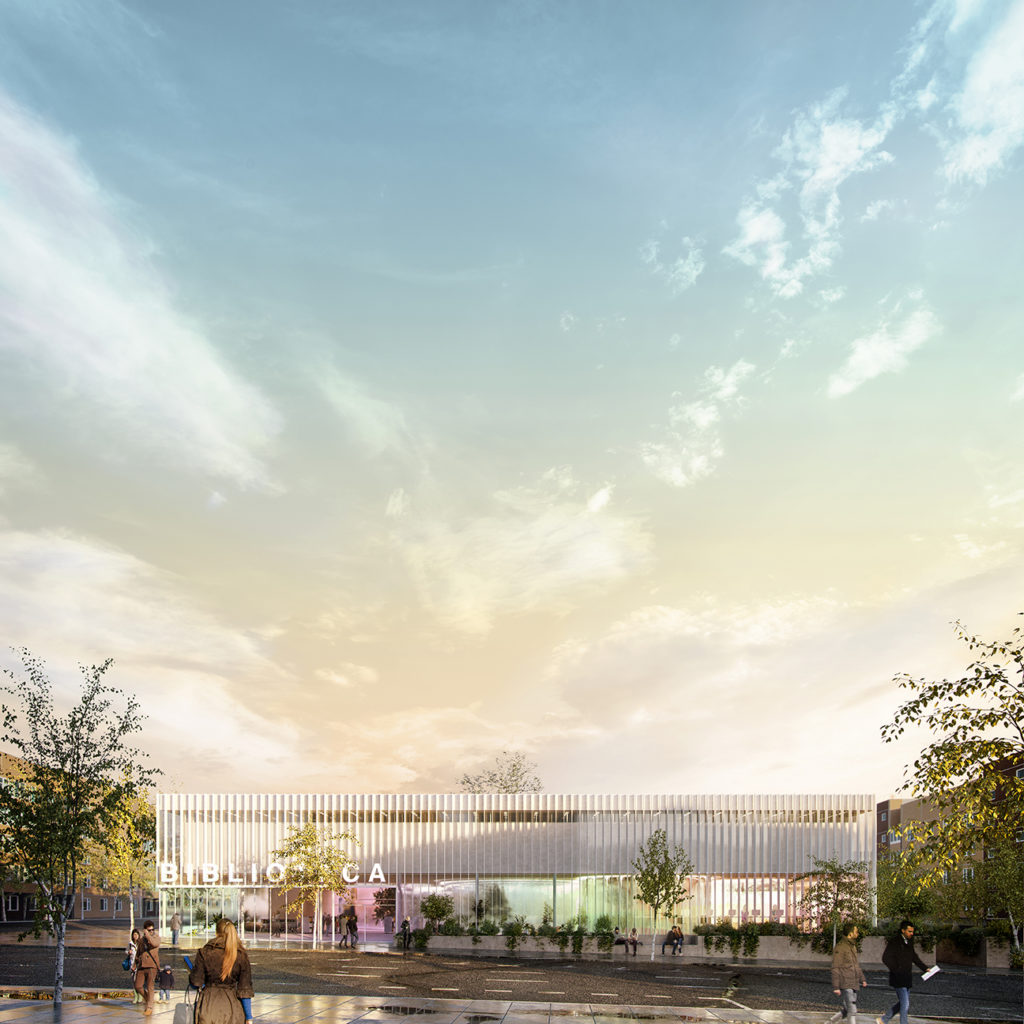 The library in Montecarmelo is defined externally as a rectangular volume that occupies practically the entire site, rising two levels. Enclosed with a cellular polycarbonate skin, its exterior image is simple but clear. The material chosen allows both temperature control and sustainable heat management. Behind the polycarbonate façade, the activities occurring inside the building are partially revealed.

The interior definition of the project is the result of the layout of a set of internal rooms, of different characters, independent of each other and organically distributed, floating on the plan of the library. Their geometry is curvilinear, softening the contact between programs.

In this way, three types of spaces are created inside. Firstly, there are two exterior rooms, patios, both with a curved perimeter and closed by glass. In addition, we find a variety of interior rooms, lounges, also with curvilinear geometries. Their perimeters are built in a variety of materials, which are more or less permanent. And finally, there is an intermediate space we named as “entre”, or “inbetween”, it is the space that remains after the subtraction of the previous ones. 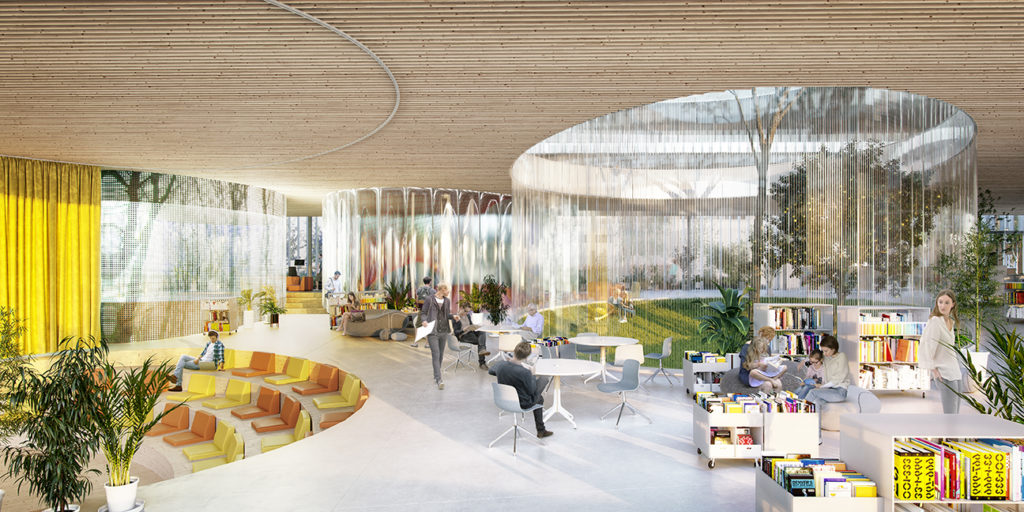 The “inbetween” space is the protagonist of the project and has the will to feel like a public place open to a variety of uses.

There is where we find the reception and reprography, also working and reading areas, desks for internet access, as well as areas where people can relax and rest. It is a space that invites people to enter and freely use it. It feels permeable and is versatile. A library is a fundamental facility in the city and its role is to generate a welcoming atmosphere for people and their knowledge. This intermediate space wants to foster exchange between people, and encourage the development of creativity.

For their part, the purely “interior” rooms accommodate programs with more specific needs, and consequently, their materialities are designed to fit them. The traditional library program is located on the upper floor. It houses storerooms, offices and consultation areas. Small rooms closed by curtains serve for meetings and group study.

In the ground floor, specific spaces have been created for activities organized by the institution or planned by its users. For example, a workshop room offers equipped space for special activities. A cave room favors concentrated study. A soft room provides the maximum relaxation. Finally, there is an auditorium sloped like a crater on the floor, closed with an acoustic curtain. It provides meeting space to the neighborhood agents.

Designing a building committed to its environmental sustainability has also been a fundamental issue of the project. Passive climate control strategies have been applied to obtain thermal comfort in the library in Montecarmelo. The cellular polycarbonate that defines the external volume is a material with reduced environmental impact. Its use leads to considerable energy savings and, at the end of the cycle, it is completely recyclable. The double façade is built with polycarbonate on the outside and a different skin, depending on the orientation of each façade, on the inside. The minimisation of air-conditioned zones has been considered. Materials’ technical performance has been studied. A controlled and continuous ventilation has been planned within the Passivhaus standards. 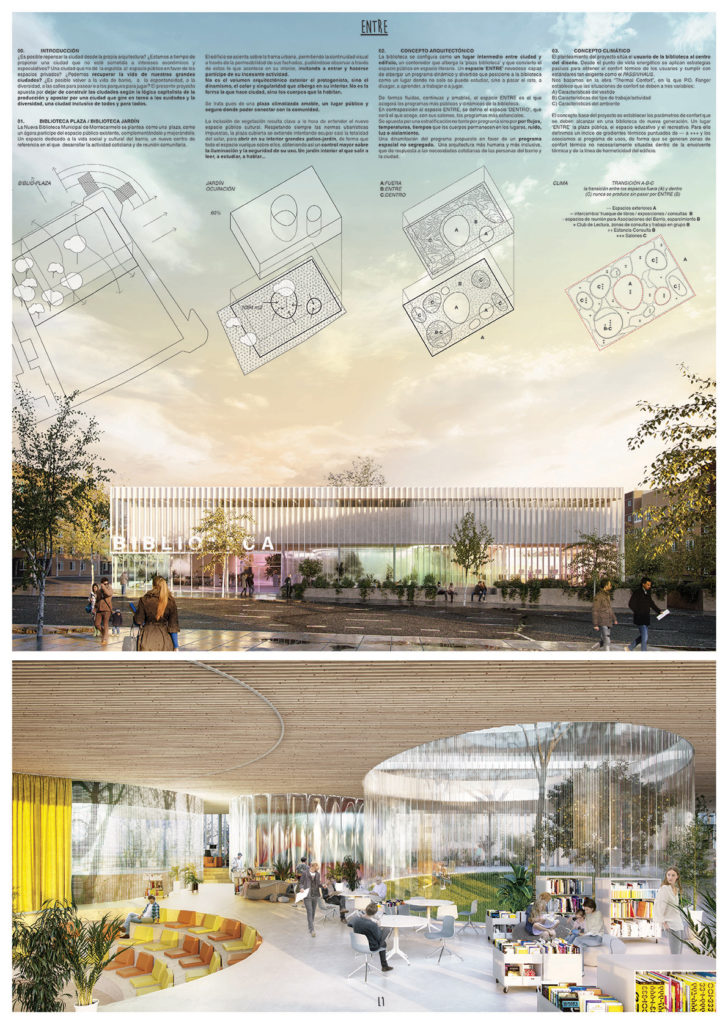 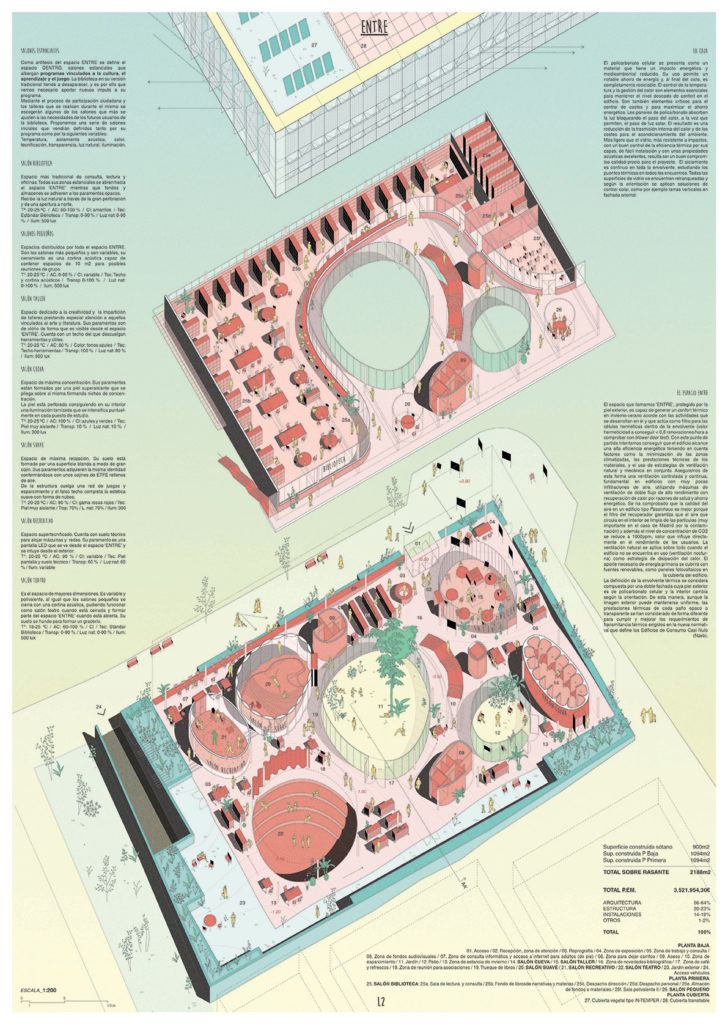 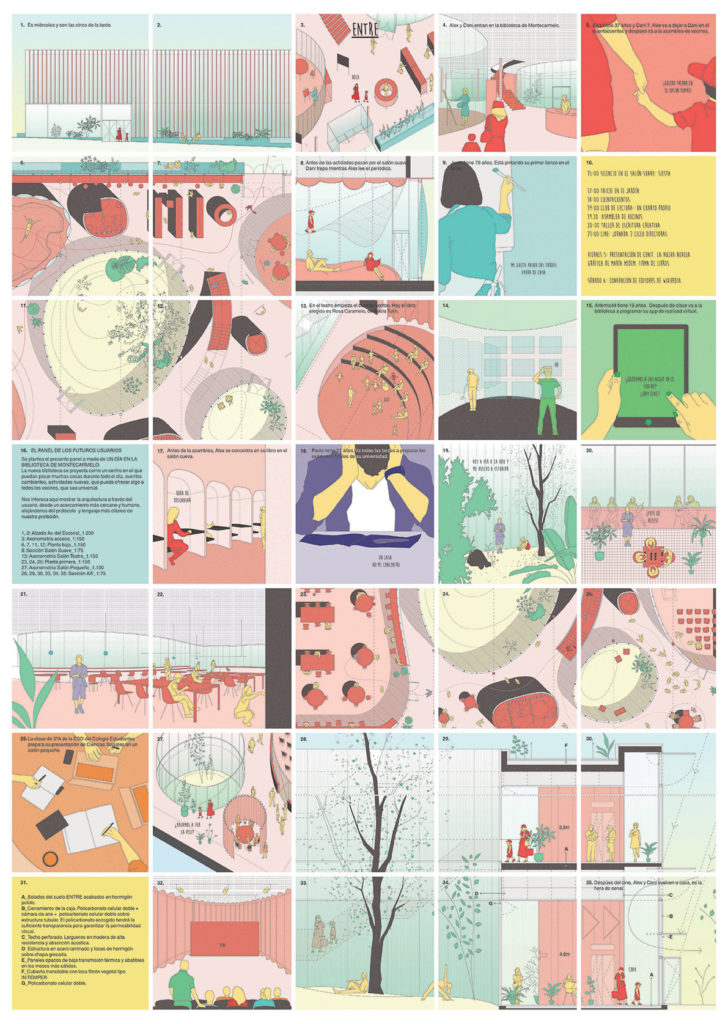 More information can be find in AGi architects”s website.