Between Spain and Kuwait. The influence of Modernity

Kuwait’s independence from Great Britain in 1961 meant imagining a new idea of State, one of a modern country. This was reflected in Kuwait’s new architecture and urbanism, as well as in the construction of an official memory of its land and society. An important element conceived for this purpose was the Kuwait National Museum, whose preparation started in the late 1950s as part of the programme of the young independent state.

The idea of Kuwait as a political entity had emerged during the 18th century following the settlement of various tribes in the Gulf. Trade, fishing and pearl collecting were the economic activities that sustained life. The settlement was surrounded by a wall in 1760, a barrier that would broaden over time to accommodate the growth of the coastal city. At that time, the area was controlled by the Ottoman Empire, but maintained a certain level of autonomy. The relationship with this empire ended shortly after Sheikh Mubarak Al-Sabah was appointed emir in 1986. Three years later a protection agreement was signed with the British Empire. It lasted until the declaration of independence in the 20th century. 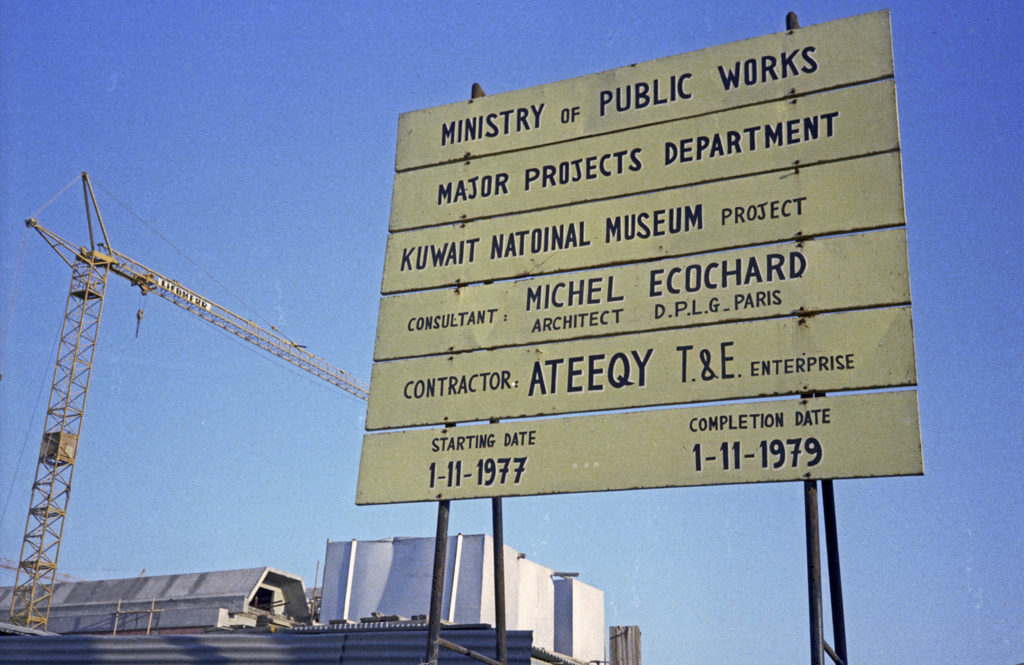 Construction works at the Kuwait National Museum. Image via Archnet

In the 1950s, the city changed radically. Perhaps the most important project was the Urban Plan in 1952, by the British town planners Minoprio, Spencely and Macfarlane, which led to the demolition of an important part of the old city. They proposed urban planning directly linked to the CIAM premises that were in force at the time. The new layout was based on the zoning of functions. The old city, with its former inhabitants relocated, became an area for shops and offices. Eight housing neighbourhoods were organized along Kuwait’s last wall. Zones for education, health and industry were assigned to the peripheries.

Meanwhile, the shadow of the Second World War and its sad consequences had brought the problem of cultural heritage to the table. After the massive destruction of heritage during the war, a treaty was drawn up. It started a political agenda in relation to the historical and natural heritage. In 1954 several States signed the Convention for the Protection of Cultural Property in the Event of Armed Conflict in The Hague. It included a Protocol to prevent the export of cultural property from an occupied territory. Kuwait joined in 1969. Spain had ratified it in 1960.

The creation of a museum was part of the national modernization project. In December 1959, at the request of the Director-General of Education, Kuwait invited a museum expert to formulate a preliminary programme for the National Museum of Kuwait, Selim Abdul Hak, Director-General of Antiquities and Museums of Syria. He reported on the first Kuwait National Museum’s exhibitions, which reflected a historical chronology of Kuwait and consolidated the basic concepts of the nation through history, geography and regional context. 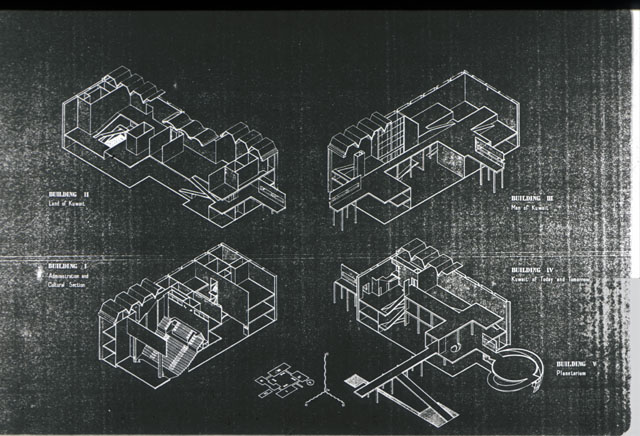 In May 1960, an international competition was held for the architectural project for this state museum to be located in the cultural district of the 1952 Master Plan. The rules of the competition organized the museum into four thematic areas: “Land of Kuwait”, which illustrated the natural geography of Kuwait; “Man of Kuwait”, which focused on the traditional Kuwaiti vernacular language; and “Kuwait of Today and Tomorrow”, which showed Kuwaiti technological advances. In addition, there was a section for temporary exhibitions.

The winner of the competition was the project of Michel Écochard, author of the Museum of Antioch and the Cité horizontale in Casablanca. Michel Écochard was also a follower of modern premises, and an important member of ATBAT-Afrique, a subsidiary group of CIAM. Écochard organized the museum into four brick buildings with a concrete roof. This allowed the visitors to choose the order of their visit to the contents of the museum. The buildings were connected by raised corridors, and a planetarium completed the whole.

The construction works did not begin until 1977 and were not completed until 1983. The architecture was a representative of the international style of the time. Its materiality was characterised by the use of concrete pillars and beams. The brick facades were decorated with concrete blocks. The courtyard between the buildings was covered with a parasol that shed light and softened heat. This protection was solved by means of a flat metal roof, open and light, which was intended to create a “microclimate”. It was elevated 28 metres, supported by widely spaced pillars.

Looted during the Iraqi invasion of 1990, the museum lost many of its historical and contemporary artifacts: Mesopotamian sculptures, coins, ceramics… For a long time, the damaged buildings were not restored as a reminder of the invasion. It was left empty since the Iraqi invasion, with the ground covered with rubble. Finally, in April 2014, NCCAL and the Pan-Arab Consulting Engineers (Pace) announced plans to reactivate the National Museum.

That same year, the 14th Venice Biennale, curated by Rem Koolhaas, was inaugurated. The curatorial team proposed the theme ‘Absorbing Modernity 1914-2014’ as the theme of the National Pavilions. The Kuwaiti pavilion, curated by Zahra Ali Baba and under the artistic direction of the Puerto Rican-Kuwaiti Alia Farid with the title ‘Acquiring Modernity’, explored the symbols of modernity in Kuwaiti architecture, with special attention to Michael Écochard’s Kuwait National Museum. According to the exhibition catalogue, the National Museum provoked the contrast between the pre-oil Kuwait and the later modern State, through the display of antiquities, helping Kuwaiti society to forget the traditional past and accept new forms of life and the new urban space.

Farid formed a working group for the development of the exhibition, which included Aisha Alsager, Kuwait’s office Managing Director in AGi architects, who was part of the editorial team along with Hassan Hayat, Sara Saragoça Soares, and Dana Aljouder. The façades of the museum were reproduced in grey in the room. The exhibition also included a replica of the museum’s planetarium and a soundtrack recorded in Kuwait. 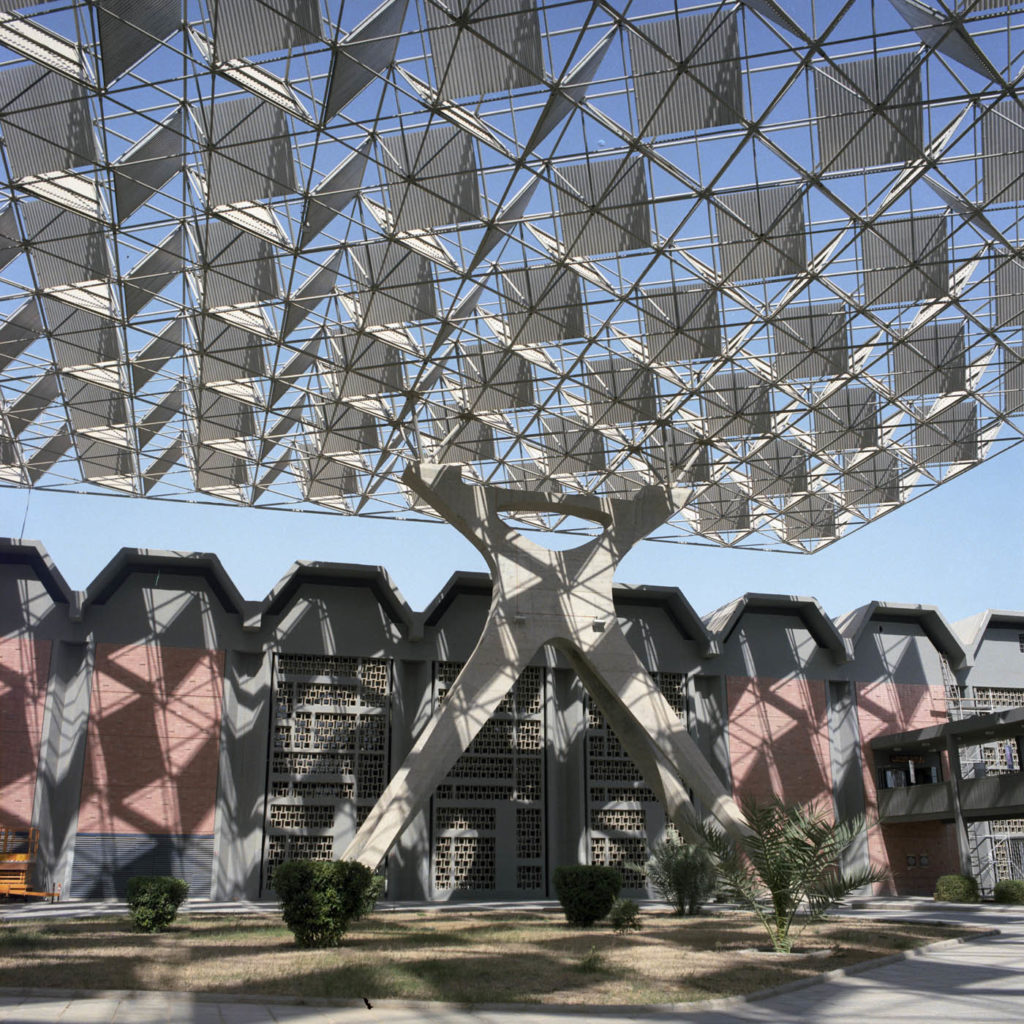 In the words of Farid, the Department of Heritage and Restoration of the National Council for Culture, Arts and Letters (NCCAL), in charge of the conservation, restoration and maintenance of buildings of cultural and historical importance in Kuwait, was primarily concerned with the protection of pre-oil structures, traditional adobe buildings. Therefore, the Venice project focused on the future of architectural heritage and encouraged the NCCAL to include Modern architecture as well.

In the central decades of the 20th century, the destruction of the ancient city of adobe led to the construction of Modern buildings, usually by foreign architectural teams. Today, these same buildings are threatened by their replacement by new constructions, as in the case of the Al-Sawaber Complex, the conservation of which is being requested by a team of experts and citizens.

The Kuwait National Museum proposal, in its early stages of development, was a national symbol that established links between citizens and the Kuwaiti nation. We can read museums as an expression of the dominant values of an era. As in Kuwait, a similar story that may be applied to other regions of the world.

* This article is part of a series of posts in the blog of AGi architects under the concept “Between Kuwait and Spain. The influence of Modernity”. It will be followed by a second part devoted to the role of art and heritage centres in 20th century Spain.