There are architectural spaces in which the function accommodated in its interior outlines its layout and significance to a great extent. These are infrastructural places in the city, which historically have been constituent elements of urban settlements. Spaces that are nodes in a matrix of circulations. Railway stations, airports or ports, entry and exit points of the circulation networks of people and goods, or spaces such as markets, which allow the encounter between people and goods.

In this article we review two buildings, one in Kuwait and the other in Santiago de Compostela, dedicated precisely to punctuating the infrastructure. An airport and a market, both with forceful architectures, with a raw materiality that links them despite the temporal and geographical distance between them.

Kuwait does not have a national rail network, although increasing congestion on the country’s roads has led to a number of rail projects being planned. Kuwait International Airport, located in Farwaniya, is therefore a major element of the country’s passenger communications.

The airport was commissioned between 1927 and 1928. At that time, its main function was as a stopover for British aircraft bound for British India. In 1979, what is now the airport’s main structure, designed by Kenzo Tange, was inaugurated. The airport, described in 1985 by the critic Stephen Gardiner as “the most beautiful airport in the world” was implanted on the ground of Kuwait with all the forcefulness of the Japanese architecture of the time. 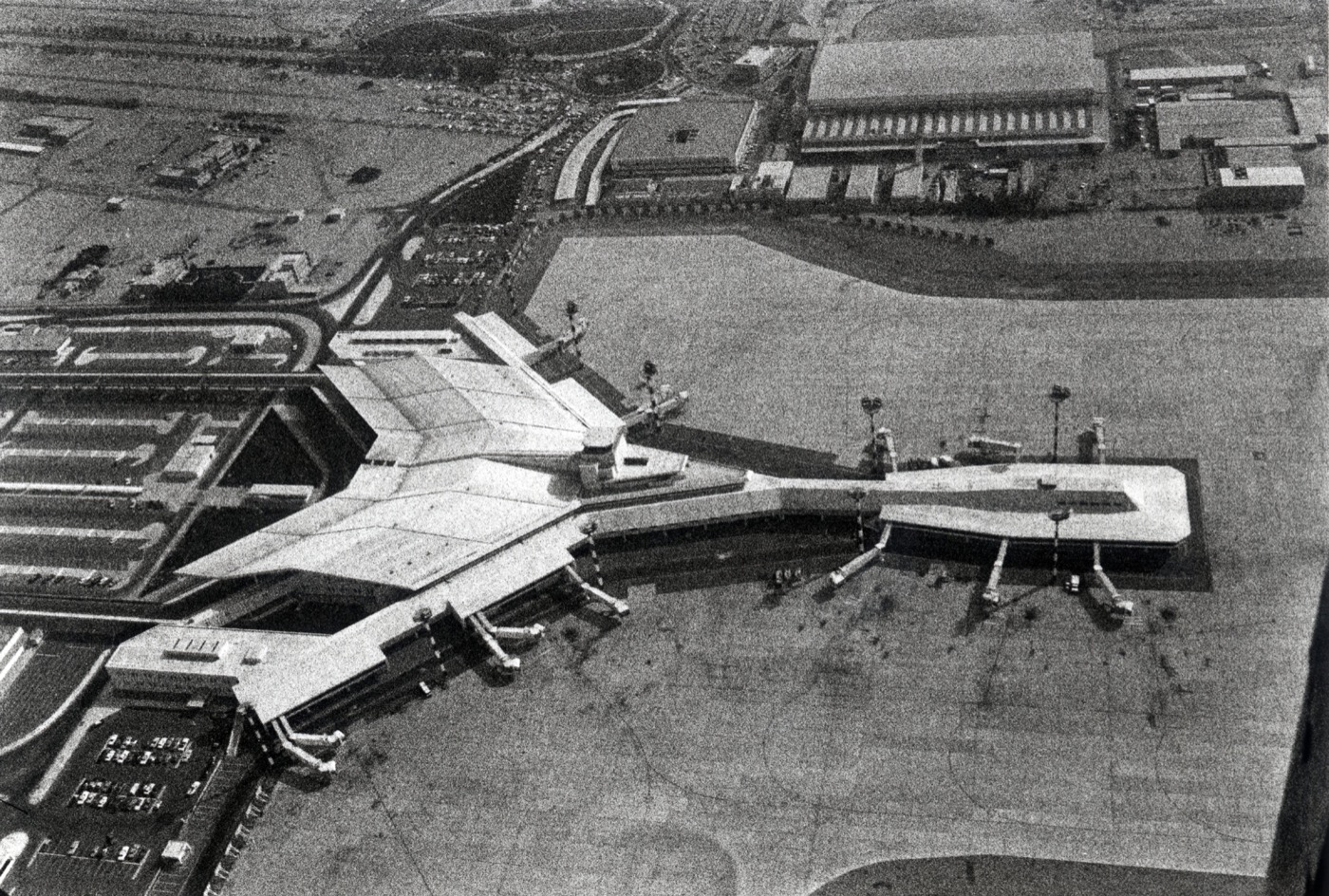 Tange belonged to the well-known Japanese metabolist movement, born in the aftermath of World War II. This was a time of radical change in Japan. The reconstruction of the country was followed by a search for national identity. Metabolism was the translation given to the Japanese word shinchintaisha as a symbol of the essential exchange of materials and energy between organisms and the outside world. The Japanese meaning of the word has the sense of replacing the old with the new. Among the influences of these architects were nuclear physics and biology, which were linked to Buddhist concepts of regeneration. Modern prefabrication was combined with the tradition of renewal in Japanese architecture, the most notorious example of which is the Ise Shrine which is rebuilt every twenty years.

Metabolism became internationally known when Tange was invited to the last meeting of the CIAM association in Otterlo, the Netherlands. There, he presented the new Japanese trends internationally for the first time. He showed two projects by architect Kiyonori Kikutake. The first was the Tower City: a 300-meter-high tower housing the capsule infrastructure of an entire city. The second project Tange showed was the Sky House, a platform supported on four concrete panels with a hyperbolic paraboloid roof. In it, the kitchen and bathroom units were designed to be movable in the house. 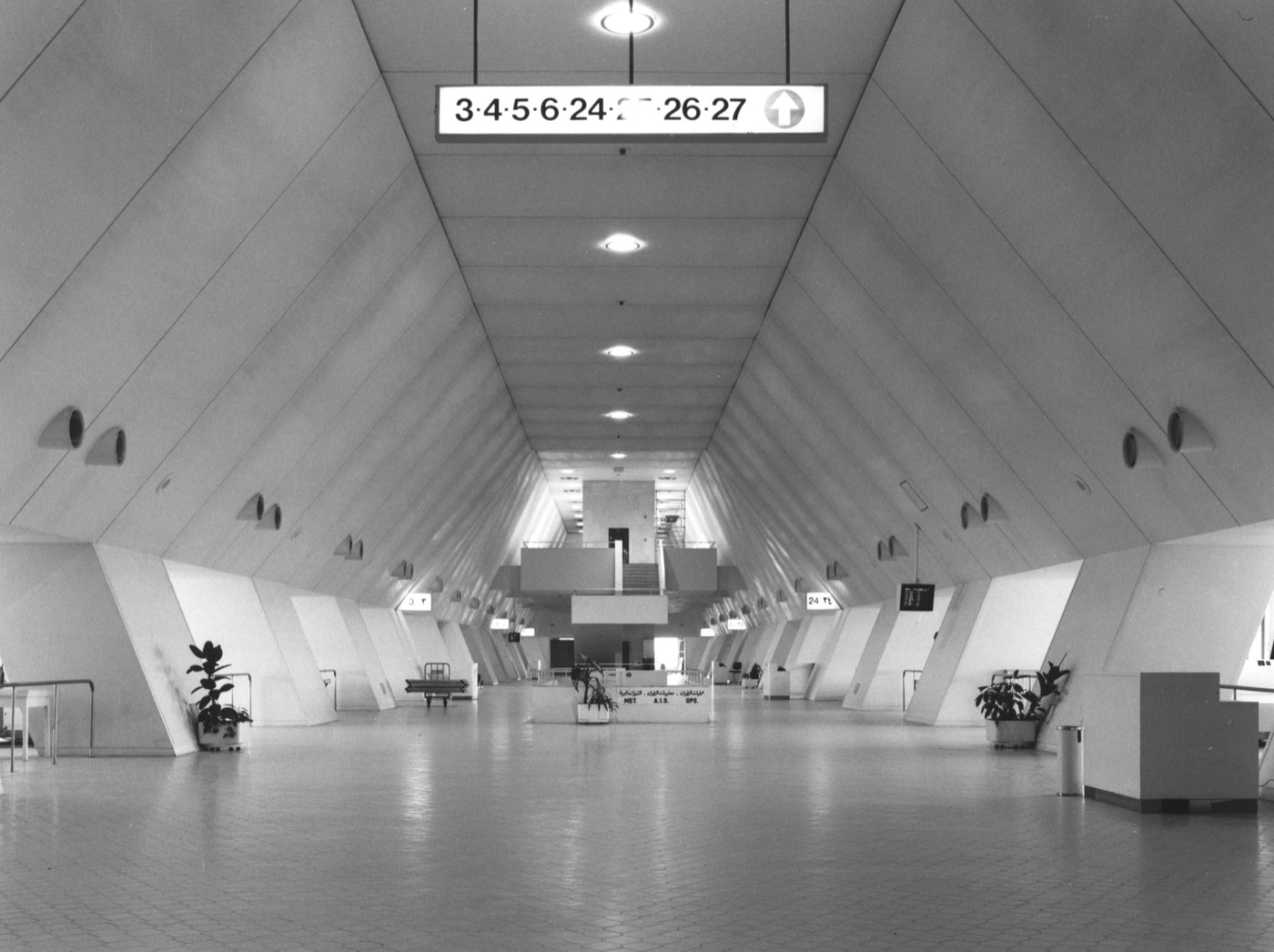 After the 1970 International Exposition, which the Metabolists designed, they began working in the Middle East and Africa, places where great urban expansion was taking place. Among Tange’s projects, the Kuwait airport stands out for its formal clarity. Its hard concrete inclined planes are reminiscent of a spacecraft. It is impossible to avoid thinking that in those same years, Star Wars is causing a furor.

However, by 1988 many of the original elements had been altered. The airport underwent a major renovation and expansion project between 1999 and 2001.

Yet Kuwait’s airport was not the only project Tange did for the country. Nine years before the airport, Tange completed the construction of the Kuwaiti Embassy in Tokyo. In it, gorgeous concrete volumes float, combining heaviness and lightness. 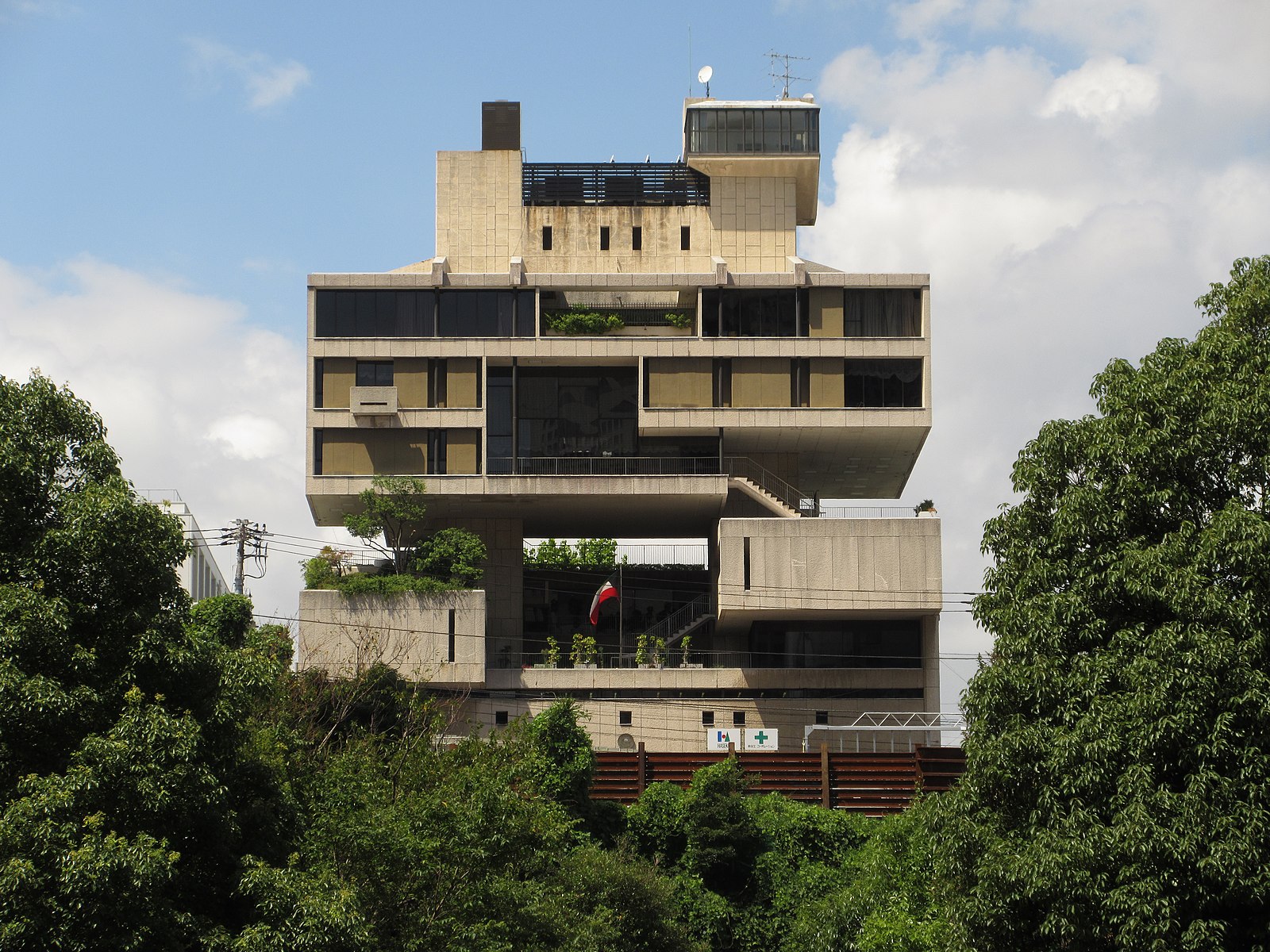 Airports are communication nodes, but a strange kind of node, alien to the place where they are located – a non-place, as Marc Augé used to say. Markets, on the other hand, are perhaps quite the opposite, welcoming spaces, covered plazas where exchange takes place under the umbrella of the everyday.

In the Middle Ages, vendors occupied city squares. For this reason, today’s food markets were called then plazas de abastos. Many of the most renowned ones date back to medieval times. They were originally open-air markets, where peddlers and farmers from nearby towns would set up their stalls to sell their products. This was the case with the Boquería in Barcelona, which was only covered in the 20th century, in 1914.

It is also the case of Santiago de Compostela, in which markets were held in the squares of Platerías, Azabachería and Cervantes. At the end of the 19th century a decision was made to concentrate this intense activity in the old orchards of the Count of Altamira. This is how the Mercado de Abastos de Santiago de Compostela came into being. Its halls were built at the end of the 1930s by Joaquín Vaquero Palacios.

Joaquín Vaquero Palacios was an architect from Oviedo born in 1900. Architect and painter, exclusively dedicated to the latter for fifteen years, he did not stand out for the large amount of work he did, but for the absolute originality of his work. He also excelled for his understanding of the architectural project as a total work of art. His best known designs are five Asturian power plants that go beyond the notion of infrastructure. These facilities were endowed with various ornamental and decorative elements, from facades to lamps and railings.

His engagement with painting was transferred to the space. The rooms were filled with color in order to achieve depth. With certain neo-Romantic influences, he advocated for the concept of Integration of the Arts. This did not fail to connect with the modern proposals made explicit in the CIAMs. 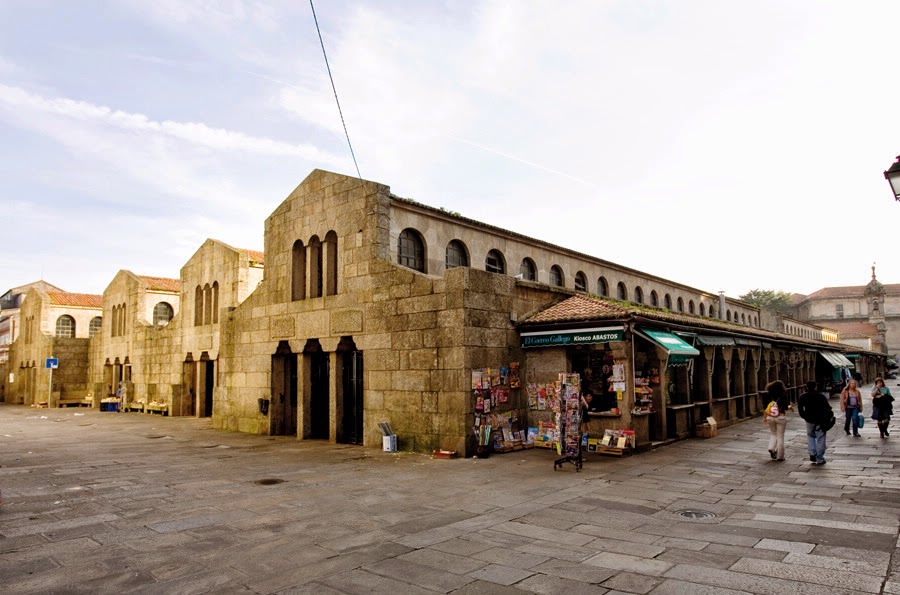 The Mercado de Abastos de Santiago de Compostela was completed by Vaquero Palacios in 1942. It was designed in a time of transition from his early rationalism. In the façade of the Market, a more historicist language emerges. The building is characterized by the use of a vocabulary of pre-Romanesque reminiscences that has been readapted to house the market program.

The market is conceived as a complex made up of eight large halls. Built in granite, their elongated shape and gable roof are reminiscent of a church. The decoration is kept to a minimum, being the powerful geometry of ashlars and construction elements the one that carries the weight of the composition. The result is a complex of timeless appearance, which could be difficult to date. It could be either a work of great antiquity or totally contemporary. Perfectly integrated into the ancient city of Compostela, it has become the second most visited site in the city. 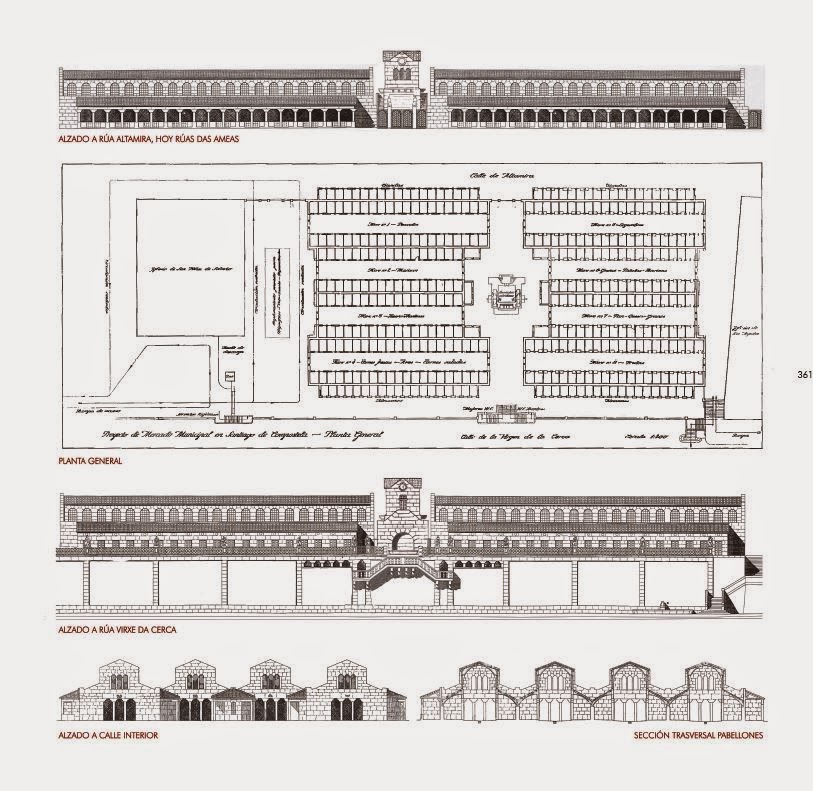