The kitchen is one of the most complex spaces in the house. Heart and machine of the house, it has been the testing space of modernity and a reflection of consumer society, in the form of appliances, utensils, colours and shapes. It has also been a mirror of the daily habits and cultural patterns. This article travels along two important moments in the history of the modern kitchen. Firstly, we will look at the modern kitchen of calculated dimensions. Secondly, we will explore the future-oriented kitchens of the fifties, which advanced many of the technological developments we enjoy today.

At the beginning of the 20th century, society in Central Europe agreed on one thing: it was necessary to design a new, more efficient kitchen. Architects were testing new housing models. The growing population would occupy these practical, modern and economical homes. The so-called “Frankfurt kitchen” became the European model of the modern kitchen. 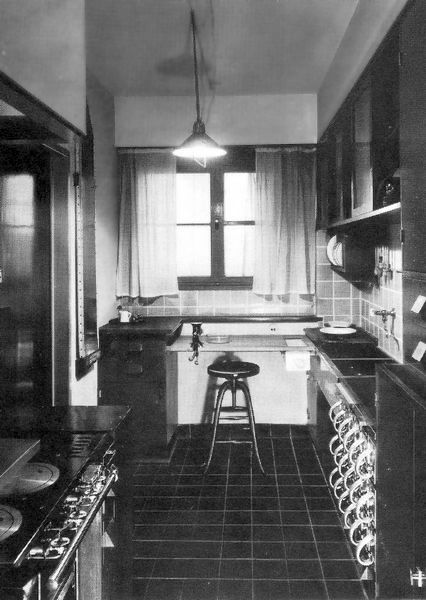 Its author was Margarete Schütte-Lihotzky, the first woman to graduate from the Wiener Kunstgewerbeschule, Vienna University of Applied Arts. In the 1920s she worked on social housing projects with the Viennese architect Adolf Loos. At that time, social housing projects were experimenting with different types of kitchens. Some of the proposals envisaged separate spaces for the kitchen in a separate room. Others were still locating the kitchen within a living space, as was traditional. Communal kitchens were also planned, together with other services such as kindergartens or shared laundries.

In 1926, architect Ernst May invited Schütte-Lihotzky to join his office. She was very good at bringing functional clarity to the design of her homes and kitchens. May was then planning 10.000 dwellings in Frankfurt. It was then when she developed the famous Frankfurt kitchen, to which she applied the theories developed by Frederick Winslow Taylor in the United States a decade earlier.

Taylor had published his ideas in a book called Principles of Scientific Management in 1911. He advocated for the monitoring of factory work in order to achieve greater industrial efficiency. Similar to Taylor, the Austrian architect aimed to improve housewives’ efficiency. Thus, she designed a kitchen that optimized the time needed to carry out domestic tasks by importing Taylorist industrial optimization. 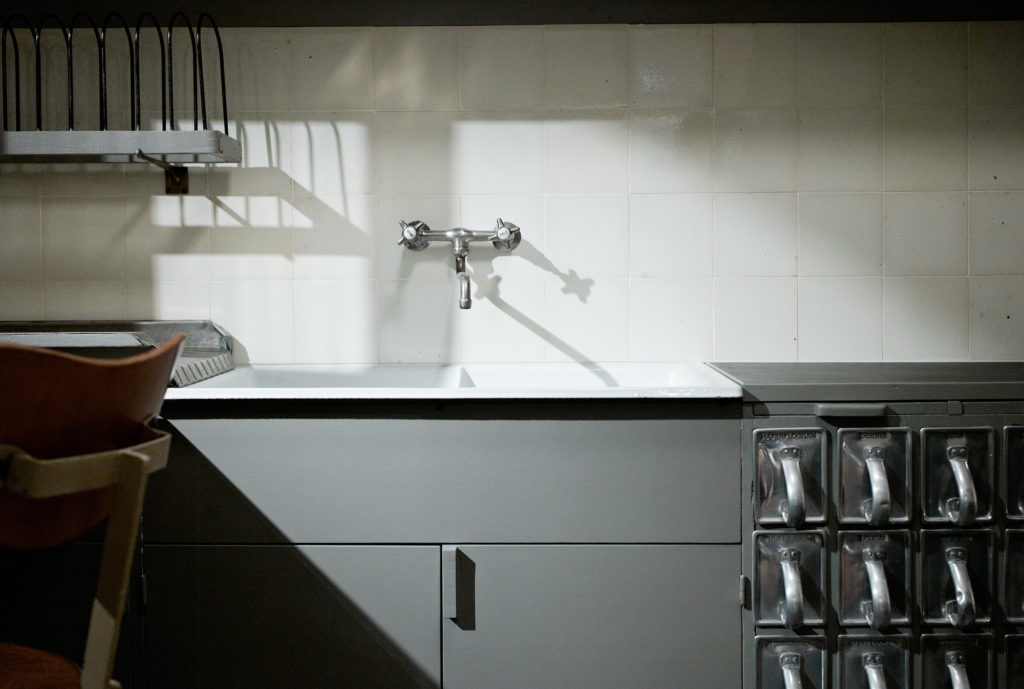 The Frankfurt Kitchen, on display at the MoMA in New York. Image by Jonathan Savoie via Wikipedia Commons

The Frankfurt kitchen was a narrow space, separated from the rest of the house by a sliding door, and adapted for the work of a single person. The food was at hand from the seat provided for the cook. Distances between the cupboards, the desk and the sink were short. The compact size and layout of the modern kitchen allowed for easy cleaning. In order to expand working areas, some were camouflaged in the furniture itself. These pull-out worktops were folded out by means of a handle.

The Frankfurt kitchen was installed in 10,000 homes in Römerstadt, Frankfurt. This small kitchen became a standard in European residential buildings, despite criticism of its spatial separation from the rest of the house.

After the Second World War, advances in mass production led to the widespread use of prefabricated modular kitchens and electrical appliances in many countries. During these decades, advances developed in the fields of architecture and the home industry transformed the project of the modern kitchen and house. It was the golden age of the Kitchen of the Future. With a futuristic spirit, a sensual look and a scientific feel, different prototypes were designed to stimulate consumption. The industrialized house was now a dream, and at the same time it was a commodity made from new materials, such as plastic.

The household appliance brand Frigidare, which was part of the large automobile consortium General Motors, designed its own “Kitchen of the Future” in 1956. It was shown in the well-known film Design for Dreaming. This kitchen was equipped with a device that worked as a dishwasher, dryer and sterilizer. It also had a system for reading electronic prescriptions developed by IBM. It had cabinets that moved, a telephone with a speaker and a washing machine that was activated according to how filled it was. 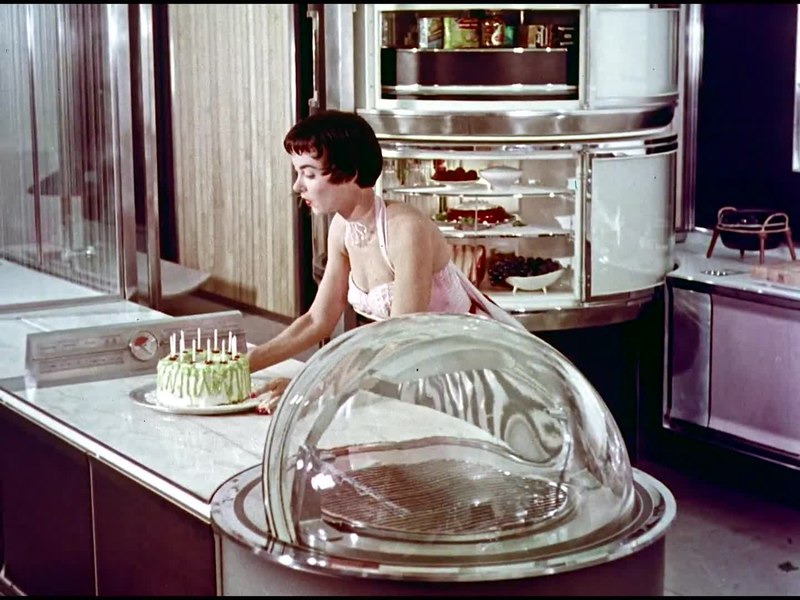 Design for Dreaming, 1956. Via Wikipedia Commons

Also in 1956, English architects Peter and Alison Smithson exhibited a House of the Future at the Ideal Home Exhibition organized by the Daily Mail. Its walls were made of plastic, the chairs were foldable and made of Plexiglas, and it had air conditioning. In it, the kitchen was shaped like a trolley for cooking and serving. It was powered by electricity from a nearby nuclear power plant. The food was preserved without refrigeration thanks to gamma ray treatment. A woman, in a futuristic nylon suit, still served the atomic food to her husband who sat down reading the newspaper.

Later, in 1957 the Whirlpool/RCA brand also launched a kitchen of tomorrow, which was named Miracle Kitchen. This prototype included an ‘electronic brain’ located on an island in the centre. This planning center resembled a factory worker’s workplace. Through several cameras, the kitchen became an authentic panoptic from which to control the rest of the domestic space.

The kitchen also had a microwave, a mechanical maid and ambient lighting. The Miracle Kitchen was an automated and controlled world, operated by remote control. It was self-cleaning and self-controlled. Two years later, in 1959, it was exhibited at the National American Exhibition in Moscow, where the famous Kitchen Debate between Richard Nixon and Nikita Krushchev took place. 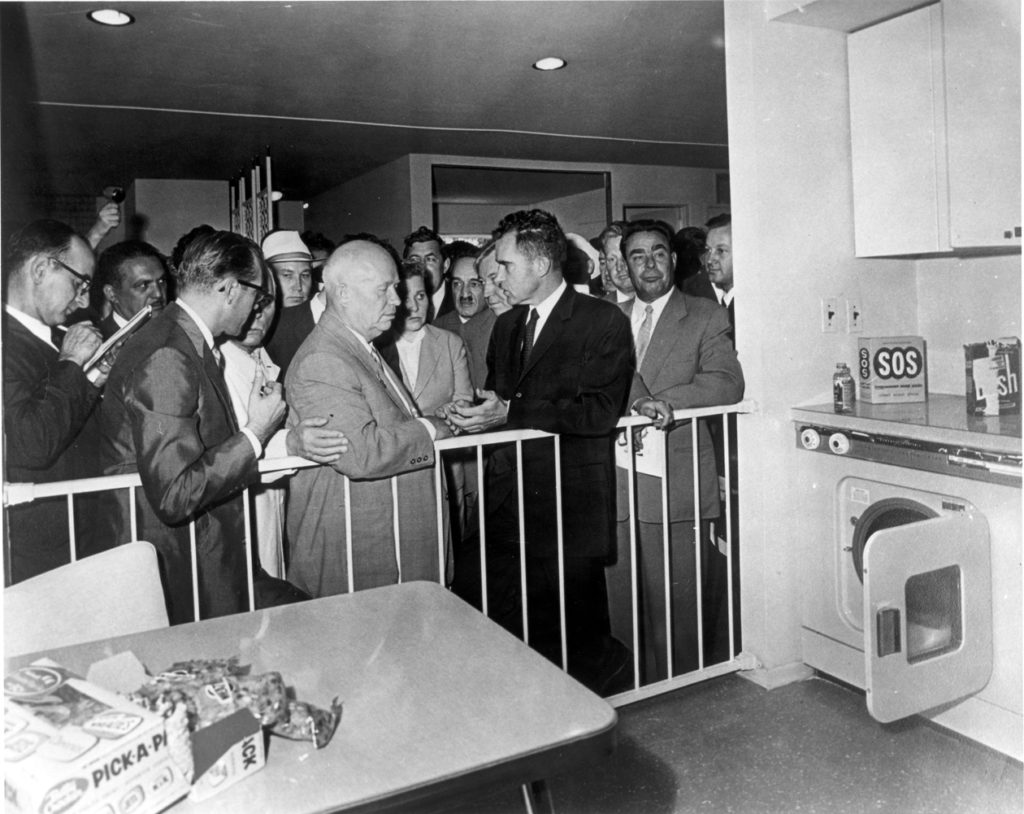 Nixon and Khrushchev photographed in front of a kitchen display.Kitchen Debate, July 24, 1959. Image via Wikipedia Commons

Many of the ideas proposed by these two stages in the history of the modern kitchen are still present in the ones we use today. Technically, the Frankfurt kitchen was a revolution in the field of specialisation and work organisation. Its size and efficiency solved the problem of space in homes for less affluent social classes. The 1950s American kitchens were focused on technological innovations and household appliances. They deepened the role of the housewife as a specialized worker, who also controlled everything that happened in the rest of the domestic space.

Both are 20th century architectures that have marked the spaces used in contemporary times. At the same time they reflect key issues in the history of the century, such as the technification of life, the importance given to the idea of productivity, or the roles assigned to the different members of society.