The shopping mall stand as a 20th century icon. Because of this, film and tv have portrayed them multiple times.

In Stranger Things‘ third season, shopping in an ordinary town known as Hawkins has been radically transformed by the novel shopping centre. One of the scenes in the show involves one of the protagonists’ mother talking to the sheriff at the local TV and radio store. No one enters and no one seems to be going to enter soon. In front of the town hall there is a demonstration against the shopping mall, because of the harm to small businesses. Stranger Things’ mall exists in reality and is located in Duluth, Georgia. Later, the series reveals that the colorful postmodern building is only the cover of a project that endangers all humanity, opening a path to the Upside Down.

Nostalgia is the emotion Stranger Things handles most fortunately. As for architecture, what better time than the present to find beauty in the postmodern spaces depicted in the show.

The shopping mall is a place that brings back nostalgia for our teen years for sure. It brings together activities that teenagers are allowed to do in a controlled space. Cinema, fast food, shopping, bowling. The unforgettable scene in which Eleven goes shopping for the first time is a tribute to classic Hollywood scenes, to films like Clueless.

The first covered arcades were the Galeries de Bois in Paris, back in 1786. Around that time the word souk was introduced into European languages. European colonialism in Africa in the 18th and 19th centuries gave rise to a genre of European literature and painting called orientalism. Many of these works depicted everyday events, including market scenes. As Edward Said‘s analysis showed, the West essentialised these societies by fabricating an exotic, stereotyped, controlled and binarist view of Eastern culture. 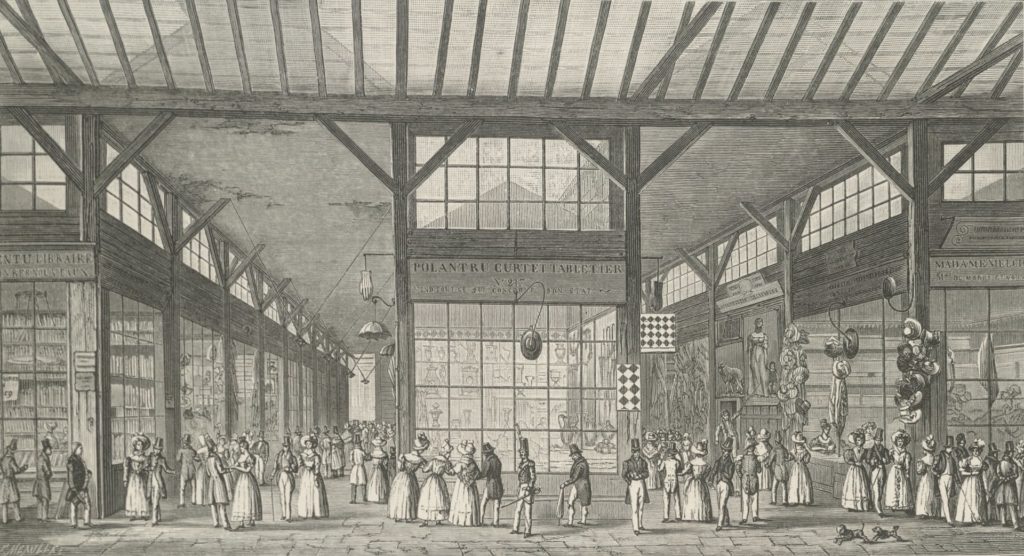 In Paris, the Galeries de Bois became a social hub. Arcades were part of Baudelaire’s inspiration to describe the stroller or flâneur. Walter Benjamin, author of the unfinished Arcades Project, would consider the flâneur essential to the conception of modern life at the turn of the century. Technical developments, electric light or construction in iron and glass, and later other advances, such as postal delivery, the telephone, the elevator or neons, cannot be separated from the new commercial spaces and new ways of understanding the city that emerged from the nineteenth century onwards.

And what would the shopping mall be without escalators? Returning to cinema and tv, for sure the big and small screen have been seduced by escalators. Besides their spatial presence, people move smoothly and elegantly on them. Escalators appear in Rain Man, where Tom Cruise and Dustin Hoffman go down all dressed the same –in a casino. Escalators, this time in a shopping mall, were also the protagonists of the falling in love of the characters in the film featuring Jennifer Lopez, Susan Sarandon and Richard Gere, Shall We Dance?.

The first department stores opened in Paris in 1852. Six years later, Macy’s opened in New York. The first enclosed mall was built a century later, in 1956 in Minnesota, designed by Victor Gruen. With the democratization of the automobile, but above all, with the construction of the road network and the birth of the suburbs, the mall became widespread, first in the United States and later in other countries.

Another important innovation that shaped the shopping mall was air-conditioning. No malls or office towers would exist without it. The 20th century witnessed extreme architectural experiments related to climatization, such as Biosphere 2, a two-and-a-half football pitch structure built to form a closed artificial ecosystem in Oracle, Arizona.

More developments of immaterial appearance were carried out at the shopping mall. The beginning of consumer psychology studies can be traced back to the first half of the 20th century. To the author of the first shopping center has been devoted the Gruen effect: a sense of disorientation that people suffer when entering a mall, due to a deliberately confusing design that favors purchase. 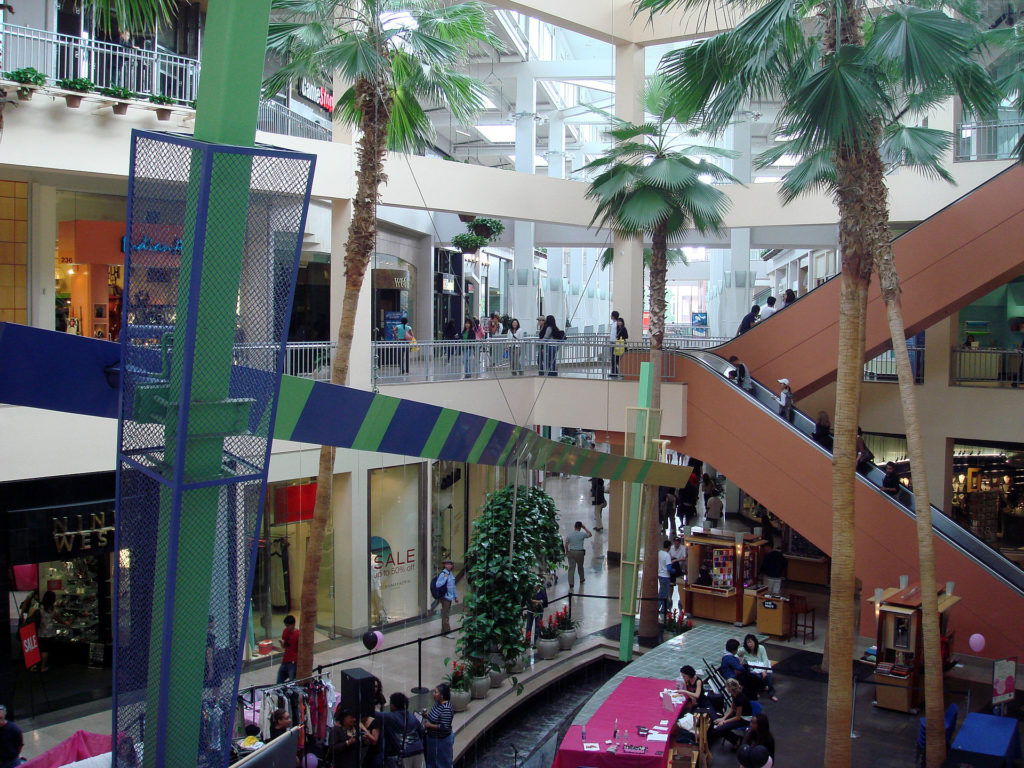 During the 1980s, the decade in which Stranger Things is set, the second wave of shopping malls took place. At this time some architectural proposals for this typology were of interest. Santa Monica Place was opened in Los Angeles, signed by Frank Gehry. The space was full of colour, diagonal elements and artificial palm trees.

In Spain, one of the first major shopping malls was La Vaguada, built in 1983. The Canarian artist César Manrique together with the architect José Ángel Rodrigo was in charge of its design. The building sought the integration of nature in the space, through a facade with sheets of water and the introduction of natural stone and vegetation, indoors and outdoors. A deck in the form of boat sails reminded of the sea. Many of these elements were lost in a very bad remodelling carried out in 2002. Another refurbishment also affected Gehry’s building in the 2000s, deforming these two interesting examples of commercial architecture.

AGi architects has recently completed the construction of  Manara Mall in Kuwait.