Alcouve, in Galician, is a place where the seeds of plants are sown to be cultivated for a short period of time and then transplanted. Alcouve was the name of our proposal for the competition launched to adapt the Pazo de Quián, in Sergude (Boqueixón), into a mirror of the Galician rural world.

Sergude is a village located in the visual basin formed by the mountains of Pico Sacro to the southeast, Monte do Gozo to the north and the city of Santiago de Compostela to the west. Here, there is an old manor house, the pazo de Quián, former residence of the Campuzano family. In this village, at present, a number of institutions related to the Galician heritage are located: the Association of purebred Galician horses, the Designation of Origin of Tetilla Cheese, Galician Honey, and Galician Brandy, as well as INGACAL, the Galician Institute of Food Quality. There is another facility in Sergude that characterizes the life of the complex, the Agroforestry Training and Experimentation Center, which exploits the land around the small village.

The purpose of the competition was to improve the functionality, organization and aesthetics of the existing program, providing both strategic and concrete solutions for this space to become the place for experimentation and dissemination of agricultural, livestock and forestry products of Galicia. This implied an intervention at a territorial level in order to organize the exploitation of the surrounding area. In addition, an action at an urban and architectural level was needed to articulate and give meaning to the different uses in the village.

At the territorial level, we detected five landscape units: forests, silvopasture, the village, riparian forests and water paths, and the agricultural area. This classification allowed us to establish different rules to act in each zone. At the same time, we applied the same compositional strategy in every one of them. This strategy involved the use of enclosures, fences or walls, which are very characteristic elements of this landscape. In the case of dry-joint stone walls, UNESCO has declared them intangible cultural heritage. Fences were used in the proposal to distribute the different functions in the territory. And also to integrate architecture into the landscape, by attaching and raising the buildings from the stone walls.

From a functional point of view, the project holistically integrated the two main programs: the different institutions related to the Galician heritage, and the training center. This was done by giving strategic importance to the educational and interpretational aspect that both functions shared.

In this way, the educational function was expanded beyond the students of the training center, proposing itself as a transversal program accessible to other types of public as well. This would be the case, for example, of occasional visitors who would visit for shorter periods of time for non-regulated training or recreational activities. Thus, the project emphasized the character of the complex as an experimental space for learning and dissemination, a testing ground for the Galician rural world.

Strategic and architectural approach for each of the landscape units

The village was organized on different levels by means of terraces created by enclosures. Some of these walls were heightened to define new buildings, others framed the views creating terraces as well as organized circulations.

At the programmatic level, the uses associated with livestock farming were moved from this area and the buildings they occupied were eliminated to avoid conflict between these functions and the rest. The equine program remained adjacent to the village with independent circulations.

Thus, the village was organized around three new squares, which structured the whole complex and the different parts of the program, giving clarity to the site. Each square was located next to its own parking area, and overlooking the landscape. The largest of them would be the “social square” whose vocation was that of the traditional market plazas. The buildings for professional training and the new building for gastronomic promotion and the bar would be located in this square. 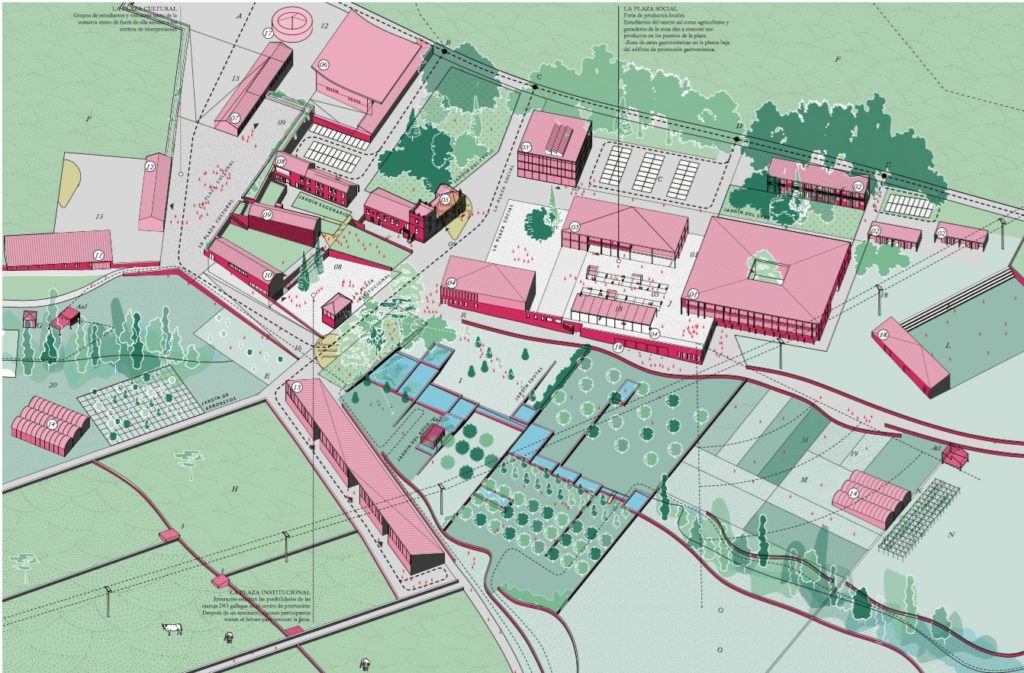 This landscape unit grouped the areas dedicated to cultivation, augmenting those already existing with new ones. It also organized an old watercourse into a concatenation of ponds along the axis of this area. These were completed with riparian forests.

As a complement to the projected bank of phytogenetic resources, which would contain and replicate germplasm (fundamentally living material in the form of seeds), it was proposed to create arboretums. These functioned as a bank for the vegetative reproduction of autochthonous species in danger of disappearing.

There was also a thematic building. Designed as a continuous band, there the different programs were juxtaposed: winery, oil mill, distillery, bread oven, honey extraction and packaging, fruit and vegetable canning area, cheese factory and common facilities. Voids were opened to give continuity to the landscape. 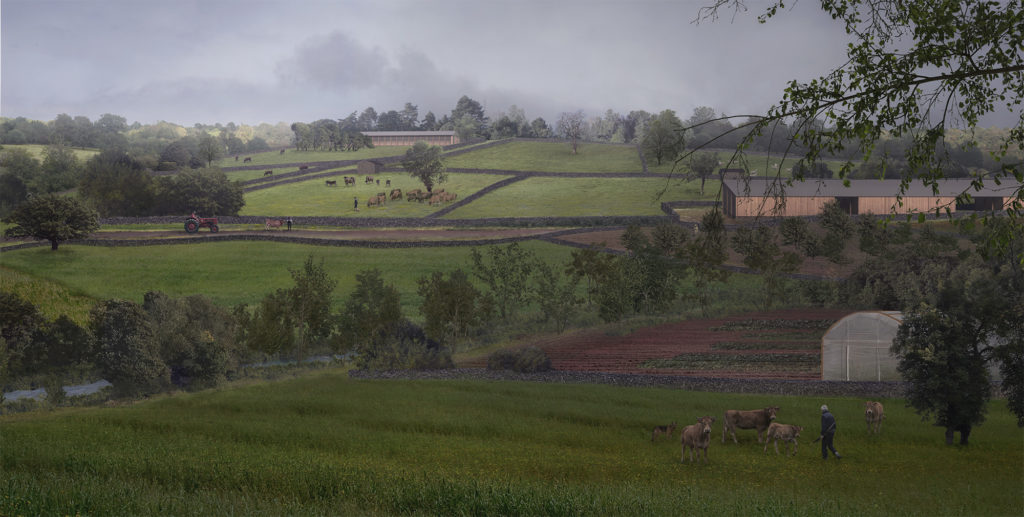 Alcouve. Center for the promotion and image of Galician agricultural, livestock and forestry products. Image by The VIZ Design Company.

Silvopastoralism is the mode of exploitation of a large part of this territory. Livestock is raised extensively and in rotation to allow the fields to recover. The animals, whose variety shows the diversity of species native to Galicia, sleep in the buildings built at the highest altitudes and graze in the lower ones. These buildings were therefore designed to be slightly sunken and attached to the enclosure wall to reduce the impact on the landscape. All of the livestock buildings were concentrated in one area, around a central storage roof for straw and hay (covered and without walls) and silos.

In the meadows, the plan was to plant trees of native species (carballo, ash). The delimitation of these silvopastoral mosaics was planned using traditional Galician fences.

The woodland tree mass was completed in the proposal with autochthonous species. Specific areas were created for their exploitation by the training center, dedicated to the cultivation of olive trees and vines, well oriented towards the south. 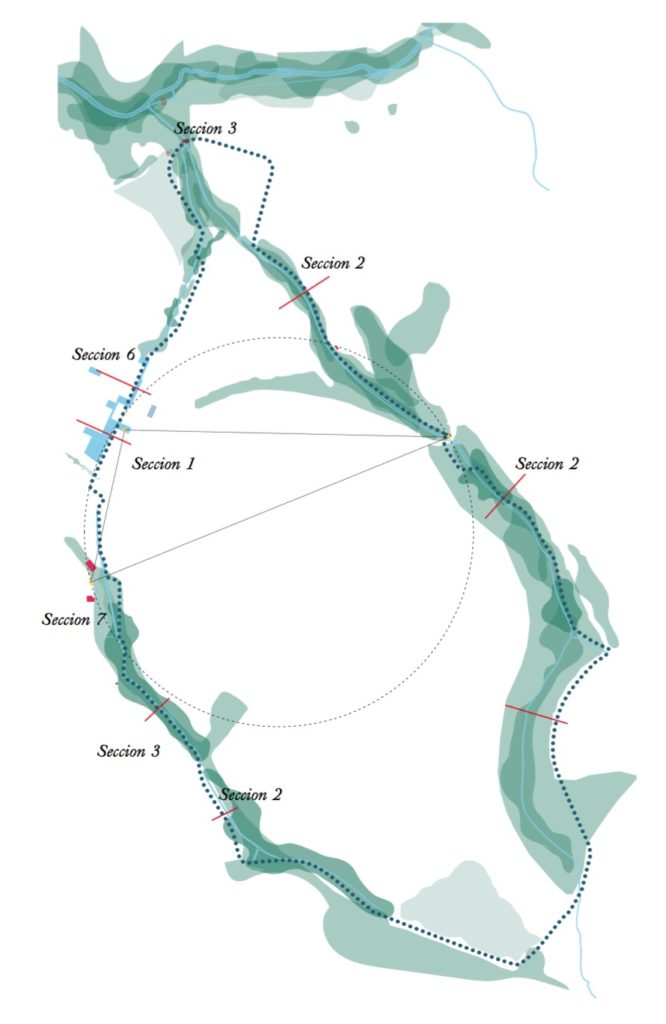 An interpretation trail was designed following the course of the two rivers that cross the property. Three classrooms for understanding and interpreting water completed the visitors’ experience. On the other hand, the same tree mass consolidation strategy was applied to the riparian forests.

Given the large scale of the proposal, and the great number of architectural interventions to be carried out, the project was systematized through a catalog of actions that allowed a strategic approach.

To sum up, Alcouve was configured as a testing ground for the training program that it hosted. This idea brought together the ambition of innovation and promotion of Galician products and knowledge, together with the protection and transmission of traditional cultures. The project gave clarity and order to a complex program while providing guidelines for a better territorial insertion. At the same time, it promoted the enhancement of this landscape.