Valle de Egüés is a municipality located in the metropolitan area of Pamplona, north Spain, composed by several small towns. The capital of this valley is Sarriguren, a eco-friendly urban area settled in 1998. This eco-city is a pilot initiative of bioclimatic architecture and urbanism. In 2000, it was classified as “Good Practice” by the United Nations Centre for Human Settlements. The city model encouraged collective transport and created pedestrian and cyclist networks. Also, efforts have been made to create an eco-community.

The etymology of the name Sarriguren comes from the Basque toponyms of sarri (‘thick vegetation’) and guren (‘beautiful’). And indeed the local environment is the basis of the design of the eco-city, which took special care in the urban articulation with the territory. In addition, 98% of the bioclimatic dwellings were allocated to public protection. In this same spirit, a competition was recently launched for the design of a new housing development. This responded to the shortage of existing rental offer.

This new housing project was defined in a preliminary in-depth feasibility study as two linear blocks separated by a semi-private landscaped space inside the plot. The proposal Mirador del Egüés presented by AGi architects was conceived from the confluence of two lines of work. On the one hand, the study of the climate and sunshine of the site sought to provide a maximum number of dwellings with a good orientation. On the other hand, the ambition was to provide the building with added value, linked to the place and the landscape. Thus the project defined a building from which to contemplate the territory. The dwellings were thought as viewpoints that open their sights towards the Egüés Valley. 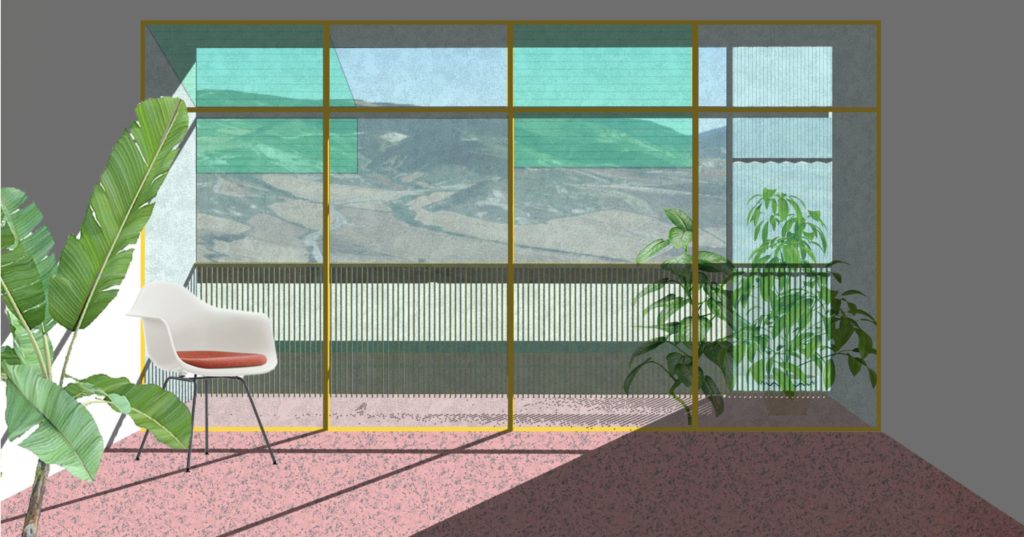 AGi architects’ design started from the general volume defined in the study of detail. In next steps, a series of transformations were applied on it. First, the communication cores were integrated into the blocks. Second, a volumetric transformation was carried out in the southeast corner, favouring the entrance of the sun to the interior façade and the central space. This generated an attractive volume.

Thanks to this modeling, part of the dwellings that were facing west could accommodate their main rooms facing east, looking at the landscape. A greater percentage of dwellings become balcony dwellings. The vegetal roof created a natural filter in transition with the existing landscape.

The volume was then defined through linking the two blocks. This provided intimacy and privacy to the central community space and increased the number of dwellings on offer. On the ground floor, the passages to the entrances created visual connections to the landscape.

The project was based on the Passivhaus standards for bioclimatic dwellings. The norm establishes a reduction in heating and cooling needs by 75%. This is in accordance with the global initiative of the eco-city of Sarriguren to create a sustainable complex regarding social integration, and energy and environmental aspects.

Thus, the south-east façade was conceived as a double shell capable of capturing heat in winter and favouring cooling in summer. In winter, through the polycarbonate panels, a greenhouse effect was generated in the space between the two enclosures, heating the interior of the dwelling. In summer, the panels could be removed. Overhangs and awnings could prevent overheating keeping the house cool during the hottest months. This solution was in line with the different passive systems developed in the eco-city of Sarriguren in search of energy savings through architectural design adapted to local climatic conditions.

In Sarriguren, the spaces created were intimately related to the landscape. AGi architects’ Mirador proposal bet on opening a great crack to the southeast, providing a greater number of bioclimatic dwellings with optimum orientation and the best relationship with the landscape.

Panels from the Passivhaus competition, Ecocity of Sarriguren in Valle de Egüés.