What does the perfect summer house look like? How does Modern Art reflect architecture? Crossing these two questions, in this new article we write a little story about a vacation day reconstructed through the summer experiences of different artists of the twentieth century. In the US west coast, in California and near the Mediterranean, artists were inspired to paint architectures in a partial and suggestive way, as snapshots of a relaxed and quiet life.

The sun floods the garden of the summer house in Maine, near the sea, where a couple spends its summers together. Maine is a state in the north of the country, its winters are cold but today the sun shines so brightly that the house looks as yellow as the sun. This house is traditional, with its typical wooden facade and neat windows. In the surrounding garden, the lilies open splendid and red. Noon is approaching. Gardening seems increasingly unbearable, in spite of the light breeze. 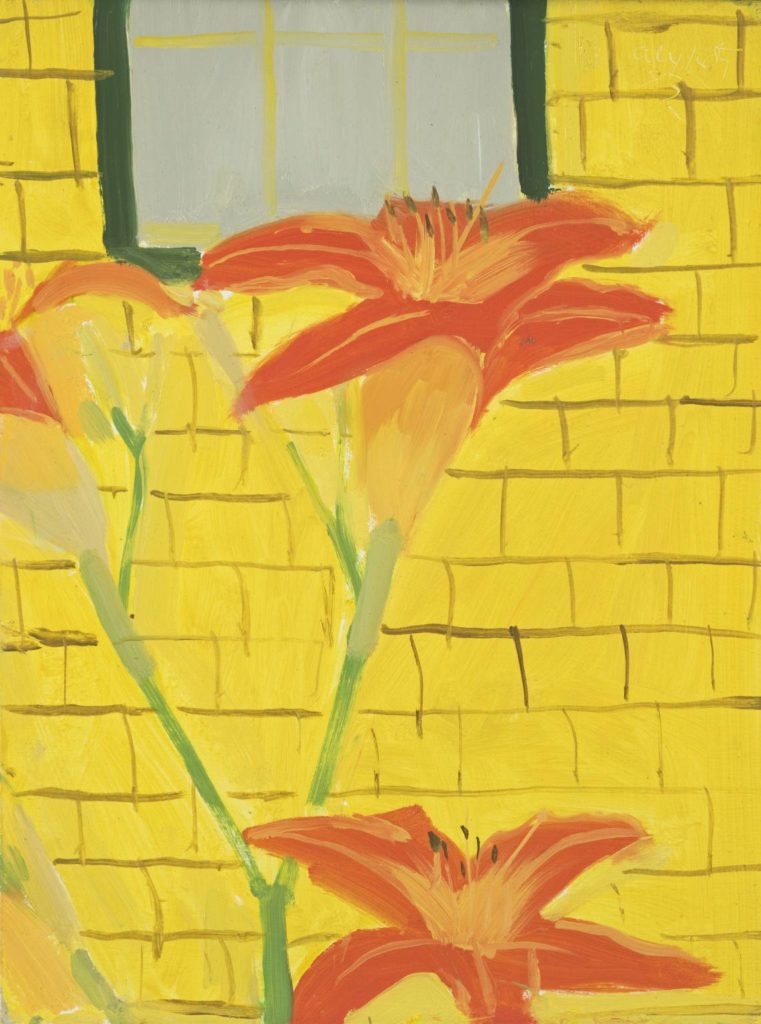 Alex Katz (New York, 1927) is one of the precursors of pop art. His work is characterized by his flat compositions, and his silhouettes or ‘cut-outs’. Since the late 1950s, Katz and his wife, Ada, have spent every summer at “the Yellow House,” a 200-year-old farmhouse that the artist painted yellow. Katz has depicted the elements surrounding the house: the fields, the trees and flowers, the house itself, the pond and the dock.

Determined to freshen up, the woman leaves all the gardening tools on the ground. It is not long before an explosion of sound and foam interrupts the silence that has taken over the late morning. Again, for an instant, an uneasy peace returns. There is no longer a breeze, not a cloud, the sky is as flat as the abstract forms of International Style architecture that sprawl along this coastline that has the best sunsets in the world. The domestic swimming pool seems today the best invention of the 20th century. The scorching heat generates an atmosphere of stillness. 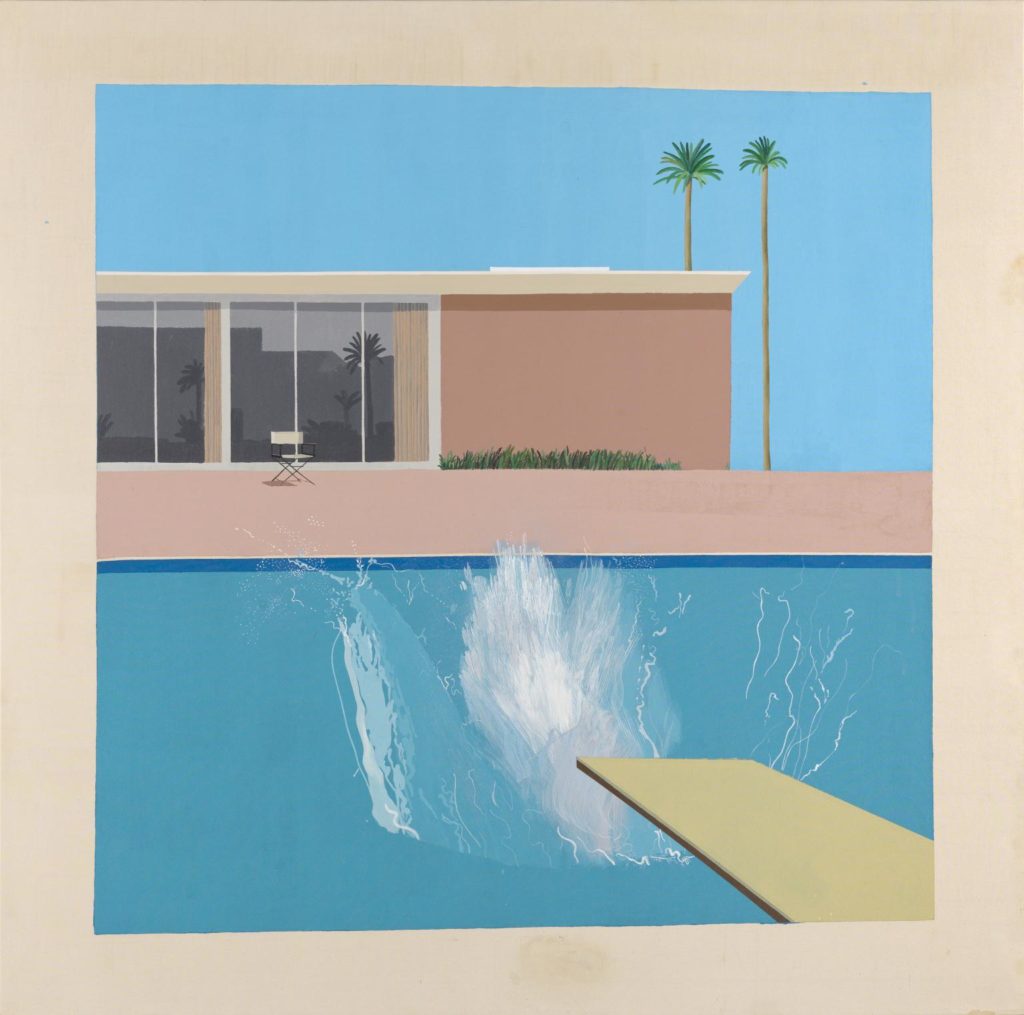 David Hockney (Bradford, 1937) first visited Los Angeles in 1963. In 1976 he established his permanent residence there. He liked the relaxed and sensual lifestyle of California. Everyone had a swimming pool. In A Bigger Splash, the bright, intense colors highlight the strong Californian light.

She pulls her head out of the water and shakes it, to separate the wet hair from her face. Then, another sound comes from inside. Again water, in tiny droplets, is released, and now it slides over a body that carefully removes the soap from his skin. One hand slides over the other. The murmur of the water stream is soothing and refreshing. The city fights against the power of its enormous sun with water infrastructures and ingenious, hedonistic architectural devices. Kidney pools and huge showers are all spaces of homage to physical pleasure characteristic of 1950s Los Angeles. The water supply infrastructure, invisible beneath the city’s ground, has changed the history of domesticity. 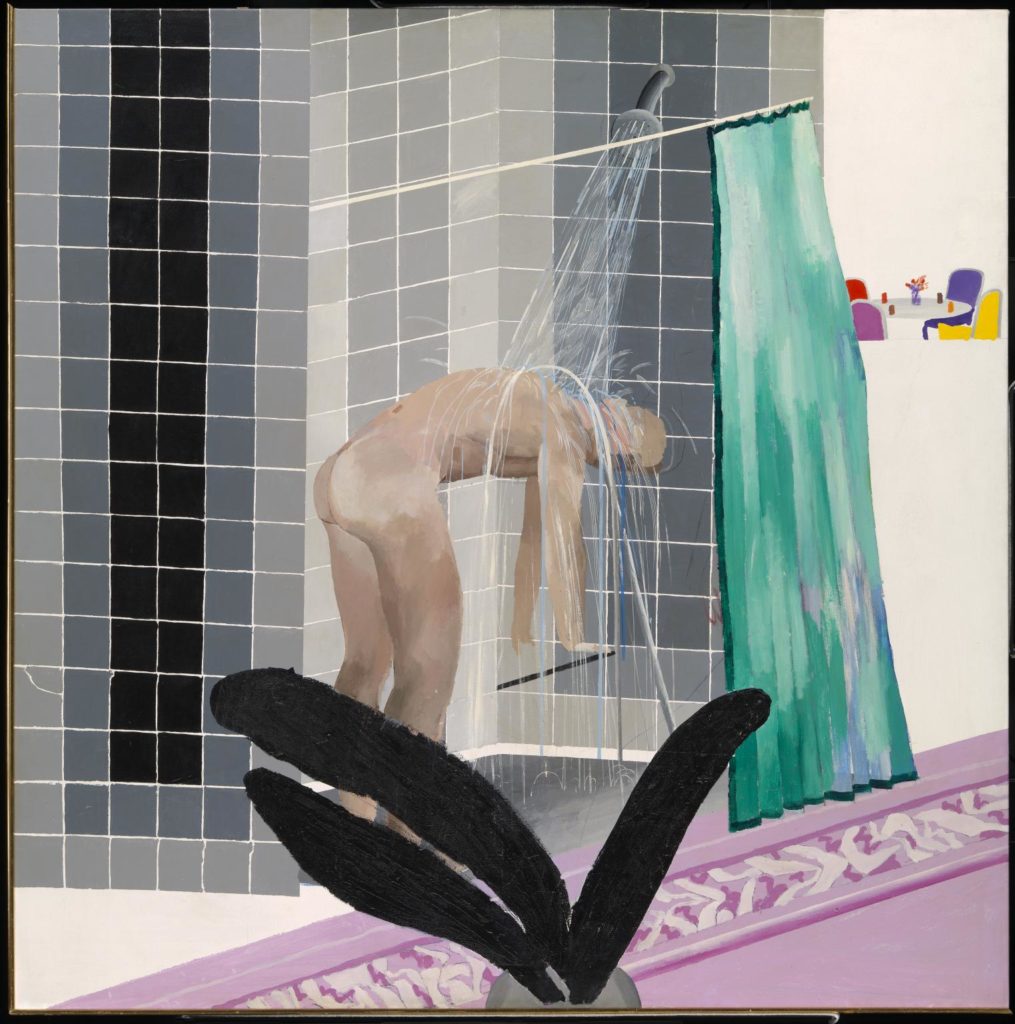 Hockey painted abundantly the water of Los Angeles, especially fascinated by the sprays that produced bodies and architectural devices. Hedonism and the cult of the body are characteristic elements of modernity that the British painter reflects so well in his paintings. They are linked to the development of urban infrastructures that took place in the 19th century. They are also linked to various cultural movements that sought to alleviate urban life after the industrial revolution.

The summer house we see is hardly decorated and the large openings are its main feature. Framing the views is the main exercise. As if the architecture reflected the desire of the human body, in conditions of light and heat, to free itself from all mediation between the skin and the exterior, the house is also stripped of all ornamentation. The sea, the empty horizon, allow the eye to rest after months of accelerated work in the city. 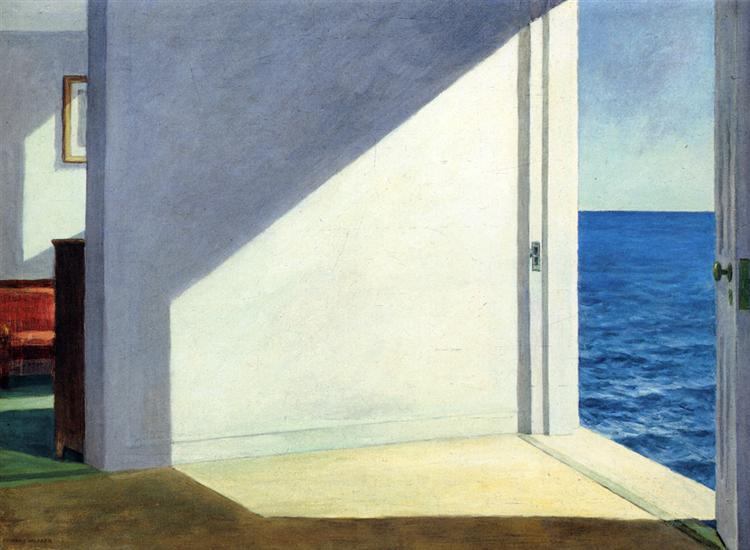 This painting by the American artist Hopper (Nyack 1882 – New York, 1967) conveys loneliness and introspection. In 1930, he and his wife Josephine Nivison rented a cottage in South Truro, on Cape Cod, Massachusetts. They returned every summer, and built a summer home, on a cliff overlooking the water, in 1934. From there, they traveled by car when Hopper needed to paint.

Faced with the strength of the midday light, the man lowers the Venetian blind until it is partially closed. The light illuminates a glass of wine and casts its shadow on the surface of a wooden table. The black and gray planes construct a play of geometries that seems pure reason, objectivity, evoking a Cartesian tradition that is impossible to deny. A newspaper lets us know what date we are in, and undoubtedly tells us about the inhabitants of this house, their ideas and their friendships. 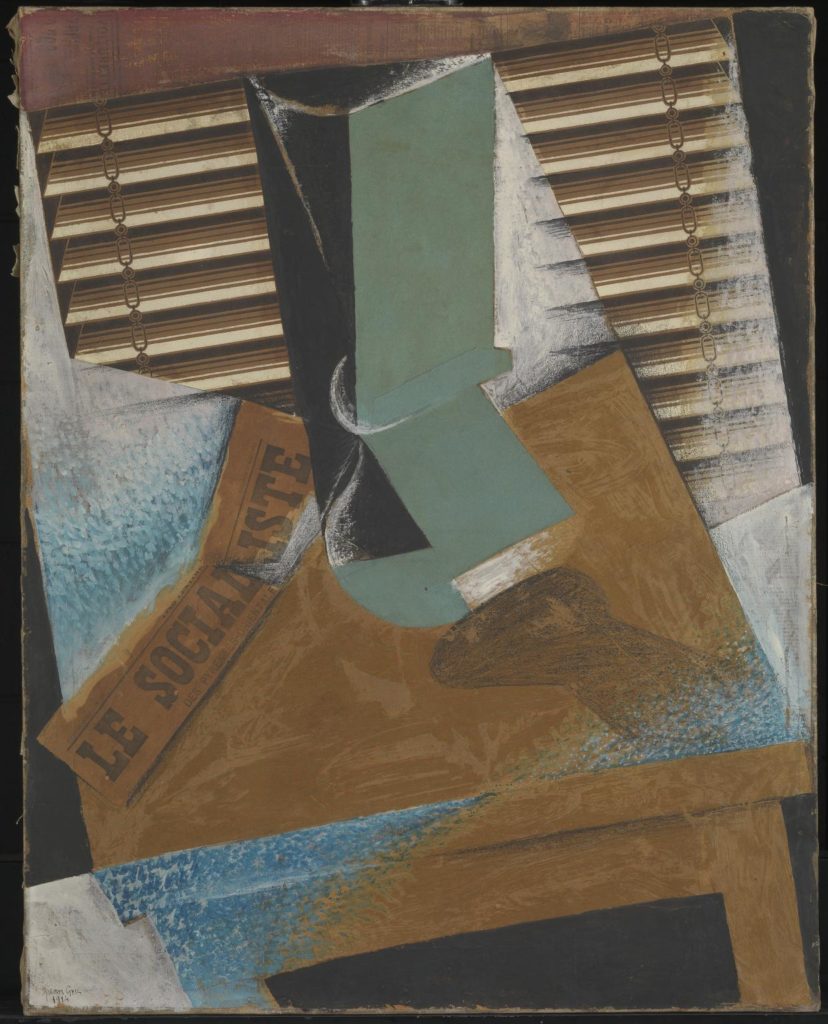 Juan Gris (Madrid, 1887 – Boulogne-sur-Seine, 1927) spent the summer of 1913 in Céret, in the French Pyrenees, where he began to work with the technique of papier collé: cardboard and paper cuttings, sometimes from newspapers, adhered to the canvas and combined with oil. In his painting, geometry and rationality had a special importance.

In the same room we observe a table, with food and some cooking utensils. Summer means slow dinners and long after-dinner meals, a lazy time that evokes the gratifying sensation of surrendering to the pleasures of the body. 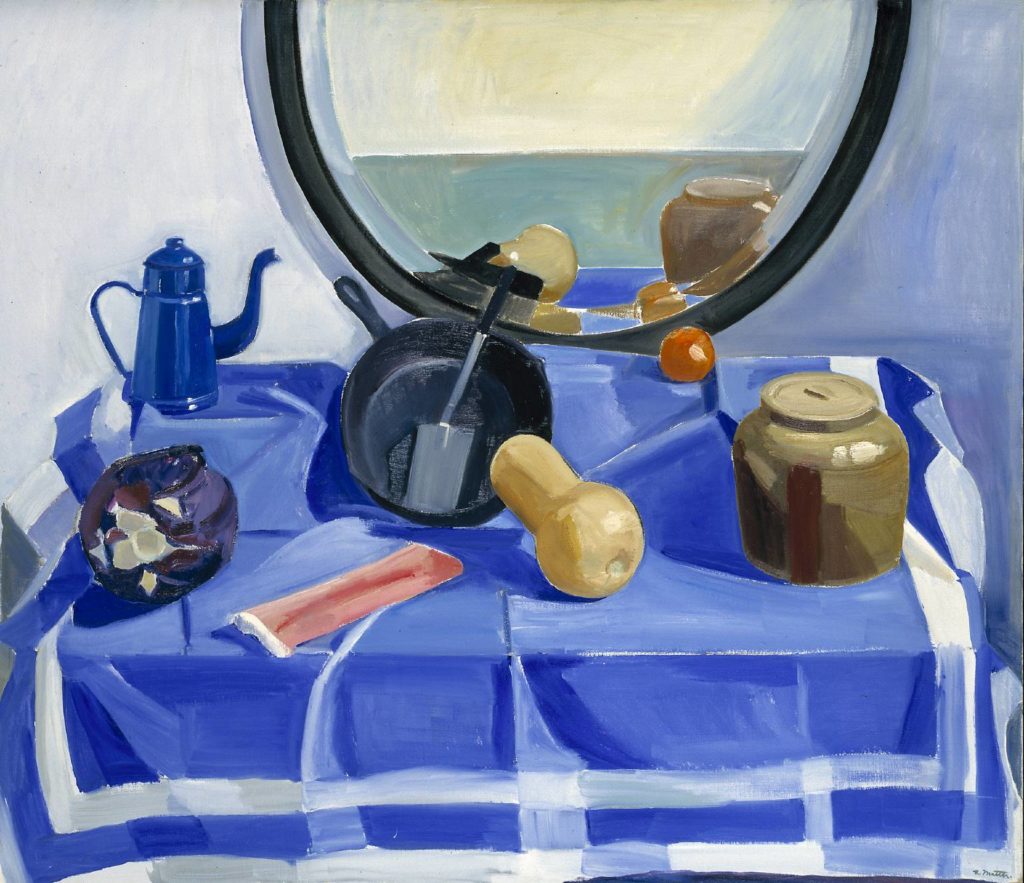 Louisa Matthiasdottir (Reykjavík, 1927 – 2000) painted this picture in which the arrangement of the objects, separated from each other, conveys a strange sensation. The mirror gives us an image of the empty room, but easily, by its colors, we could imagine that we are seeing the horizon of the sea through a window. The intense blue of the tablecloth also speaks to us of summer, and takes us to the traditional colors of the Mediterranean villages, although the painter’s reference is located in another geography. What she shows us is a Vanitas, a tradition of still lifes alluding to the ephemeral condition of life, and the inevitability of death.

We close our eyes, feeling our body heavy from our own pleasure, numbed by the heat and the food. The eyelids from the inside are glowing red, in our head we see alternating the blue images of the sea we saw through the window, the white of the limpid walls of the house and the yellow of the burning sun. The siesta arrives, welcomed by the sounds of the sea in the distance and the relaxation of a moment in which there is no hurry to do anything else. 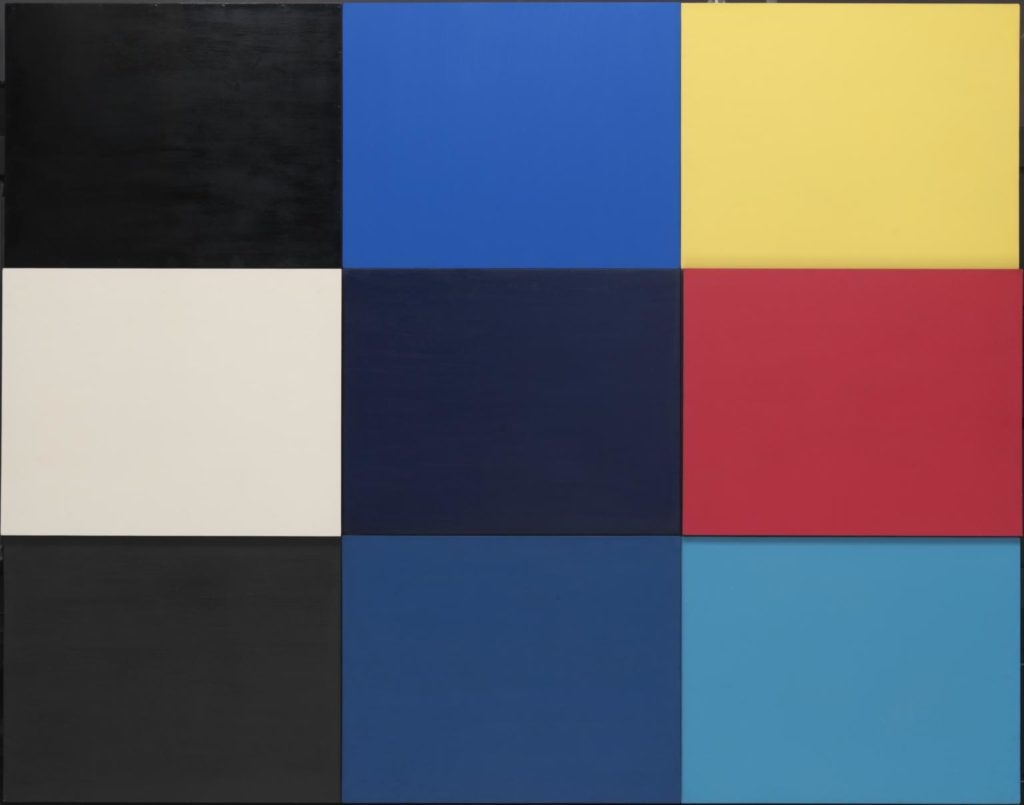 The American abstract painter Ellsworth Kelly (New York, 1923 – New York, 2005),also spent some time traveling in the south of France, between 1949 and 1952. In this composition characteristic of the artist for its organization in colored rectangles, the different shades of blue are intended to refer to the colors of the Mediterranean Sea. The rest, suggests typical tones of the architecture of this geography. Thus, Kelly did not portray this place through representation, but evoked it. He conveyed it as an atmosphere or the visual impression of a landscape and a culture. Méditerranée was the first of his works where he used different panels painted in relief and marked a turning point in his practice.

AGi architects is currently developing a set of single-family homes in the Mediterranean, 5 Gems. Located in Marbella, on a hillside, they are oriented towards the sea views. In them the second floors fly over the garden, providing shade, protecting the pool and creating a space to enjoy the tranquility of the sea.